Whether it’s helping find survivors in natural disasters or giving critical intelligence to the military during armed conflict, 3D printing can now produce just the drone that is needed for any situation within a matter of hours.

A few months ago Virginia Tech hosted a 3D printing challenge that had students designing and building 3D printed drones. It was co-sponsored by Robotic Research and the DHS, and they were obviously happy with the results because Robotic Research is showing off two small 3D printed drone designs that bear quite a resemblance to the parameters of the Virginia Tech challenge.

As the military and our governments begin to rely on unmanned vehicles more and more in critical situations, the need for cheaper and disposable drones is becoming a necessity for them. Often rescue teams will have very little actual information about the conditions that they are entering into, so being able to take an assessment of their surroundings before selecting the drones that are required is a huge advantage. These 3D printed drones are designed to use identical non-printable parts that can be used in a variety of variant designs. So entire drones can be printed out suited to wildly different tasks, but all of them would use the same motors, sensor clusters and cameras. This allows emergency and rescue workers, and let’s be honest soldiers on the battlefield, to print drones on site with the specific environmental conditions and mission needs in mind. They would even have wireless access to a storefront with a library of 3D printable designs for virtually any situation and be able to custom configure a drone with task-specific attachments. 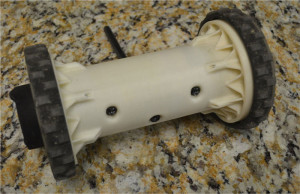 The first of the two drones showed off was the TOSR, a name that our immature British friends will most certainly chuckle at. TOSR stands for Throwable Orientation Switching Robot — also funny, but you may have to look for it a bit — and it is designed to be compact, fast and durable. The body would be printed from a styrene material and is shaped like a cylinder with two durable wheels, also 3D printed, on each side. The drone would carry a camera and wireless transmitter but is easily customizable in the field for a variety of environments and terrain. 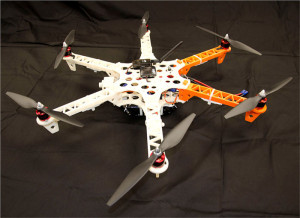 The second is the RAPTR or the Remote Aerial Payload Transport Robot and is the cooler looking of the two designs. The six rotored drone is designed to carry emergency medical equipment into dangerous areas only accessible via the air. The body is also easily adaptable to carrying different payloads — bombs — and can be adapted to the needs of virtually any task required.

There is a lot of hysteria surrounding drones. Some of it reflects valid concerns over governments with increasing abilities to violate our privacy, and as Shane pointed out last year some of it is simply the result of fear-mongering and paranoia. Drones can be used in a variety of situations that have little to do with war and death and can even help to save lives and our environment. But I’m probably not alone in believing that these drones will get a lot of usage in warzones. Most likely not with the DHS, but they will almost certainly be adapted to military applications considering what Robotic Research is known for. I don’t particularly like the fact that this is going to happen or that they are using our schools to do it, but much like the 3D printed gun what exactly is there to do about it? We can’t uncreate 3D printed drones, this was always an eventuality.

I think drones can be used in some remarkably innovative and positive ways. They can be used to help find survivors during times of disaster and even to patrol our animal reserves and national parks.  But we can’t pretend that they won’t be used to do some horrible things because other drones already have been.

As a technerd, drones are really pretty cool when you think about what is involved in making them work. But they also scare me a little bit. Not so much because I’m worried that I’ll be killed by one, but rather what they represent. The ability to detach the act of killing from the person doing the killing has been horrifying since the invention of the bomber, but technology, including 3D printing, seems to be making it easier.