It took me a while to digest Dr. Brent Stucker’s talk at the Inside 3D printing conference in New York, partially due to the highly technical language used in the talk.  Then, a bunch of personal stuff got in the way, so it’s taken me way longer than it should have to go back to it.  But, now, I finally got a chance to sit down and write it up.

What the University of Louisville scientist hopes to achieve with his team’s 3DSIM software, currently in development, is a sophisticated print preview for industrial 3D printing technologies. In his talk, Dr. Stucker explained that the quality control process for current 3D metal printing involves printing the same part over and over again until the process reaches a sufficient level of repeatability. This trial and error approach is neither cost nor time effective. 3DSIM seeks to bypass the need for such an approach through the simulation of a print before and during the actual printing process using complex algorithms and in-process analysis. 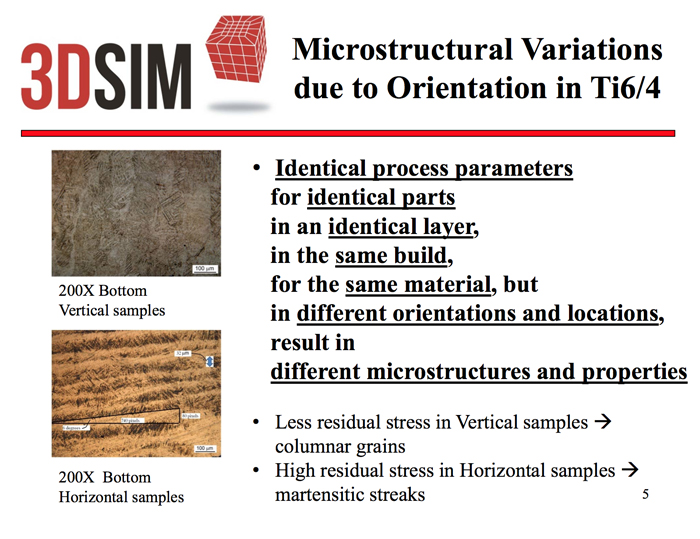 In developing his software, Dr. Stucker tested the 3D printing of identical titanium components with identical printing methods, changing only the orientation at which the object was printing. His team was able to demonstrate that, when printed vertically compared to horizontally, an object underwent residual stress with each later. Two parts, identical in design, were substantially different in physical form. Support structures, too, played a role in the ultimate quality of a print, as different supports supporting an object oriented at different angles would require clean up that could damage the integrity of the part. 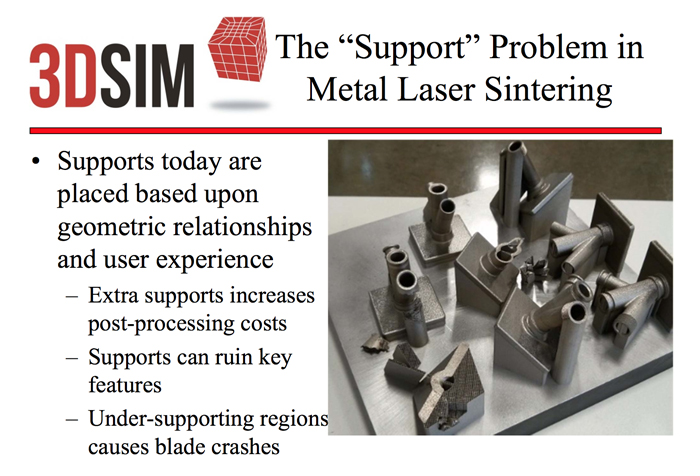 In order to attempt to predict these malformations caused by residual stress or support structure placement, 3DSIM will use a technique that combines the simulation of material properties and the simulation of the print process itself. On the material front, software will attempt to predict the crystal level details of a material and their consequential mechanical properties. In terms of process, the software will analyze how temperature stress and distortion will affect the resulting printed structure. 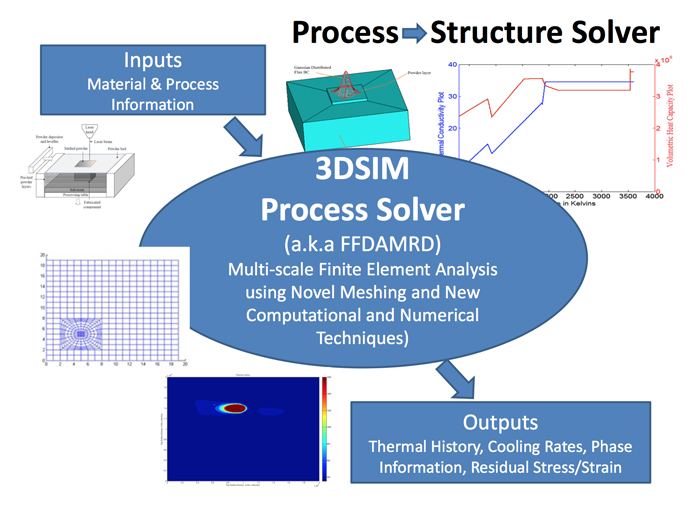 The actual mathematics and programming for how the software will achieve this is a bit over my head. Dr. Stucker made it clear that current analysis software has nowhere near the power to analyze the properties he is aiming for in real time. Neither do traditional computers. For that reason, 3DSIM will use a combination of finite element analysis (FEA) and an Eigensolver. Without going into (or understanding exactly) what these mathematical tools are, it sounds as though FEA is an accurate way to capture data, but requires immense computing power. Therefore, with 3DSIM, FEA will be used only at the location, the melt pool, where a laser is melting its material, while an Eigensolver computes the 3-4 layers away from the melt pool . Together, Dr. Stucker predicts that 3DSIM will run 66 times more quickly than ANSYS,  the engineering simulation software used by Toyota to analyze aerodynamics for their Prius line and by Astrobotic Technology and Carnegie Mellon University to perform structyural analysis for spacecraft. To achieve this, Stucker’s company will need to rely on $20-30k GPU computers.

There are still issues with Dr. Stucker’s process. As he puts it in an Inside 3DP slide, “Mode computations are hard to derive for new problems, it is only applicable to physics problems for which we’ve derived eigenmodal solutions.” In other words, 3DSIM works for physical objects and processes that have already been modeled, but work less well with new models. Stucker believes that his company will be able to overcome this obstacle. 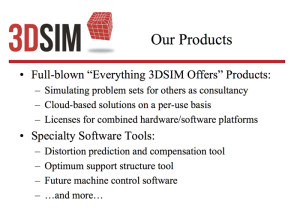 Once 3DSIM is ready for market, the company will offer all-in-one inclusive packages as well as piecemeal solutions. The “everything 3DSIM offers” products will include, according to his slides: “Simulating problem sets for others as consultancy, Cloud-based solutions on a per-use basis, and Licenses for combined hardware/software platforms.” They’ll also offer specialty tools like, “Distortion prediction and compensation tool, Optimum support structure tool, Future machine control software, and more.”

Stucker believes that his system will revolutionize industrial 3D printing. He thinks that 3DSIM will help current machine owners optimize their existing machines, as well as optimize materials. It will ensure quality control and the prediction of print performance before printing. Moreover, he believes that it will help AM manufacturers design better machine in the future. All of this sounded like the exact sort of thing that industrial OEMs are looking for.

I asked Dr. Stucker if he was at all involved with Sigma Labs or America Makes  And, in fact, he is. While he has yet to work directly with Sigma Labs, which is also developing in-process quality-control for industrial metal 3D printing, he explained that they’re both on the same America Makes project, titled “Development of Distortion Prediction and Compensation Methods for Metal Powder- Bed AM”, which is led by GE Global Research and also includes Honeywell and United Technologies. Together, Sigma Labs and 3DSIM may bring industrial 3D printing up to the level of traditional manufacturing in the supply chain. My last thought, in attempting to wrap my head around Dr. Stucker and his industrial 3D Print Preview, is: when is 3DSIM’s IPO?