CSI has kids (and adults) excited about hi-tech crime solving. I know this from the years I spent giving life skills classes to foster and probation youth. Every class would have at least one or two students interested in forensic science and their motivation was always spurred by watching one of the “millions” of CSI variants on TV. And, though there are schools teaching such crime solving to older students, Richmond County Schools in North Carolina are the first I’ve seen to use such high tech 3D scanning and 3D printing to teach the subject to such a young audience.

Jeff Epps, the head of IT at the middle school, helped procure enough technology to co-found their G.R.E.A.T. 3D Academy. Using an HDI Advance R1X 3D scanner from LMI, Geomagics software, 3D Max, and Cube X and Cube 3D printers from 3D Systems, the lab has enough equipment for students to explore a variety of concepts.  Most recently, students in the lab were able to apply 3D technology to forensic science.

Members of the Richmond County School’s 9th Grade Academy Teen Scene Investigation (T.S.I.) club went to work analyzing evidence at the scene of a hypothetical crime with their 3D scanners, software and 3D printers. To preserve the crime scene, students scanned such evidence as a body found at the scene, as well as finger, hand and shoe prints. The fingerprint, in particular, was transformed into a virtual b 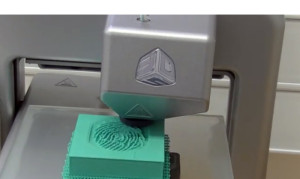 lock in Cubify Sculpt and 3D printed using their Cube 3D printer. Epps explained how the technology aided the TSI club: “This is a great way to really explore the process of crime scene investigations – with output that everyone can really see and touch in the real world. 3D tools like this allow the students to really understand something that has often been so inaccessible before.”