Eric Hunting has had it with the way that people are going about 3D printing buildings.  He doesn’t seem pissed or anything, just a little perplexed. And, in a recent Open Manufacturing thread on Google Groups, he’s started working out ways to improve 3D house printing.

Hunting’s two main concerns about 3D construction are related to the materials being used and the proposed methods of construction. For instance, USC’s Contour Crafting group and a recent Chinese endeavour have focused on 3D printing with concrete, which Hunting believes introduces some unnecessary weight restrictions. Additionally, the industry’s focus on printing of entire buildings on location , which would necessarily rely on large and complex machinery, makes 3D construction cost prohibitive for anyone without access to a lot of money. Hunting explains:

There’s a lot of hype today around the concept of 3D printed architecture. But it’s peculiar in that it is completely focused on the idea of very large size in-situ printing of whole buildings foundation-up using heavy extruded masonry materials…As I see it, in-situ house printing is going to long be stymied by the bulk and complexity of mobile hardware that, basically, has to span the whole volume of the structures being produced and, for some time, will take almost as much time and skill to set up as is necessary to build a house by hand from scratch. It’s industrial gigantism again. So it’s not going to be economical for a long time and it’s not likely to produce much open hardware. It’s going to be dominated by those with access to gigantic capital investment and, therefore, will probably not be applied in the places and situations this technology might most benefit for a very long time to come.

As for printing materials, Hunting proposes the use of recycled composites, perhaps made with wood. In the thread, he suggests that such material, which sounds a bit like Laywoo-D3 as he describes it, would yield compostable houses with “the look, feel, workability, sound characteristics, and even smell of natural wood,” saying:

[R[ecently we have seen the emergence of corn resin based wood composites that allow 3D printing of this very wood-like material likewise produced from recycled waste. This is potentially much more efficient than cutting sheet materials by CNC and, when combined with soy-based polyurethane foam, would likewise produce a structure that’s entirely compostable. Following the examples of things like the Modernist classic Venturo housing or using monocoque bay shells akin to the bay system of WikiHouse, these could be quite light and easy to assemble and quite comfortable compared to ‘plastic’ prefab houses of the past…

And, rather than 3D print entire, large-scale buildings on location, Hunting discusses the possibility of 3D printing micro homes, potentially using a robotic arm or a “cable-based Stewart platform or ‘robocrane.’” With a robocrane, Hunting believes that individuals with less capital would be able to construct small building components in a two car garage: 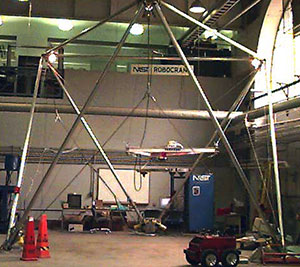 Winch modules could be readily mounted to ceiling, walls, and floor and digitally adjust for variable sizes of spaces. The air force has already used these systems to turn entire aircraft hangars into gantries for robocranes used as paint stripping systems for aircraft. For small machines, such positioning systems probably offer little benefit over more rigid structures and systems. But for a large area positioning system, this is probably the simplest most economical way to go about it. Turning a two car garage or some space in a warehouse or small hangar into a 3D printer to make monolithic bay sections seems technically feasible and potentially within the standard of accessibility for open hardware and the capabilities of small business and shoe-string entrepreneurship. And you could do this without necessarily having fully single-piece bay sections. You could divide them into two or four parts and still have most of their unit module advantages. The real challenge seems to be supply material to the extruders in sufficient volume and, of course, sourcing this material…

The conversation around the topic has only just begun, but one member of the group has already constructed such a robocrane system for the purpose of building Minecraft structures in real life using cardboard boxes (more on that topic tomorrow).  You can see a brief video of the IRL Minecraft crane below:

It seems that Ohio University may already have a patent for something similar to what Hunting is suggesting, though that doesn’t mean that he can’t pursue it non-commercially.  What the Ohio University patent describes is a robocrane gantry system using cables.  The patent is broad enough to include a variety of applications, but does mention construction in its introduction, even listing the work of USC’s Contour Crafting (CC) group and listing the problems of their design:

The CC process relies on manipulating the extrusion/troweling nozzle through a very large workspace. Since this manipulation primarily requires only Cartesian motion, a gantry system was used in Khoshnevis 1 to provide motion. However, in Khoshnevis 1, it is recognized that building very large structures requires an extremely large gantry robot, which may be impractical to build. Indeed, such a manipulator would be relatively large and heavy, with massive actuators. It would be impractical to transport and deploy at a construction site.

Regardless of the patent, Hunting’s thread brings up an important point. Will 3D construction be constrained by a prerequisite of large capital investment? Or can the Maker community develop some low-cost open source solutions to 3D print buildings in order for, as Hunting puts it, the technology to “be applied in the places and situations this technology might most benefit”?