This past week we travelled to Seoul to have a look at the goings on at this year’s SIMTOS (Seoul International Machine Tool Show) exhibition. The show’s primary purpose is to serve the needs of the manufacturing world. It is not a show for consumers, hobbyists or makers like the CES, MakerFaire or Inside 3D Printing shows we are more familiar with. Since Asia, in general, and China in particular, is currently the manufacturing centre of the modern world, we wanted to see what inroads 3D printing was making into these industrial manufacturing communities.

First organized in 1984, the SIMTOS show has been held every other year for the past thirty years. It brings buyers, exhibitors and visitors from all over the world to view and discuss the latest manufacturing technology.  This year there were over 850 companies, representing 35 countries, demonstrating their latest products to an estimated 110,000 visitors.  This massive show, the fourth largest in the world, spanned 10 exhibition halls and covered over 102,431 square meters of covered floor space.

We started our exploration and quickly sorted out the additive manufacturing exhibitors from the multitude of other technologies, but this alone took us an entire day.  As it was, the SIMTOS show had the 3D printing exhibitors mixed in with the robotics, CAD/CAM, automation, and measuring systems exhibitors. This led to some confusion for a few show goers…like us.

One of the first people we had the chance to meet with was Daniel Thomsen, General Manager for Statasys Korea, and his Marketing Manager Jihyun Lee. Despite having their booth overflowing with visitors, they were kind enough to take a few moments to speak to us about the fast evolving Asian/Pacific market.

“The hype (of 3D printing) is definitely here in Korea, with its big expectations,” Mr. Thomsen said, “at this show our numbers have exceeded our expectations.  In fact, I think that 3D printing should have its own section (at SIMTOS) now. People want to learn about this technology and its uses. Our industry is now identified as a useful tool within industry and our systems offer solutions for traditionally difficult manufacturing tasks. We have seen a lot of new comers wanting to learn and know more.”

Over at the 3D Systems booth, things were just as busy. They were showing both their large industrial ProJet machines as well as their smaller personal printers such as the ProJet 1000 and the CubeX. Show attendees had the opportunity to mill about and handle various printed parts and ask questions of the many staffers they had on hand.

In addition to the big kids on the block, there were several smaller companies present.  Some were simply resellers and others were companies working on their own products and innovations.

The first one we saw was the Korean company Rokit, which we have written about before. At this year’s show they took the opportunity to announce the release of their three newest machines, which caused a bit of a stir.  Since most 3D printing machines are manufactured in countries other than Korea, some people at the show expressed pleasure at seeing a “home-grown” company becoming a significant player in the market.

Another “home-grown” company that hasn’t seemed to get a lot of attention is Carima, a Korean manufacturer whose machines work on a high-end DLP (digital light processing) system. They had both their Master +Plus models and the new Master EV machines on display.  The staff were friendly and well educated about 3D printing technology in general. Unfortunately, we arrived at their booth around lunchtime, so most of the staff were gone and those that were “holding down the fort” were quite busy answering questions from business representatives.  We will try and follow up with them at another time.

InssTek, a Korean manufacturer of industrial machines, had one of their big ones with them. They brought a giant DMT (laser-aided Direct Metal Tooling) MX-4 machine, had it set up and operating so that visitors could walk by and watch it “printing” a new metal part out.   A video of the machine, as seen at the show, can be seen below

On more of the consumer side we saw several resellers who were there showing off products to help educate the public on the wonders of 3D Printing. While the machines they were selling may be familiar to many of us, to many show attendees, they represented something fascinatingly new.

One of the first that grabbed our attention was Sundo Solutions, a smaller company that was profiling the UP Plus 2, the UP Mini desktop 3D printers, and the Inspire series of larger printers.  Many of our readers may be already familiar with the UP printers, or their Afinia alter egos.  These little machines (and their Inspire big brothers) were generating quite a bit of buzz, among the people who crowded around to watch them humming along building one demonstration model after another.

According to S.C. Park, CEO of Sundo Solutions, the growth of the popularity of 3D printing in Asia has a few, if not common, issues that need to be resolved. “It has been a great show this year. Koreans now have a growing interest in 3D printers, but they have some unrealistic expectations regarding the printers’ capabilities.  There is a big gap between AS-IS possibilities and the TO-BE potentials. When I talk about current 3D printing capabilities I compare it to agriculture. For example, many people have cultivated vegetables in small gardens in their homes, but most foods are still grown on farms. I think the near future of 3D printing and manufacturing will be the same.  A lot of things may be made by home users, but most things will still be made by mass production due to quality, cost and safety.”

Another exhibitor was 3Developer, a Printrbot reseller, who had a number of Printrbot Simples on display, all chugging along and printing like crazy. In addition, they also carried the Ultimaker 2, which looked to be fresh out of the box, still with its English language instruction book sitting close by.  As readers here may guess, most of the attendees crowded around this booth were of the younger set. Older business people passed by this booth, often casting a curious look, but rarely stopping. 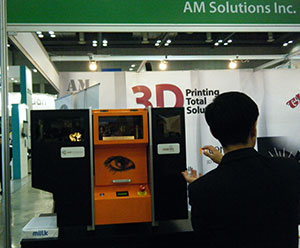 AM Solutions, a systems reseller, was profiling a mix of different technologies that seemed far more popular with the business class. They had the Mcor Iris, which produces its finished 3D printed models in full colour. It was busy all day long churning out a variety of models that were then put out for examination. They also had the Lithoz LCM (Lithography-based Ceramic Manufacturing) machine, which binds ceramic particles together in a UV curing liquid resin, which can then be sintered. They also profiled their new BeAM CLAD (Direct Additive Laser Construction) which, unfortunately, we didn’t have an opportunity to inspect.

All in all, it was a great show. It was great not because of any one thing that was announced or demonstrated, or even because of what the crowds saw or experienced, but rather because of the promise of what it helped to usher in. As Chris Jang of Prototech (a Stratasys reseller) told us, “People don’t know exactly what a 3D printer is, and those that do are (currently) limited in number.”

While this show was for business professionals, the number of younger people and curious onlookers was heartening. In a culture where most young people dream of getting a job with a large multinational and being part of a corporate team, the freedom and power that decentralized manufacturing promises may prove to be not only an industrial disruptive technology, but it may also prove to be socially disruptive as more and more young people opt to form their own companies and explore their futures in a more independent and creative way.

We can’t wait to see what to see what the general public’s reactions to this technology will be at the “Inside 3D Printing” show in Seoul this June. Stay tuned.