For comic book fans, conventions are places to go to see old friends, buy things that you can’t find locally, over-pay for bad food and discover the next big thing that everyone will be talking about tomorrow. At this year’s WonderCon in Los Angeles, comic fans discovered 3D printing thanks to the brothers behind CoKreeate.

I had a chance to hang out with Will and Andy Co at their booth for a bit last weekend and talk to them about their business, the 3D printing industry and their future plans. The brothers are certainly trying to create an industry where one hasn’t existed before, and while that may be an uphill battle, Andy and Will don’t think it’s an unwinnable one. My friend Tony took some video of the convention and of my conversation with Andy.

As you can see from the background of this video, the CoKreeate booth, and their Bukito 3D printer, were constant sources of interest for the con goers and comics fans milling past them. The crowds often created massive traffic jams, and I lost count of the amount of people truly excited to watch a 3D printer at work for the first time. Will and Andy were in the booth as often as possible, aided by an army of family and friends, to help answer all the questions they may have had about 3D printing. Their targets were some of the amazing cosplayers in attendance and they did manage to get about five people in total to stand for scans, tucked away in convention center halls and doorways, for statues of themselves. But while the Bukito may have been what drew the crowds in, the statutes and photo extrusions printed on CoKreeate’s full color Zcorp 3D printer were clearly the stars of the show.

The CoKreeate guys have told me about a few of the big names that they have lined up to get 3D scanned in the future, so there is definitely some serious interest in the services that they have to offer. CoKreeate is less than a year old, so only time will tell if Will and Andy’s plans for their business will take off. The beauty of the 3D Printing Industry is the fact that no one really knows what’s going to happen next or what’s going to catch on. But 3D printing is always a conversation starter, and the CoKreeate brothers are proving themselves to be very good at keeping that conversation going. 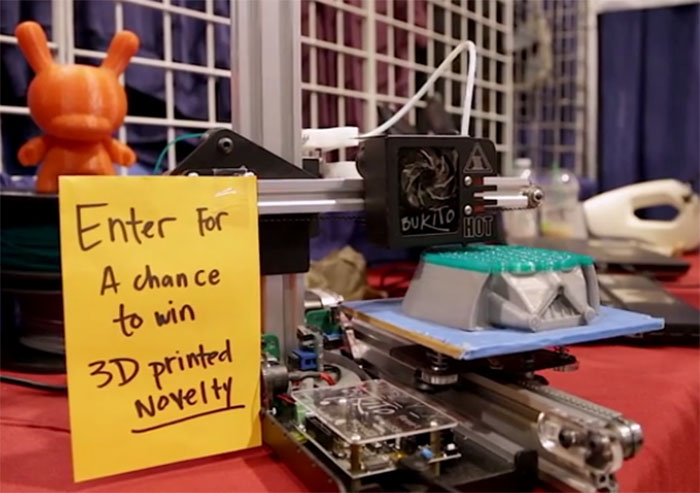 If you’re in the LA area and would like a custom statue then hit the CoKreeate guys up, they’re mobile and more than willing to pack up their scanner and laptop to come to you. Costume encouraged, but not required.

Videography and editing by Anthony Hofmann.