A Two Part Review of 2 3D Scanners, Part 2: the Structure Sensor from Occipital

Coinciding with my review of the Sense 3D scanner from 3D Systems, I had endured the eeriest experience. In capturing a 3D model of my bearded dragon, Shanté, with my wife, Danielle, I had somehow lived out a vision I’d had when I was three. A flash of precognition told me that, one day, I’d scan my pet lizard, perhaps as part of some grand design. But, after 3D printing the replica of Shanté, something told me that that design had not been fully revealed, that there was still more left to do. And, when we received a Structure Sensor from software development firm Occipital, the future, once again, began to unfold. 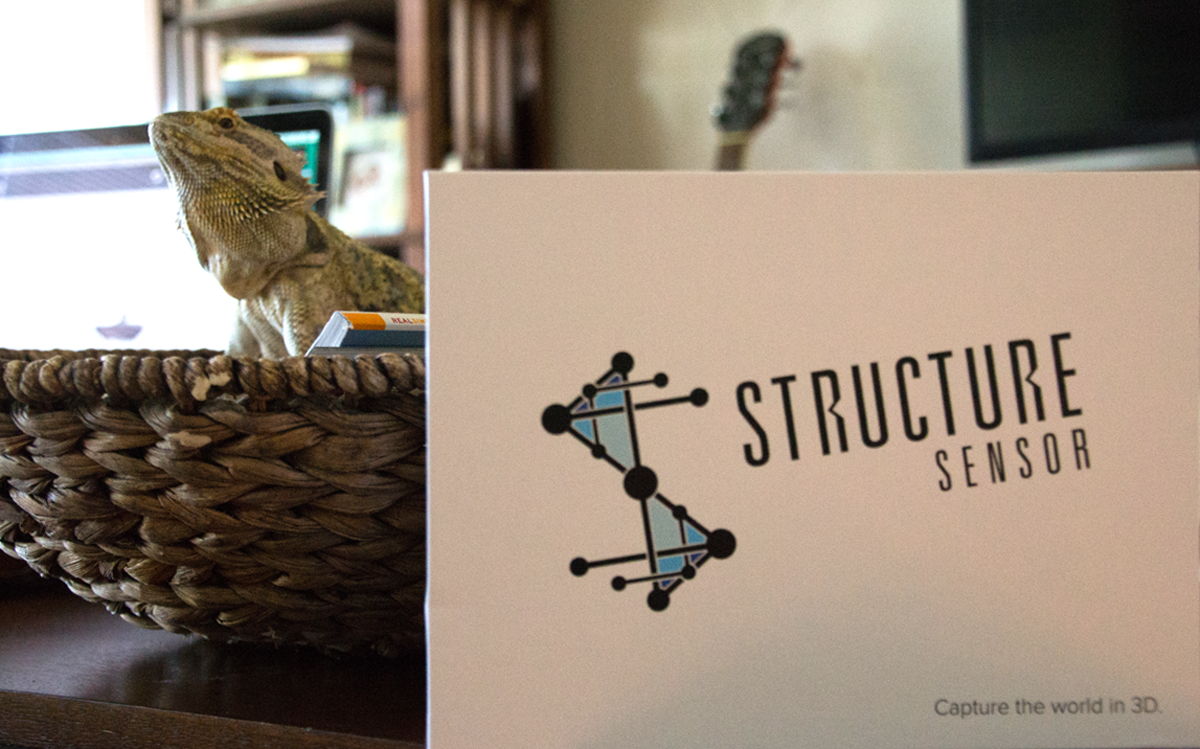 The packaging of the device was similar to that of the Sense. Simple, white and elegant. I’d wondered if the branding of the Structure, as it had been licensed to 3D Systems as the iSense, was meant to mirror that of the industry leading 3D printer manufacturer. Or, maybe, this is just the route that product marketing has taken after the success of Apple. Regardless of the reason, I valued its simplicity. 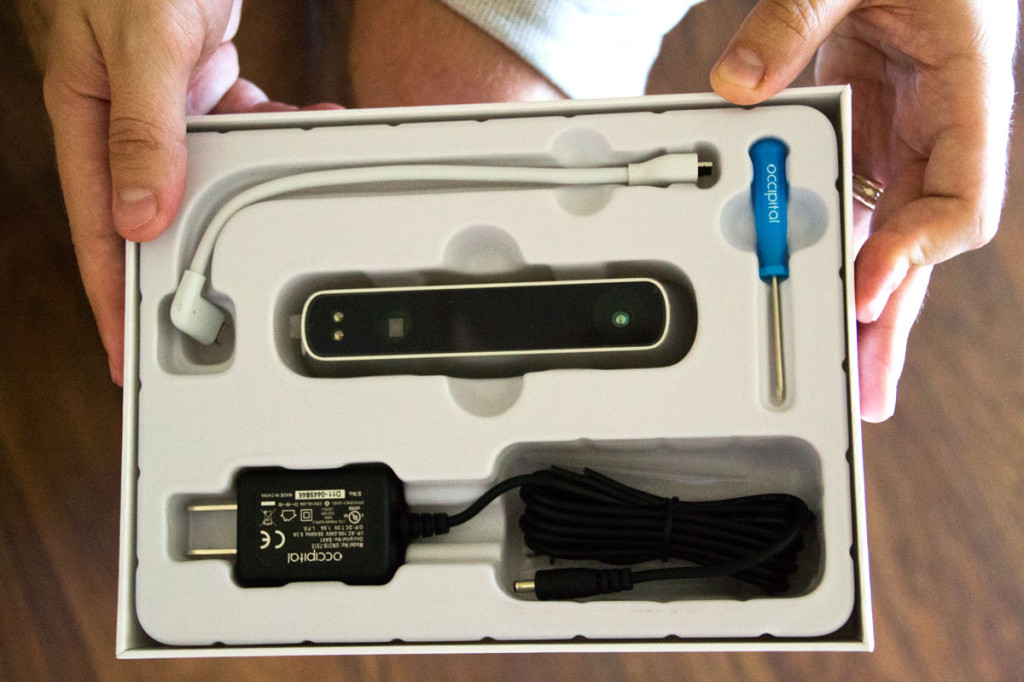 More importantly, I valued the fact that Occipital had been kind enough to send an iPad Air for me to test their scanner with. See, at the moment, the Structure and the iSense work only with newer generation Apple tablets, the iPad Mini (Gen 2, with Retina Display), iPad Air, and the 4th Gen iPad. That doesn’t mean that it won’t later be outfitted for other devices, but the scanner does currently require the more powerful capacities of the newer Apple tablets to run its software.

The device itself uses similar technology as the Kinect, because the Occipital team consulted with Kinect’s manufacturer PrimeSense when developing the Structure. Though the Kinect is a bulky piece of hardware that plugs into an outlet, the Structure attaches directly to the tablet, relying on its computing power and camera to render 3D models of one’s environment. With a software development kit, the device is designed to be hacked to create apps that can fully take advantage of its 3D technology. When I received it, there was only one official app that had been made for the device, itSeez3D, but it was perfect for my 3D scanning and 3D printing needs. 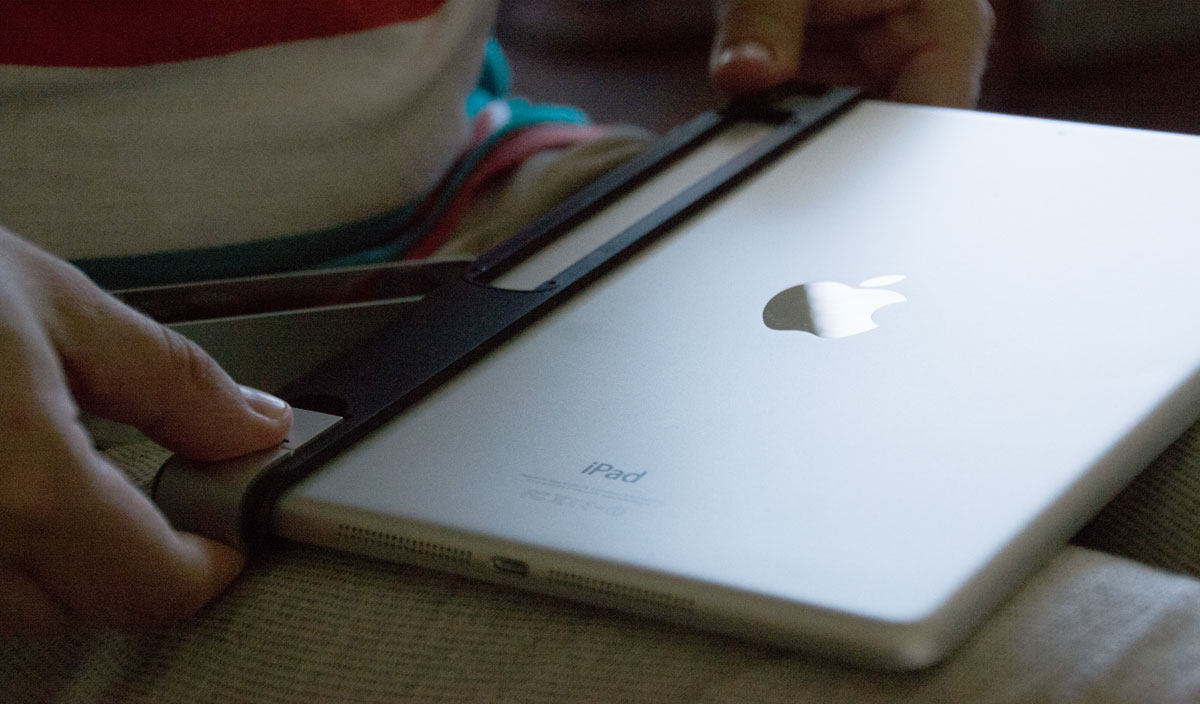 I pulled out the Structure and found a convenient, branded screwdriver with which to attach the scanner to the iPad on its custom-designed bracket (even the bracket itself can be hacked by modding and 3D printing its CAD file). After a minute of dainty manual labour, I was holding a tool straight out of science fiction in my hands. Something that could not only see the world as a human does – in three dimensions – but as a superhuman might, with infrared cameras, the ability to see through walls, and measure distances instantly. And, as such sensors are integrated directly into the next generation of tablets, I’d it’s only a matter of time before we’re using them all of the time. Occipital is already prepared for such a day, attempting to enable an entire ecosystem of apps that would work with such pieces of hardware. 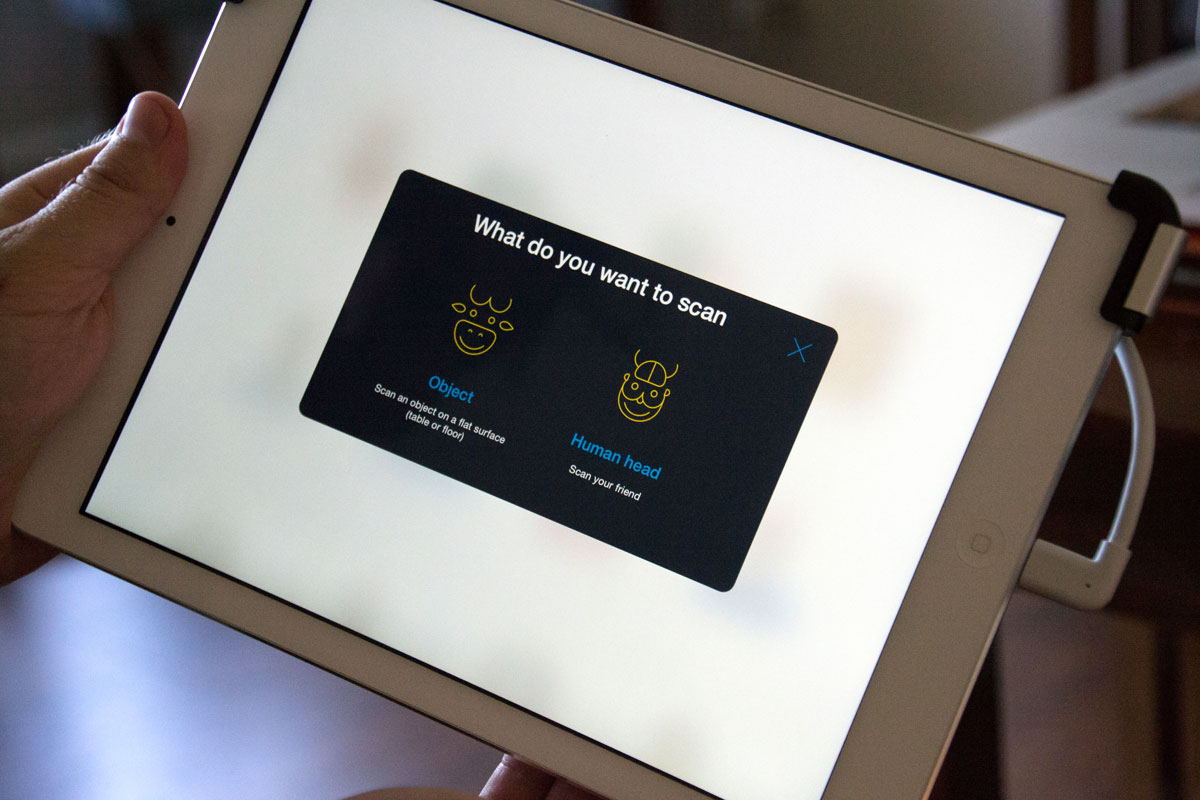 In person, I’d seen some of the sample Augmented Reality software Occipital had written, when Danielle and I had visited them at CES in Las Vegas earlier this year. The apps allowed users to scan a small swatch of their environments, instantly creating 3D models. The models would then allow users to play fetch with digital dogs or drop balls in the augmented physical world through the iPad. The merging of the virtual and the real was definitely of interest to me, but something was moving me, like a Ouija planchette, to head straight to the Itseez3D app designed specifically for the Structure Sensor. 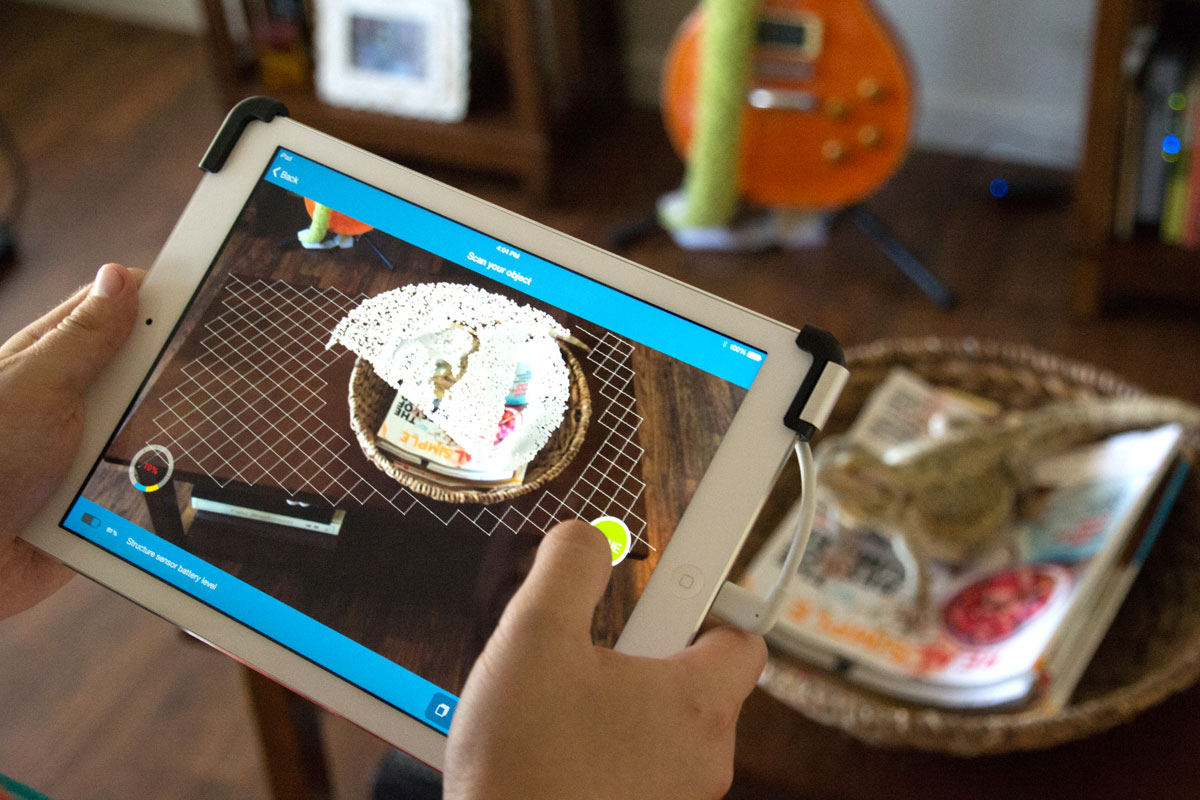 The app was a breeze to work with. It had a similar layout to 123D Catch, the free Autodesk app meant to create 3D models from a series of photos, but, thanks to the power of the Structure, the models were flawlessly rendered, with no manual stitching on my part. Stepping around a subject, the software automatically snapped 3D pictures. When it came to small objects, such as a candle holder or a mug, I had difficulty obtaining an ideal model. And, attempting to scan our bearded dragon proved even more difficult. As she watched me circle around her, it was impossible to obtain a model in which she didn’t have more than one head (For this reason, Shanté preferred the Sense). Then, you can export the file as an .obj or .ply with full-color texture maps.

It wasn’t until my wife and I began scanning each other that anything out of the ordinary occurred. We took turns passing the tablet to one another and creating flawless 3D models. But, soon, it wasn’t enough to simply capture ourselves in 3D. We became possessed by alternate personalities. In a dizzy haze, we began scanning ourselves making absurd faces, to see just what the Structure could capture. Shanté looked on at her owners with a determined look in her eyes. 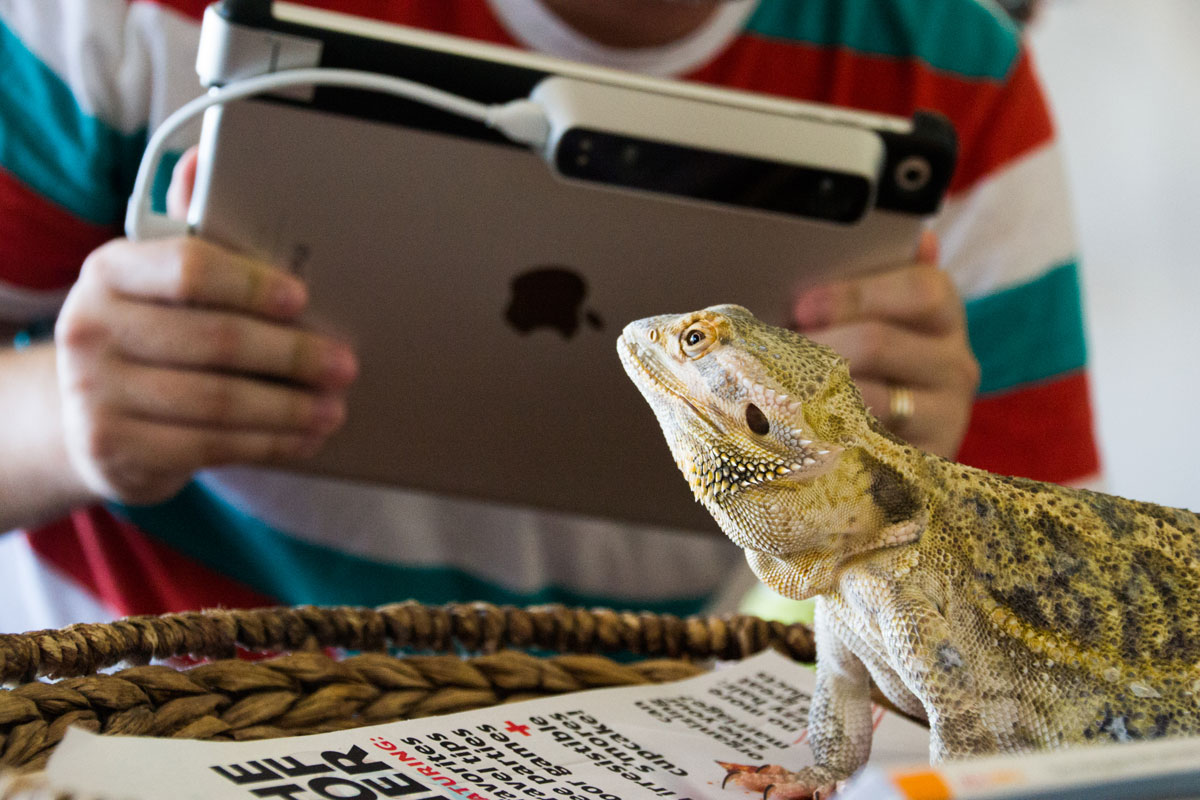 The days that immediately followed are blank to us now and we were left only with the models created with the Structure and the Itseez3D app. When we awoke, sprawled out on our living room floor, we picked up the iPad and swiped through the scans, expecting to see ourselves, but were instead faced with characters we didn’t recognize: a toxic drunk from a dystopian netherworld, a woman forever ensnared in a mouthless scream, a mysterious lion pimp, and some sort of lizard human hybrid.

“Who are these… things?” my wife asked.

The last model made us wonder if Shanté had something to do with this. Was she controlling us with her mind? Maybe showing us visions of a not-too-distant future populated with cyberpunk creeps living in the rubble of an annihilated city? This theory stuck with me for days, as I returned to my daily life, working and writing for 3DPI. It wasn’t until a handful of 3D prints, purchased through Sculpteo and i.materialise, arrived at our doorstep.

When I picked up the package, my memory was temporarily unlocked and I caught a glimpse of the ordering process. I remember requesting these prints through Sculpteo, despite their fears that the prints might arrive chipped and damaged, telling them that I would be responsible for any defective prints. And, I also remember that the prints from Sculpteo, 3D printed in full-color on a Zcorp 3D printer, ranged in the $20-$35 price range. Then, the memory disappeared and I was left, once again, in the ignorance of the present. 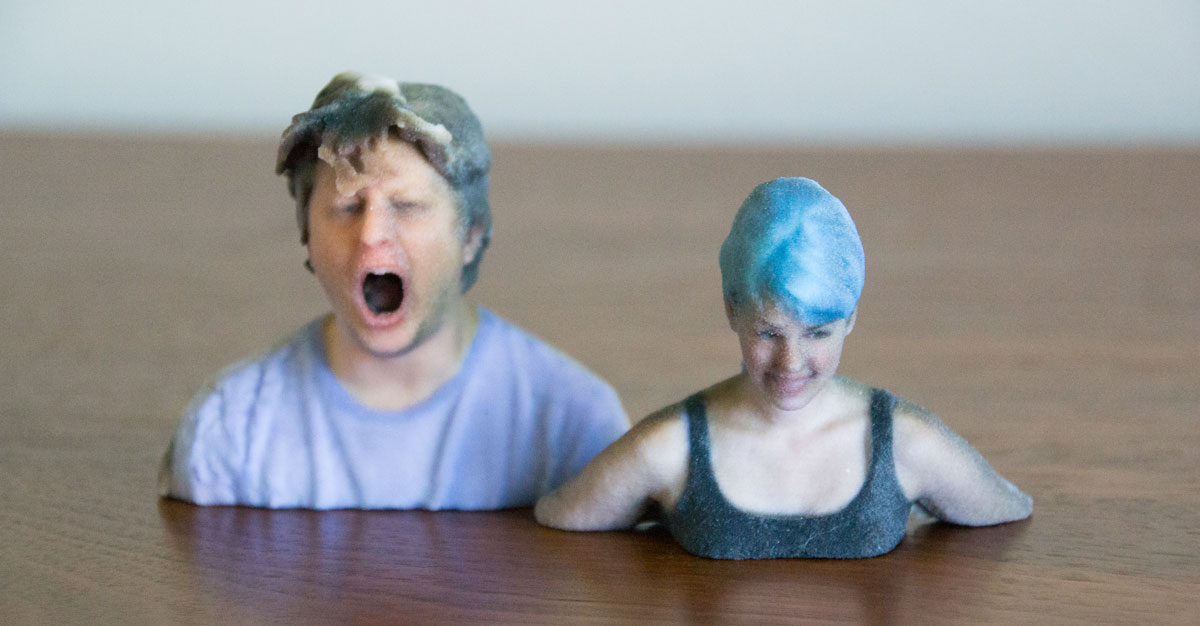 Opening the prints, which had arrived without any chips or defects of any kind, I saw two small busts of Danielle and I. In mine, I was screaming, for reasons unknown. And, with Danielle’s, she looked absolutely normal, but was wearing a blue, beehive wig, also for reasons unknown. These prints were off putting enough, but when I pulled out the next busts, a chill ran through my spine. 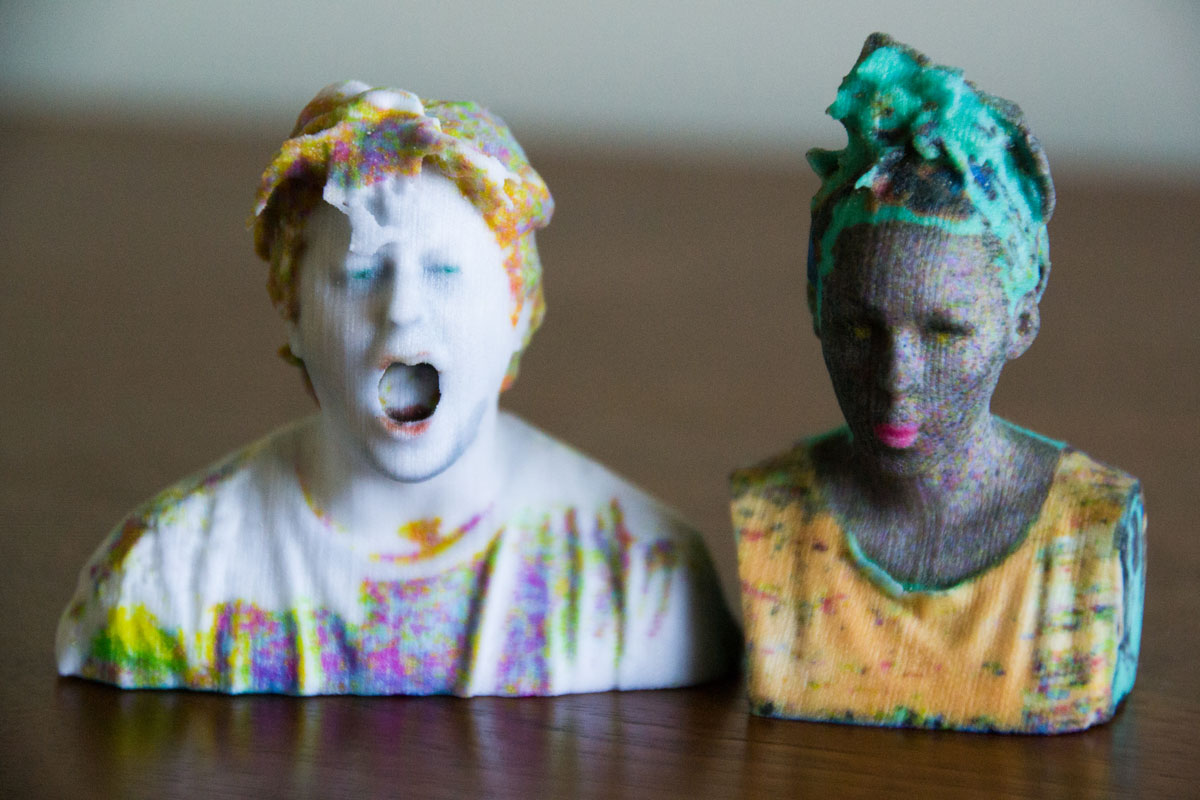 They, again, looked like my wife and I, but were coated in an otherworldly color palette, as if someone had altered the texture maps for our 3D models in Photoshop, selectively painting the hair, the skin, and eyes and, then, applied all sorts of filters (as demonstrated in the video below). We picked them up and examined them closely. Looking deeply into their eyes, a pink light penetrated our consciousnesses, directly through the pineal gland.

The entirety of the Universe roared past and through us. The Big Bang, followed by the formation of the cosmos, the Earth, and even our own lives played out. It continued onward until everything ended and, just when we’d thought it’d come to a stop, we witnessed what happened before the Big Bang, non-universe hanging there for eternity… until it all began again, repeating the cycle faster and faster countless times until we arrived once more at the present.

And, then, there we were in our everyday lives, holding a couple of colorful statues of ourselves that we’d made with a consumer-grade 3D scanner, a simple and well-designed app, and the services of a couple of 3D printing companies. At a price tag of of $379, the Structure Sensor had turned an already powerful handheld computer into an ultra-powerful scanning and sensing device. With a third-party app, it made scanning human heads as easy as using Facebook. And by directly uploading the models created with itSeez3D to Sculpteo and i.materialise, we had 3D printed figurines of ourselves made in a couple of weeks at about $30 a pop. 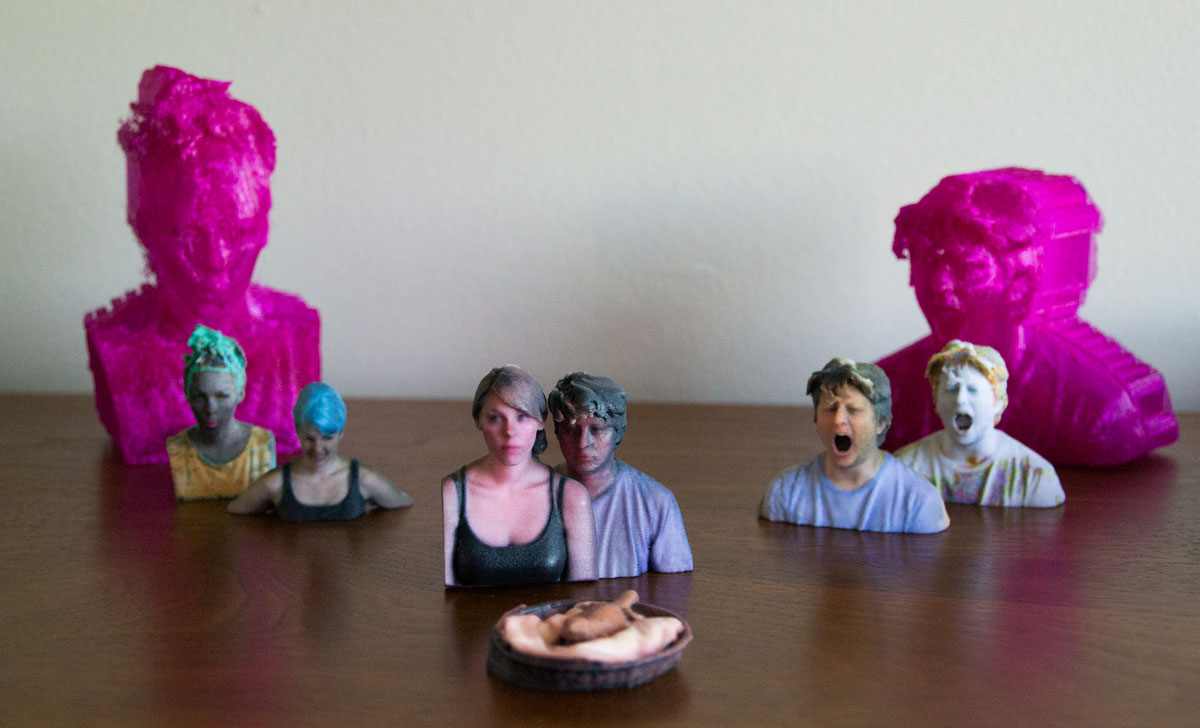 So, that was that. We placed the models on our nightstands and went to bed, preparing for another day of work, that would likely be followed by watching TV on the couch with our bearded dragon, Shanté.

I turned over and looked at that glitchy version of myself, some replica, a mere representation of the entirety of my being and thought:

“What does a scanner see?… I mean, really see? Into the head? Down into the heart? Does a passive infrared scanner [see into me]–into us–clearly or darkly? I hope it does [see clearly], because I can’t any longer these days see into myself. I see only murk. Murk outside; murk inside. I hope, for everyone’s sake, the scanners do better…” 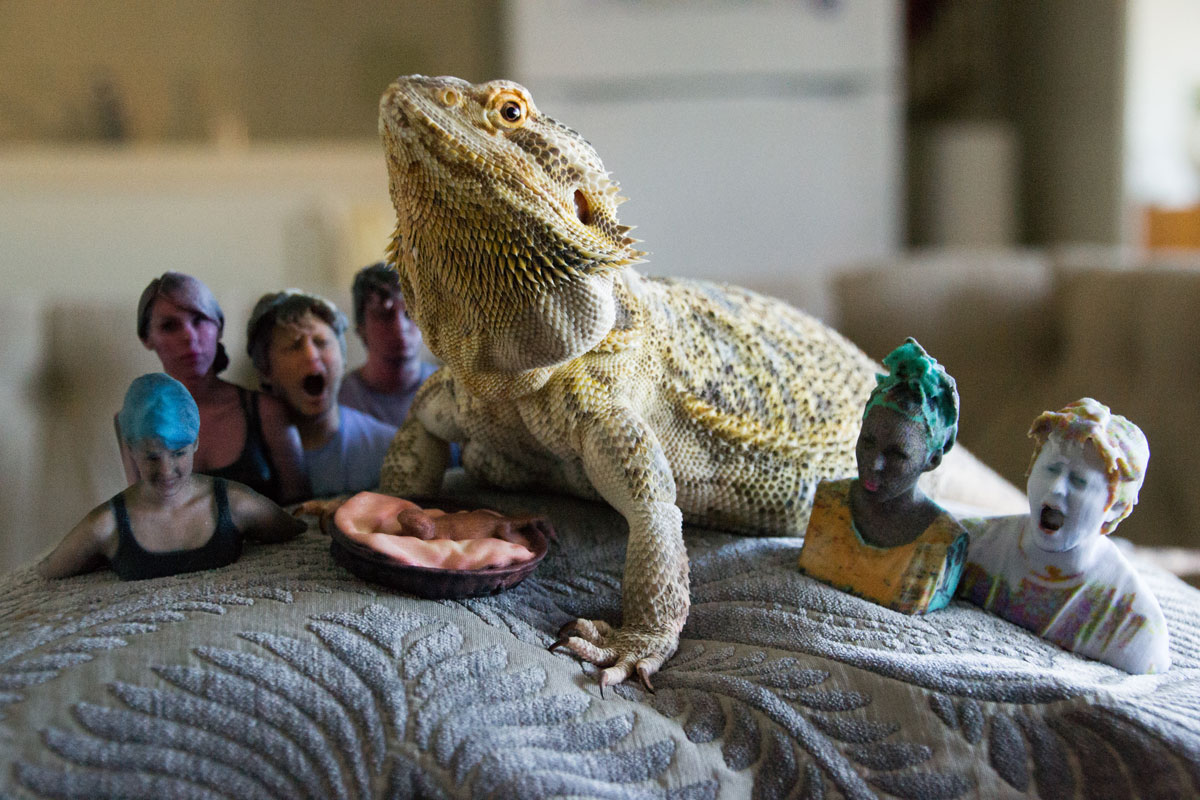 More on this topicCrowdfunding & The Low-Cost Desktop 3D Printer: A Suicidal Race To The Bottom? (Part 7)
More on this topic3D Printing Documentary "Print the Legend" to Debut on Netflix Sept. 26