A Two Part Review of 2 3D Scanners, Part 1: The Sense from 3D Systems

When I was three, I remember laying in bed and looking up at the ceiling. All of a sudden, I experienced a flash — a vague blur, like a hazy video playing out in my mind. I saw myself holding an object from the future — a device — and moving it about in the air, circling around a strange, enigmatic lizard. Then, the flash was gone, but the memory of it remained.

Twenty-seven years have passed and, since then, two important developments have taken place, things that have guided the course of my life from that point: 1. I have since become fascinated with 3D scanning and 3D printing technology and 2. I bought a bearded dragon named Shanté for my wife, Danielle. Since purchasing her (the lizard, not my wife), I’ve been driven by some strange impulse to scan her, but it wasn’t until I was a sent a Sense 3D Scanner from 3D Systems to review, that I’d been able to do so. And, soon, that ethereal flash I had when I was three would manifest itself into reality, like a 3D scan translated into a 3D printed, physical object. 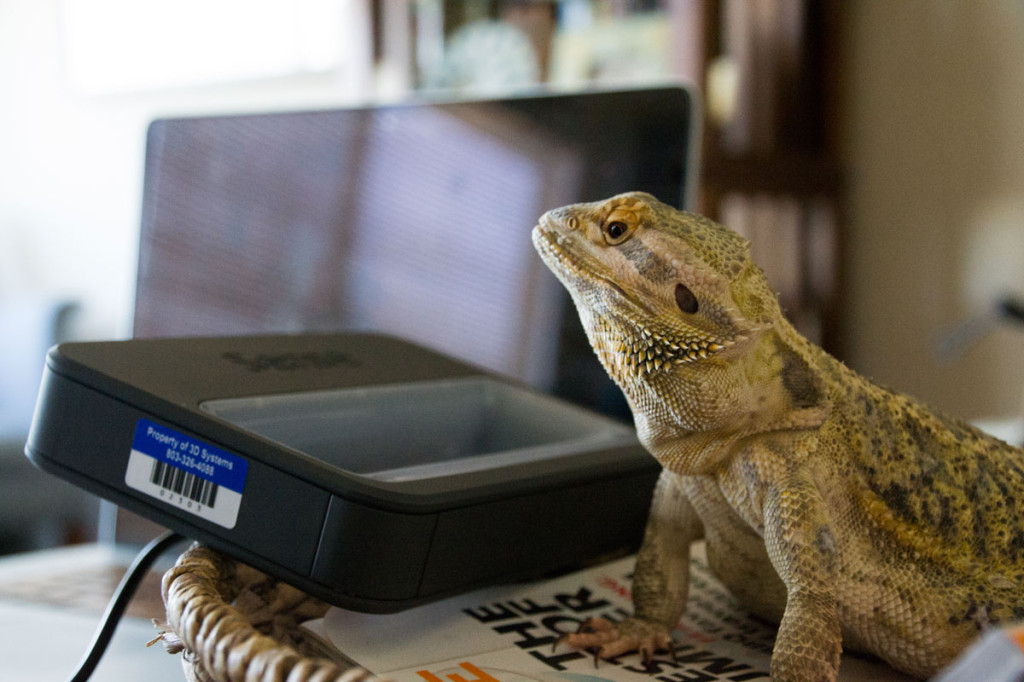 The Sense, it’s suggested, is a low-cost, handheld 3D scanning device meant less for industrial use and more for consumers. Removing the device from its sleek, white box, it resembled a futuristic staple gun, trailing a USB cord that would necessarily be hooked into a computer, Mac or PC, to send 3D data to 3D Systems’ own Sense software. First starting a Cubify account and, then, registering the device, I was able to download the program quickly and easily.

Initially, my Mac struggled to recognize that a device had been plugged into its USB port, but, because that port had been giving me trouble anyway, I reasoned that it had little to do with the device itself. So, I tried with my wife’s PC, downloading the package, registering the scanner, and launching the software with no hiccups.

A simple blue screen presented me with two icons, a human head and a guitar. Underneath each image read “Person” and “Object” respectively. Jumping immediately to the good stuff, I selected “Object”, to appropriately scale the scan to the size of our bearded dragon, and subsequently chose “Small Object” because, well, Shanté is maybe 12 inches long and 5 inches wide, at her widest point. 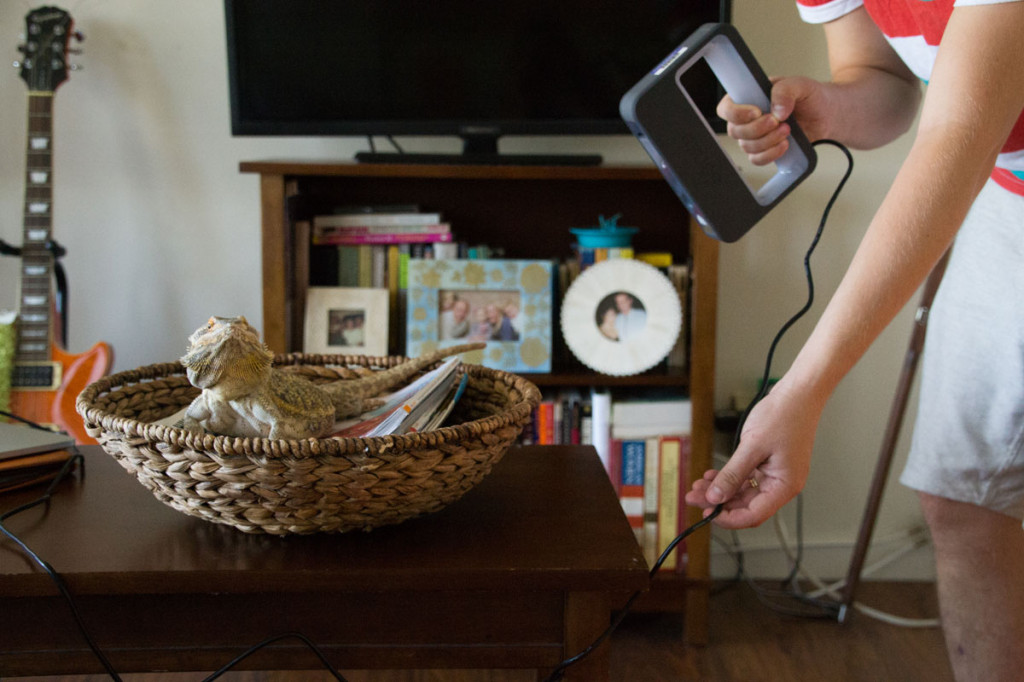 Because the Sense is tethered to a computer via USB capable, scanning with it involved some interesting techniques. First of all, a laptop was definitely required, which couldn’t be plugged in, as the Sense software was a bit sensitive to sudden, jerky movement. When I tripped trip on the computer’s power cord or snagged the Sense cable on the edge of a table, the scanner would lose tracking. It was possible to realign my scan to begin from where I left off, but it was not always easy when scanning a living, breathing person. For this reason, objects and very still lizards like ours seemed a bit easier to capture.

A few times, I attempted to have my subjects spin, so that I wouldn’t have to move around them and potentially lose tracking. For instance, Danielle would twirl slowly or I’d rotate an object with my fingers in front of the propped-up Sense, but the device, I think, required a stable background against which to map the 3D data. So, when I tried this, I lost tracking much more quickly. It was, therefore, necessary to hold the Sense against the back of my laptop with one hand, while scanning, because I didn’t want to create a jig or tape to attach it to my computer more easily. 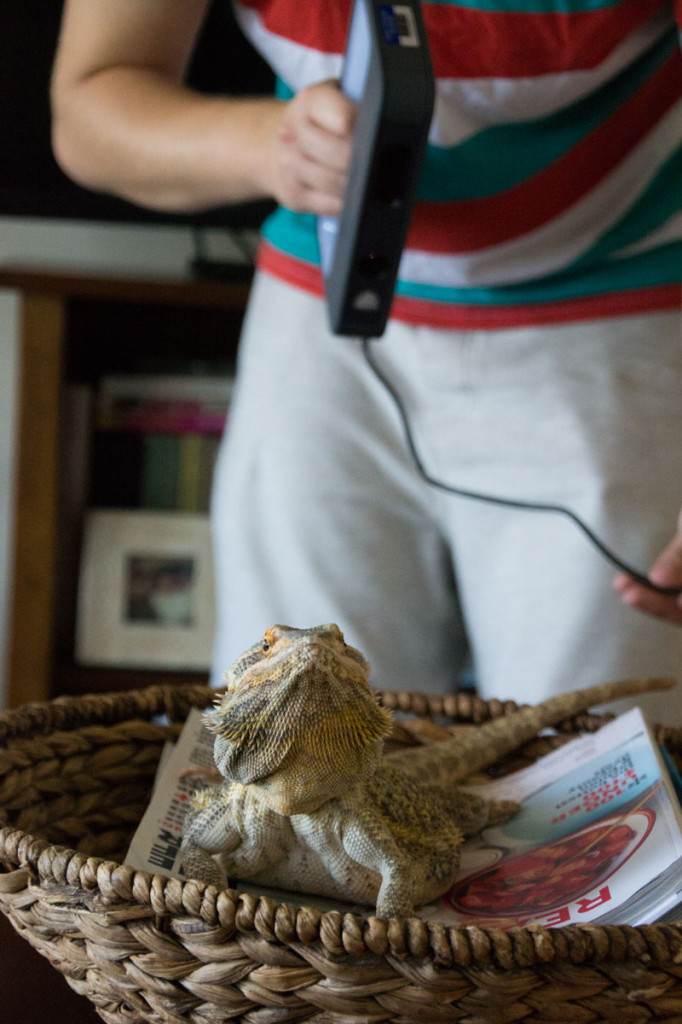 After managing to slowly tip-toe my way around my subject, the corresponding 3D model was instantly generated in the Sense software as a watertight (hole-free and printable), full-colored model. The program took me through a straightforward, two step editing process. First, I was given the option to crop extraneous material out of the model, clearing up such unneeded objects as the coffee table that Shanté rested on. Then, I was able to clean up a bit more accurately with the erase tool and, in the case that I wiped out a vital part of our lizard, the solidify tool sealed the model up and made it printable again.

Next, I was presented with options to export my file in .ply format or to upload it to Cubify for 3D printing through their own services. In the time that I had the Sense, I had difficulty managing the size of my models through Cubify’s service and, in general, I just liked to have a copy of my own files on my computer anyway. Plus, I kept forgetting my Cubify password. You can watch screen captures of the scanning and editing process in the playlist below:

With the powerful 3D scanning tool, I was able to scan a variety of objects and people around the house, including a Frank Lloyd Wright candle holder (demonstrated in the videos above), with which I entertained ideas of pirating copies of costly knick-knacks. Danielle and I also had fun scanning each other. The only issue was that we twitched a little too much and had trouble capturing us making funny faces. We also experienced a strange issue that may have resulted from the lighting in the room in which, as soon as we circled behind one another, the scan would go blank. It didn’t lose tracking, it just didn’t register any data. In the end, our models weren’t quite as expressive as we’d liked and they were completely flat in the back. 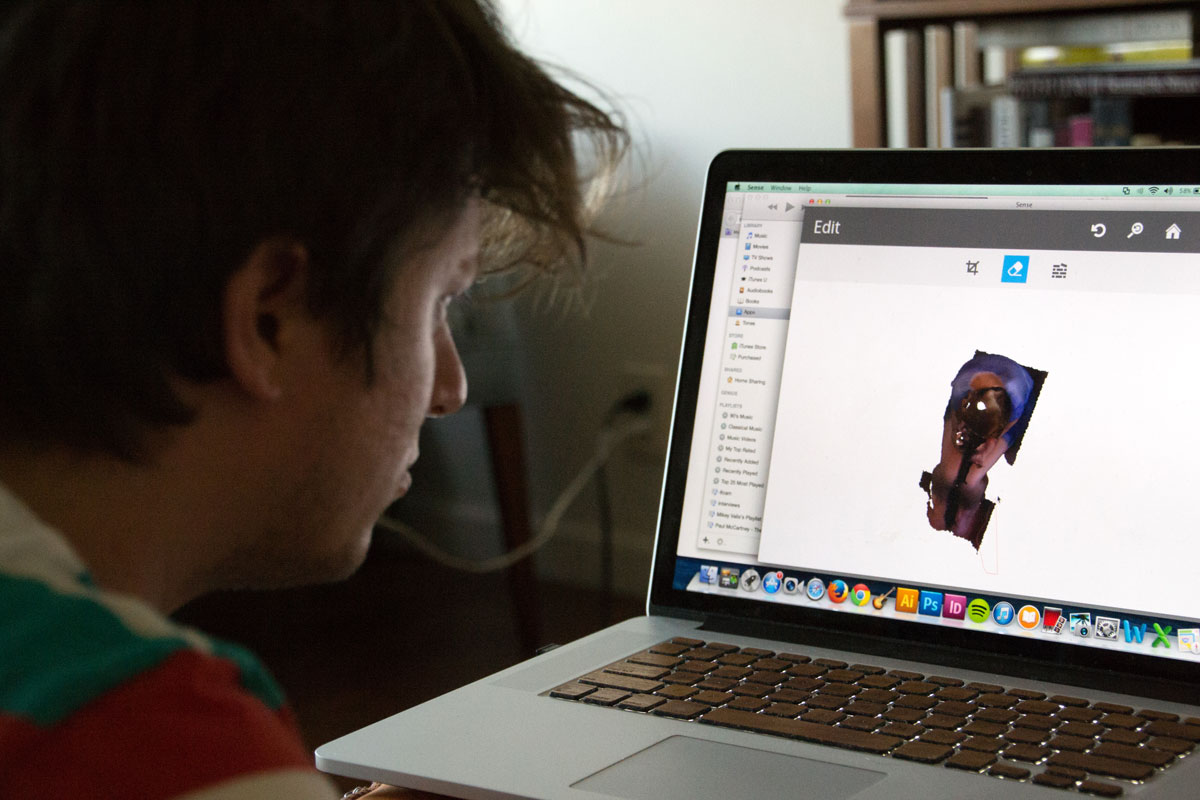 Shanté, on the other hand, was almost perfect for the device. Rock-like as she is, we assumed she’d remain still for our scans, but, she was curious enough about the Sense that, as I passed her, she would gaze up at me, cockeyed. This resulted in scans of our pet lizard with extraneous heads, too unsightly for 3D printing. It was also impossible to scan her head alone, as it was too small for the Sense to register. 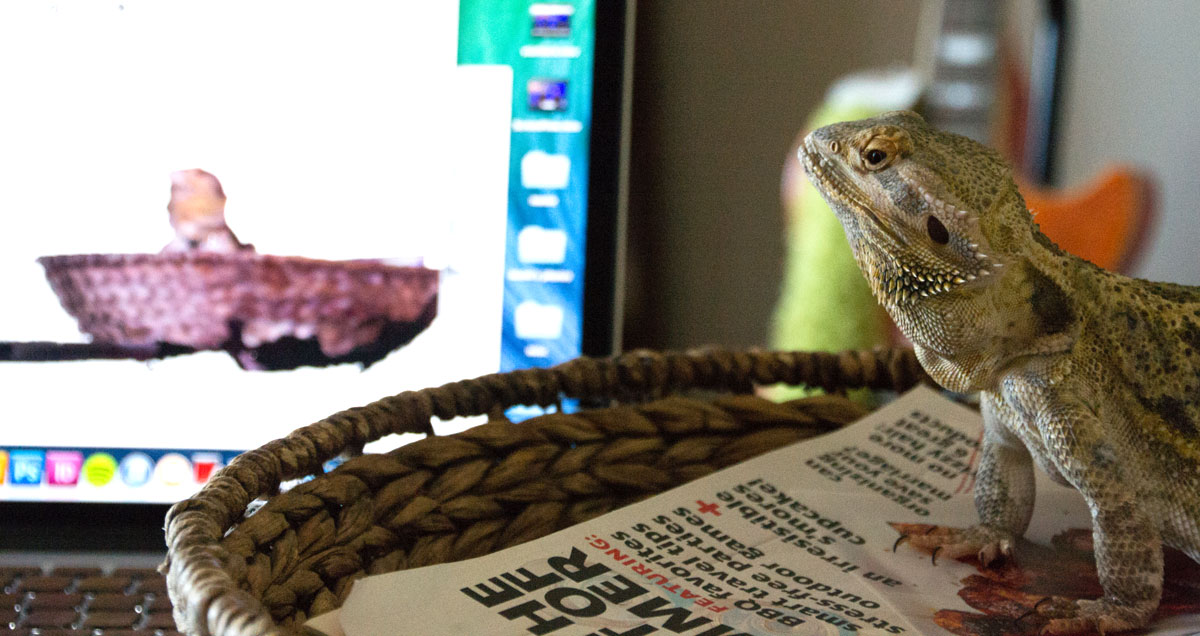 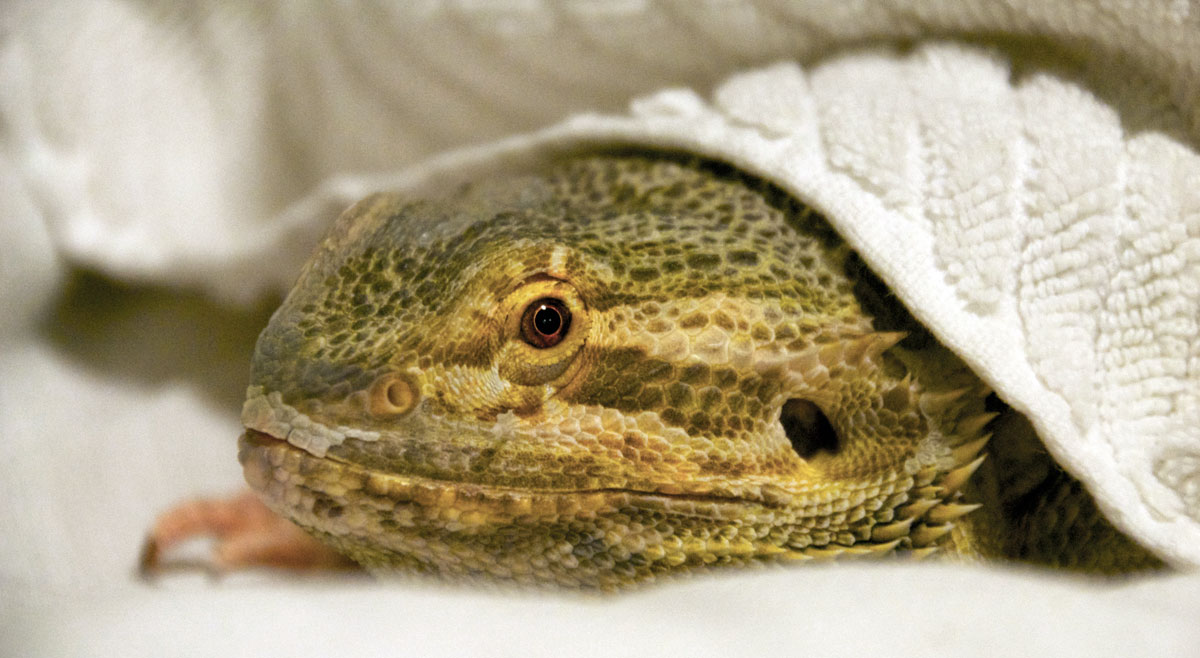 Rather than rely on the left half of my brain, the rational, reasoning side, to make a 3D model of Shanté, I decided to use the right hemisphere, summoning my subconscious and letting my intuition guide me. I closed my eyes and the flash returned, resonating from deep within my pineal gland. Next, the lids of my eyes lifted and I found myself carrying Shanté on a basket, draped with her blankie, until she fell asleep.  Once the altar had been prepared with a white sheet – perhaps for better scanning, or maybe in some act of ceremony – I removed the blankie from her head and began.  As if caught in a ritual that my body somehow remembered, I hovered about the strange, enigmatic lizard, moving the futuristic device about, capturing the scan. 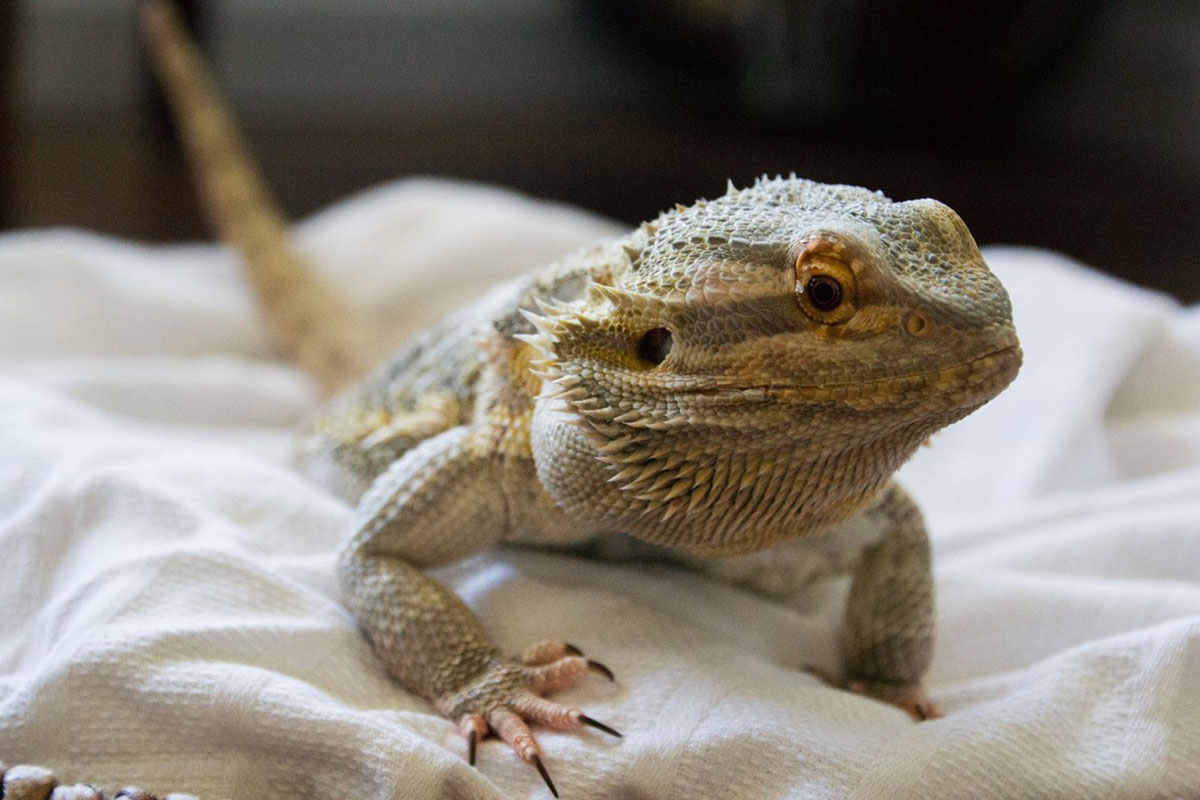 As it completed, the room went black and a stream of what can only be described as “everything” flooded through me. It was only after Danielle wrapped me in a tender embrace that my consciousness returned and I awoke. I was unaware of how much time had passed. It felt like years, but Danielle assured me that it had only been minutes. Not sure how to proceed, I returned to the deeds of my daily life and set about ordering 3D prints of our scans online. As ordinary as I appeared from the outside, beneath the surface, a cold chill remained.

To 3D print Shanté, and her mommy and daddy, something moved me towards i.materialise. Shapeways would not allow us to upload .ply models and I was unable to extract the texture maps from the full-color scan, in order to send a different format to Shapeways. I also tried Sculpteo, but, after already purchasing the order, their customer service told me that, due to the fragility of details like hair and Shanté’s tail, the service bureau was reluctant to print. They wouldn’t refund my money, offering me store credit instead. I’m told that Shapeways has a similar practice. 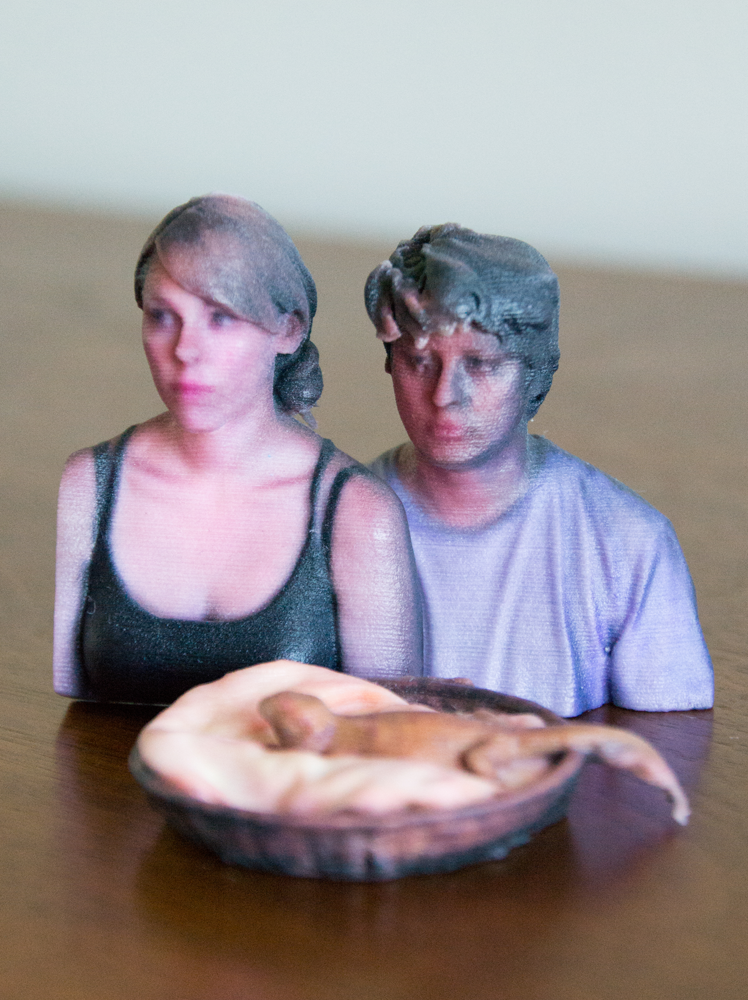 With i.materialise, my items went straight to print, with no problem. Each full-color print from their Zcorp machines, was about two inches tall or, in the case of Shanté on her ceremonial basket, two inches in diameter (about 89,000 mm3 total), with price tags ranging from $24 to $36. Despite great customer service – I spoke with a very friendly rep – and quality prints, the shipping expenses from the Belgian company were quite high at about $18 and the turnaround time was about two weeks. Either way, I truly appreciated my experience with them.

I had also appreciated my experience with the Sense, outside of the spiritual ritual that had occurred with our bearded dragon. It had been incredibly easy to use, seamlessly capturing data when the environment allowed and hands were steady. The editing process was an extremely straightforward process that ensured printability, even if it was difficult to edit the texture map of our models themselves. When it becomes wireless, it will only be easier to use and some small tweaks to improve its ability to capture people would make it a steal, with its low price tag. Needless to say, we loved the prints made using the Sense.

When the prints arrived, Danielle, Shanté, and I were delighted. The resemblances between us and our doppelgangers were uncanny, even if I had been guided to scan Shanté’s entire body in the basket, making her look a bit like a smooth, little newt. My simulacrum also looked a bit dark, as the scanning conditions had been a little bit dark and I couldn’t lighten the texture map. As, I picked them up, however, I realized that my task had not been completed.

Another flash occurred. There was another futuristic device – a tablet? – but I wasn’t scanning a lizard, this time. Instead, these two people were scanning each other. They looked like Danielle and I, but they couldn’t be. They were so odd… What did it mean? Who were these people? Could it have anything to do with the Structure Sensor and iPad Air from Occipital that I’d received in the mail and was meant to review for 3DPI? 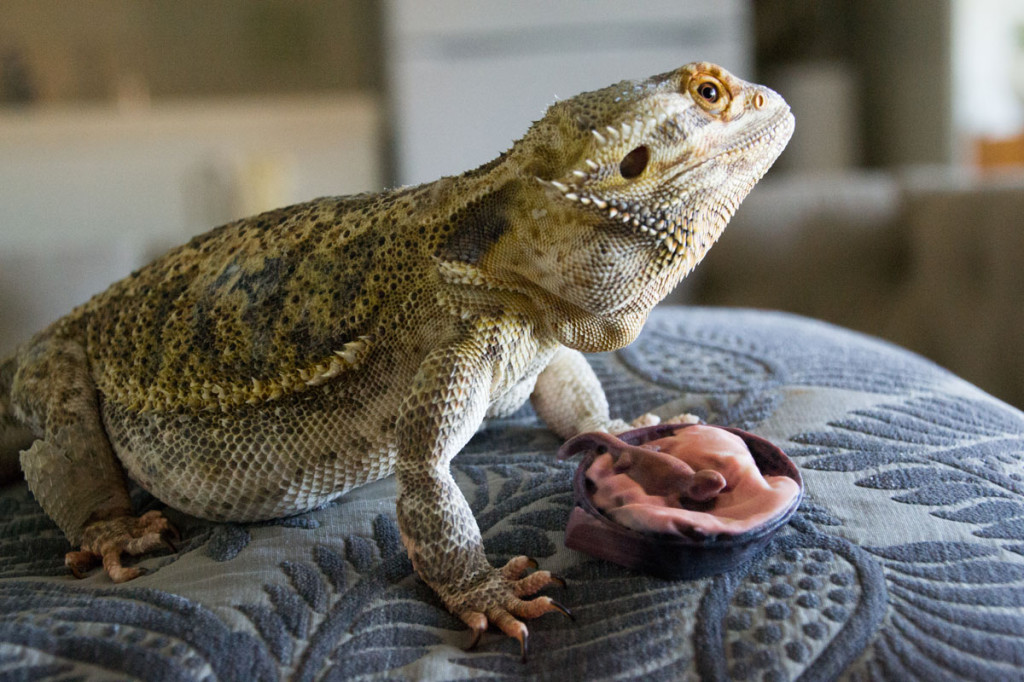