Industry research firm, Gartner, Inc., is celebrating the 20th birthday of their beloved Hype Cycle with their latest report, “Hype Cycle for Emerging Technologies, 2014”. In documenting over 2,000 technologies in 119 different fields and determining at what point the hype behind each tech will fade into true innovation, the analysts at Gartner have determined consumer 3D printing to be more than five years away from full adoption.

The research firm predicts in “Hype Cycle for 3D Printing, 2014” that, though 3D printing is evolving quickly, much of the technology won’t be adopted by the mainstream for another five to ten years, with business and medical  additive manufacturing embraced more readily than consumer 3D printing.  Research vice president for the firm, Pete Basiliere, says, “Consumer 3D printing is around five to 10 years away from mainstream adoption, Today, approximately 40 manufacturers sell the 3D printers most commonly used in businesses, and over 200 startups worldwide are developing and selling consumer-oriented 3D printers, priced from just a few hundred dollars. However, even this price is too high for mainstream consumers at this time, despite broad awareness of the technology and considerable media interest.” 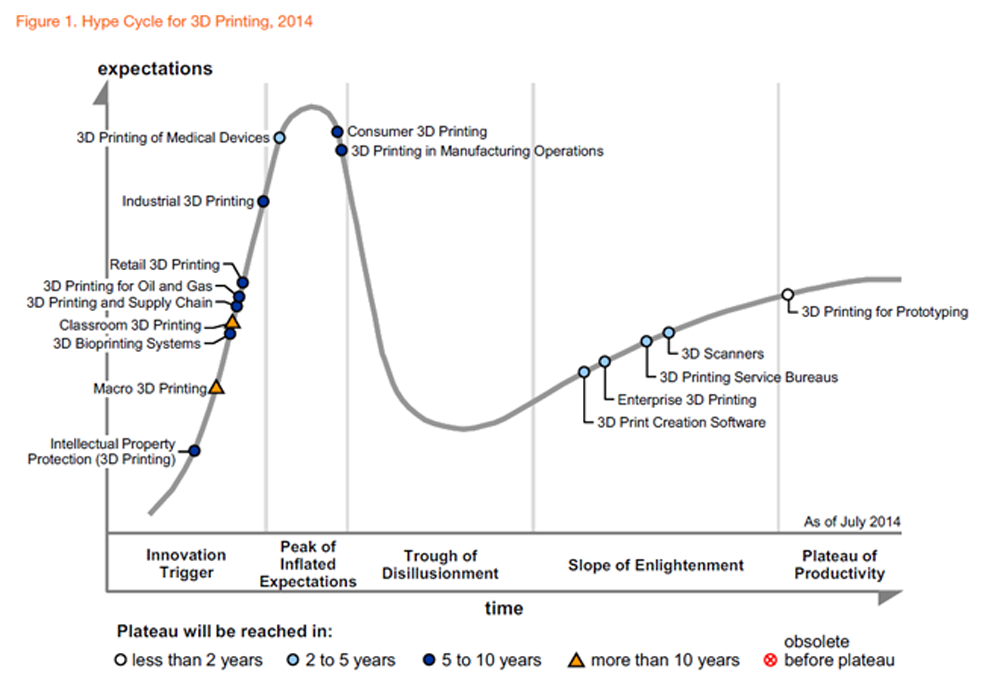 In sorting out the hype from the reality of 3D printing, Gartner has recognized that enterprises will implement the technology more quickly than consumers, as such businesses can take it on with fewer risks and investment in order to reap the rewards of 3D printing.  Basiliere explains that rapid prototyping itself has been around for a significant period of time, offering benefits to business already, “3D prototyping enables organizations to reduce or mitigate the risks associated with the design, form and functionality of products in research and development programs. It may also be used to support new manufacturing processes, and can reduce new product development schedules.”  Firms that are interested in the technology, then, are beginning to experiment with low-cost consumer 3D printers to see how they might benefit from the technology.

And, while the hype has been about consumer use of 3D printing, Gartner analysts suggest that such hype has oversimplified the technology.  In reality, the firm sees 3D printing not as a homogenous, single category, but as seven different technologies, each with different purposes, materials, build sizes, and advantages and disadvantages. For businesses, or consumers, to effectively leverage 3D printing, they have to decide what they will ultimately use it for. Basiliere continues, “Hype around home use obfuscates the reality that 3D printing involves a complex ecosystem of software, hardware and materials whose use is not as simple to use as ‘hitting print’ on a paper printer.  First, determine the material, performance and quality requirements of the finished items first; second, determine the best 3D printing technology; and third, select the right 3D printer.”

The report predicts that enterprises are only two to five years away from completely adopting the technology, thanks to 3D printing service bureaus, 3D scanners, and software tailored to designing objects for 3D printing.  In the near future, Basiliere believes that the technology will have a big impact in the medical field, “At around this time, 3D printing of medical devices will offer exciting, life-altering benefits that will result in global use of 3D printing technology for prosthetics and implants.”

The report also covers applications for 3D printing that will manifest later, rather than sooner.  Additively manufacturing large structures and the widespread use of the technology in the classroom, for instance, are still over ten years away from being adopted by the mainstream.  Though examples of such applications will continue to occur, 3D printing large structures is still a nascent development and widespread implementation of the technology in high schools and universities is expensive.

This report on 3D printing is only one of many that are in the research firm’s 20th anniversary “Hype Cycle for Emerging Technologies, 2014”, which has a central theme of digital business. The larger volume discusses such far-reaching areas as holographic displays, neurobusiness, and human augmentation.  For more information on the 3D printing report itself, take a look at the press release here.  And for the larger volume, visit Gartner here.