I thought we were done naming Apple peripherals iThing’s. But given the new 3D Scanner debuted at CES 2014 – or as I’ve begun calling it “3DS Wins 3D Printing 2014” – it looks like we have another. Snark aside, the new iSense may not re-invent the 3D scanning wheel but it still manages to make it feel fresh.

Developed for 3DS by Occipital, the iSense is an almost absurdly powerful, although still very much first generation, and easy-to-use handheld 3D scanning device — or, using the trending nomenclature, physical photography device. The iSense adds a level of portability and accessibility to 3D scanning that has yet to be matched by even its own predecessor, the Sense 3D Scanner.

Actual spec details for the iSense seem to be scarce, so far, but that’s possibly because it isn’t due to be sent to market until the summer. Most likely, it will be pretty similar to Occipital’s Structure Sensor, previously covered on 3DPI.  The Structure made a huge splash on Kickstarter, with the Occipital team promising the development of a huge app ecosystem. The iSense gives 3D Systems the power of Occipital’s technology to turn any iPad camera into a powerful 3D scanner that brings along all of the portability and Cloud access that being attached to an iPad brings. 3DS’s promotional video hints at many applications of the device, including video gaming, redecorating and of course taking ridiculously detailed 3D photographs. Curiously the promotional video left out the part where it’s used to scan the users own… er… body parts… for science… or something, obviously, but we’re all sure that was a simple oversight.

At $499.99 (about $150 more than the Structure Sensor) the iSense is not a cheap 3D scanner, much less a cheap iPad add-on. But when exactly has 3D printing or iPad owning ever been a frugal person’s hobby anyway? Price aside, it isn’t possible to overstate what bringing 3D scanning, and 3D printing along with it, to iPad users can mean for the future of this industry. We all know the cycle of technology, especially when it has an Apple logo on it. This will result in smaller 3D scanners and cameras. An further miniaturized 3D scanner integrated into many future digital devices isn’t hard to imagine either. By bringing the easy-to-use iSense integrated scanning, editing and printing software ecosystem to the portability of the iPad, 3DS is selling the idea that there is no longer a limit to what or where you can capture and print. 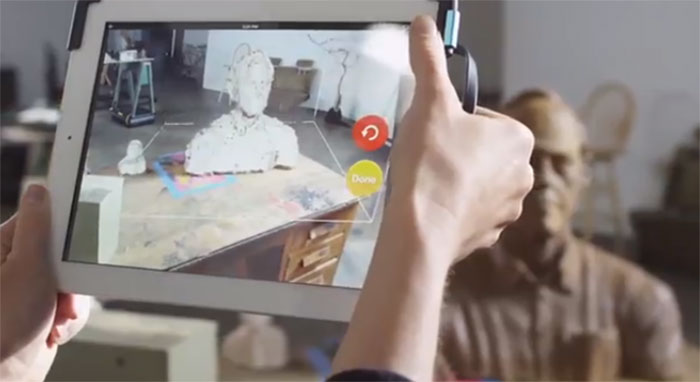 It remains to be seen how quickly the general public warms to the idea of physical photography being part of our lives, being the obvious next step guarantees nothing when consumers are involved. But given the recent surge of 3D scanners soon to be available, the 3D printing industry is most certainly trying its hardest to get us to take that step sooner rather than later.

0 0 0 0
More on this topicForget Wearable and 3D Printed, This Is 3D Fabricated Injectable Electronics
More on this topicAfiniac Joey Hudy is a 16-Year-Old Empowered by the Maker Movement and Employed by Intel