Billionaire business magnate, Elon Musk, aka The Real Life Tony Stark, envisions a not-too-distant present in which 3D modelling and computers are much more intuitive.  By employing a variety of innovative technologies, the entrepreneur has created a design lab that bridges the gap between the real and the virtual so that going from a 3D model to a 3D printed object is as seamless as possible. 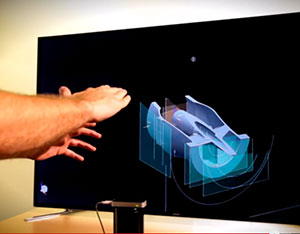 In a video on the SpaceX YouTube channel, Musk describes the various methods he is using to take CAD into the 21st Century, using a SpaceX engine part as an example. First, with the Leap Motion controller, Musk demonstrates how gesture control can give designers a more hands-on approach in working with virtual objects, allowing them to rotate, translate and tweak designs, almost as though it were in the palm of their hands. Then, by displaying the file in 3D, via free-standing glass projection or by viewing it in an Oculus Rift VR Headset, the CAD object is given an added sense of depth. Combined, this could give designers an added sense of tangibility that would make the process that much more real.

Finally, Musk shows us how such parts could be manufactured easily in the real world with 3D printing. By printing a cryogenic valve housing for a SpaceX rocket using the industrial Selective Laser Melting process, the mogul represents a more fluid design and production process not too out of reach for many large manufacturing companies. [Insert joke about the lazy workaholic’s inability to 3D print a Hyper Loop already.]  Really, Musk is reaching for what 3D printing has been hinting at all along, the ability to directly transform mental concepts into tangible reality in the fewest number of steps possible, saying:

I believe we’re on the verge of a major breakthrough in design for manufacturing in being able to take something from the concept of something from your mind  and translate that into a 3D object and really intuitively on the computer and then take that virtual 3D object and to be able to make it real just by printing it. It’s going to revolutionize design for manufacturing in the 21st century.

Check out the video below!

Designing a rocket part w hand gestures & then 3D printing it in a metal superalloy … http://t.co/h3KoyAb0Lt