Nothing is constant but change! All existence is a perpetual flux of ‘being and becoming!’ That is the broad lesson of the evolution of the world. – Ernst Haeckel

Two Denmark-based artists have used 3D printing to create a sculpture that transforms the light of a lamp into the darkness of a twisted forest, a project they call Forms in Nature. The idea is simple, yet awesome.  By producing a gnarly lamp cover for an LED light through what looks to be the Selective Laser Sintering 3D printing process, Thyra Hilden and Pio Diaz were able to cast a series of intricate shadows in 360 degrees along the walls of a room. 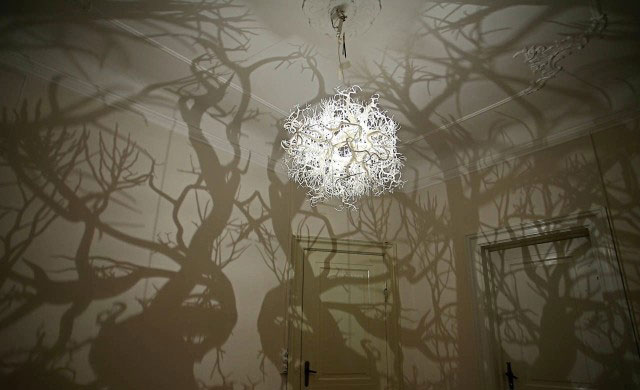 Inspired by the beautifully detailed drawings of the German biologist, Ernst Haeckel, Diaz and Hilden’s lamp cover is made up of many rootlike structures, mirrored around the horizontal central access. The two say that they were attempting to invert the traditional notion of a sculpture. Rather than observing the sculpture from the outside, the sculpture surrounds its observer: 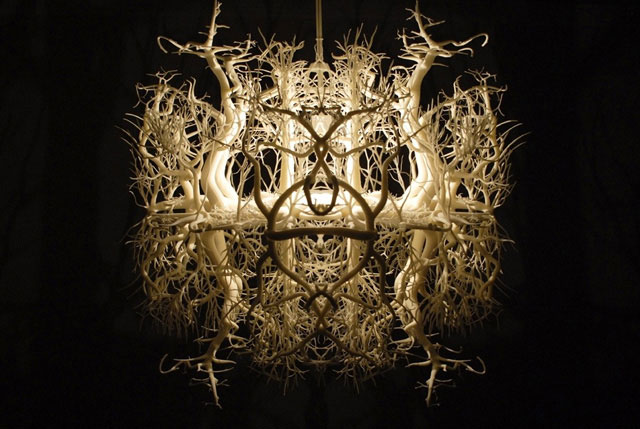 With Forms In Nature we wanted to create much the same feeling one might have when standing in a magnificent forest surrounded by nature. What I like about Forms In Nature is that you are not looking at the art-piece, but rather you are present in it and surrounded by it through the light and the shadows.

The light source behind the piece is hooked up to a dimmer so that, as is true to the philosophy of Haeckel, as the amount of light changes, so does the effect the sculpture has upon the viewer, causing the shadows to shift from an unruly forest to a crackling fire. 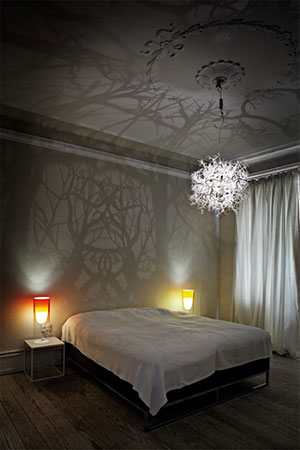 When I saw it, I thought to myself, “Man, I want one of those.”  And it turns out that I’m not the only one.  In the comments section of their site (and anywhere else the work is mentioned on the web), there are a large number of people who would happily purchase one for the right price, so much so that the duo says that it will launch a crowd-funding campaign to produce multiple copies.  Flood their inbox with orders here.

And, now, I’ll leave you with some words of Ernst Haeckel, as true today in modern America as they were in 19th Century Germany:

Yet it is an astonishing fact that the science of the evolution of man does not even yet form part of the scheme of general education. In fact, educated people even in our day are for the most part quite ignorant of the important truths and remarkable phenomena which anthropogeny teaches us.