GE has already made enormous strides in industrial 3D printing by opening a mass additive manufacturing facility to produce the 3D printed fuel nozzles for its advanced LEAP jet engines.  Competing with GE, and reinforcing the global industrial 3D printing market, Rolls-Royce has announced that it will flight-test what it claims to be the largest 3D printed aerospace component to ever power an aircraft.

Incorporated into its Trent XWB-97 engine, the UK aerospace manufacturer and defense contractor has 3D printed a titanium structure that measures 1.5m in diameter and 0.5m-thick. The front bearing housing contains 48 aerofoils and was manufactured using Arcam’s electron beam melting technology, as the result of research performed with University of Sheffield and the UK’s Manufacturing Technology Centre. 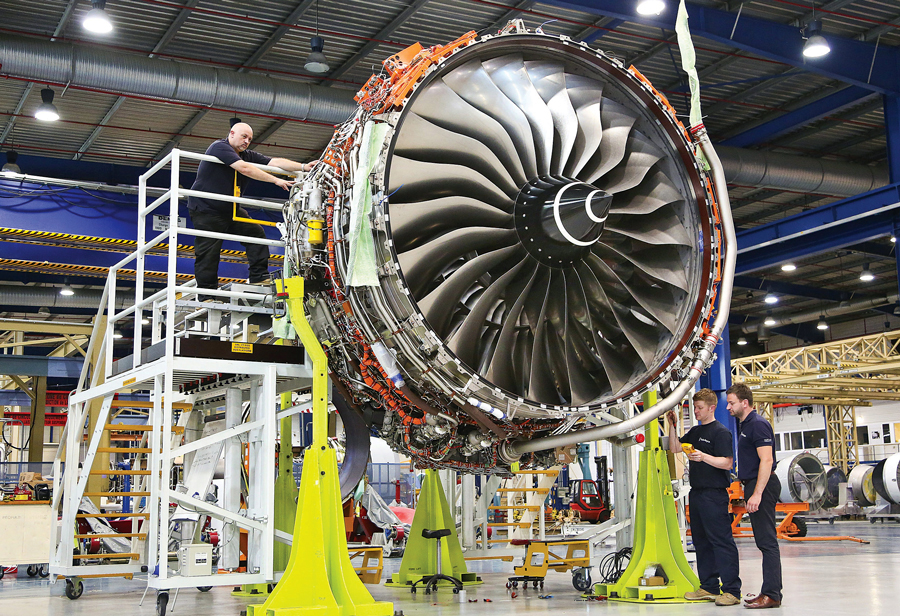 While Rolls-Royce has previously tested multiple XWB-97 engines on the ground, it has yet to be tested in-flight.  Nor has, according to the company, any AM part so large.  At the moment, Rolls-Royce does not plan to incorporate the 3D printed part into the production run of the XWB-97, meant to power the Airbus A350-1000 aircraft, the in-flight test to performed later this year will provide significant information as to the possibilities of mass additive manufacturing such industrial parts in the future.

As 3D printing has already been proven to reduce material waste, fuel emissions, and lead times in other aerospace projects, this component is suggested by Rolls-Royce to cut “like-for-like manufacturing lead time” by 30%.  Still, the corporation does not have a specific time frame in place for using the technology for end-production parts, according to Flightglobal.  Alan Newby, chief engineer for future programmes and technology, elaborates, “We don’t want to put a date on it. We have a lot of work to do on scaleability before making a commitment to production.”  He does add that 3D printing has helped them save time and money in prototyping, “It is ideal for prototyping. Shortening the manufacturing time by almost a third gives us more time to design, which is always a benefit. We are also able to produce designs that we wouldn’t otherwise be able to do.”  And, of its use of 3D printing for repairing parts, Newby says, “We are using this knowledge now to build up to bigger components.”

In addition to its work with Manufacturing Technology Centre, Rolls-Royce is a part of numerous aerospace additive manufacturing programs in the UK and US.  Last November, parts producer Sigma Components received £140,000 from the UK government through the National Aerospace Technology Exploitation Programme, with which it is using to work with Rolls to 3D print lightweight pipe end fittings.  Also last year, the UK government invested £154 million in four 3D printing research projects, including one led by Rolls-Royce “to explore new technologies and drive research keeping the UK competitive on the world stage by creating lighter, greener and more fuel efficient aircraft and reduce carbon dioxide emissions by 75% by 2050 compared to levels in 2000.”

In the US, the aerospace and defense manufacturer is a member of the Commonwealth Center for Advanced Manufacturing, alongside corporations like Airbus and Aerojet Rocketdyne and 3D printing leader EOS.  And, through America Makes, Rolls-Royce is participating with 22 other companies in a $4 million, two-year project to use Optomec’s LENS 3D printing technology to repair aerospace components for the U.S. Air Force.  Altogether, with the progress of this large-scale 3D printed component for the XWB-97 engine, it sounds as though all of that funding is leading to something quite big.