Developed by Czech OEM TRILAB, the DeltiQ 2 is an FDM 3D printer based on the delta configuration of axes. The system is intended as a successor to the firm’s older DeltiQ L, and offers a large format build volume, a single extrusion setup, and extensive material capabilities for professional-grade use.

Established back in 2016, TRILAB has steadily built a name for itself as a leader in FDM 3D printing in Eastern Europe. As evidenced by its specialist portfolio of systems, the company was born with a mission to develop delta 3D printers for the Czech B2B market, and now serves customers in all regions of the world.

One of its latest launches, the DeltiQ 2, is aimed at prosumers, engineering and design firms, research institutions, and anyone else seeking a reliable and robust 3D printer for functional prototyping and tooling applications.

How delta 3D printing is supposed to be done

Unlike most of the printers we review at 3D Printing Industry, the DeltiQ 2 is based on the delta coordinate system, whereby the printhead moves in all three axes (XYZ) while the print bed stays completely stationary. As well as looking pretty damn cool, delta printers are actually known for their faster travel speeds, since less overall weight is being shifted around. Since the weight of the single printhead is divided between three motors, we can expect faster print speeds while preserving precision.

TRILAB has based its entire business on delta 3D printing and it shows – the DeltiQ 2 features a simple yet sturdy aluminum frame with an undeniably premium feel to it. Straight out the box, the printer also comes with everything you need to set up and begin prototyping. This includes a 0.75kg spool of PLA material, a Redmi 9A phone (which is used as the printer’s touchscreen), and a set of maintenance tools to keep the system in tip-top shape.

The machine offers a hearty build volume of Ø250 x 300mm, providing users with ample workspace to play around with. The 5mm aluminum build plate can be heated to 105°C to prevent part warping, and the system even comes with a swappable magnetic PrintPad sheet topped with a smooth PEI surface, which we found to be excellent for part adhesion. 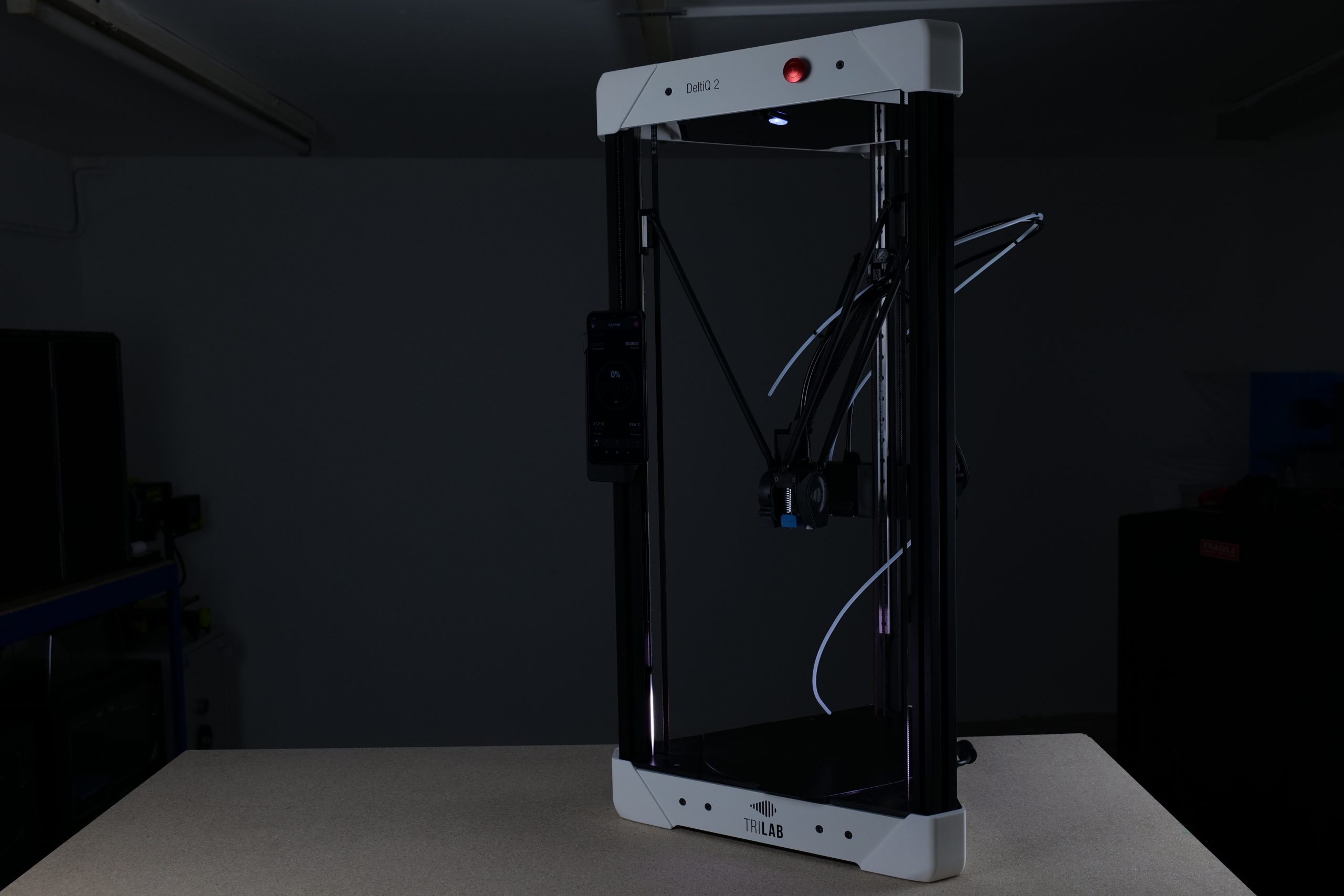 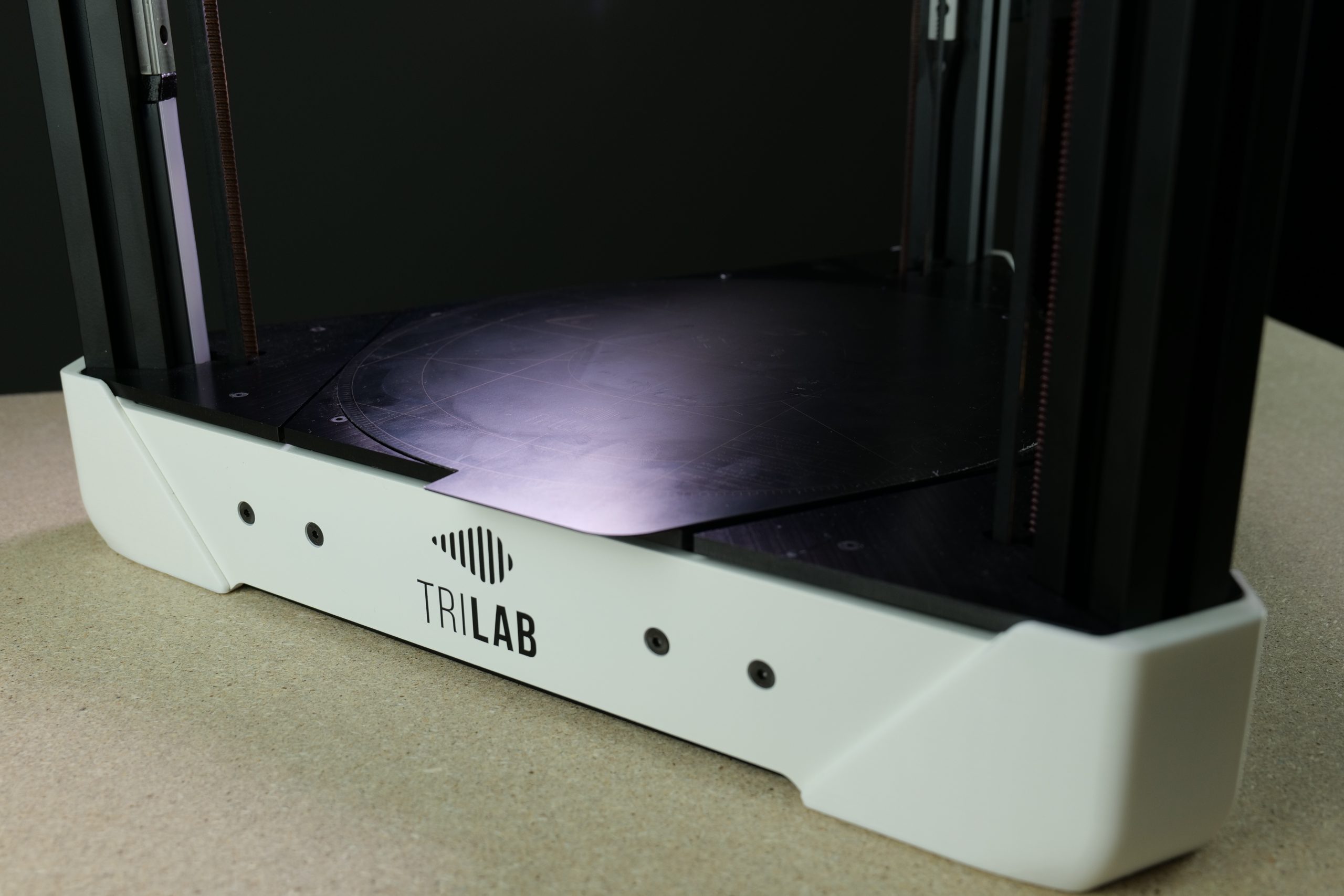 Your choice of filaments

TRILAB’s DeltiQ 2 is a single extrusion system, offering an E3D Titan Bowden extruder with a default 0.4mm E3D V6 All-Metal HotEnd, although the nozzle is easily substitutable. Sporting a maximum nozzle temperature of 300°C, the machine truly does have an impressive set of filament compatibilities for those higher-performance applications. This includes PETG, PC, PP, and even fiber-reinforced composites such as PETG-CF, PA-CF, and PA-GF.

The system explicitly features a single printhead due to TRILAB’s focus on quality and precision, but those seeking multi-material, multi-color, or soluble support parts can also make use of the company’s QuadPrint add-on. With this extension, the DeltiQ 2 comes equipped with the well-known Mosaic Palette 2S/2SP line of multi-filament devices, turning that single printhead into a multi-functional tool. All you need to do is feed in up to four desired filaments and the Palette 2 will automatically switch between them based on the gcode of the build.

If you’d like to print with flexible filaments such as TPU, however, you’ll need to opt for the FlexPrint 2 add-on, an optional remote direct drive extruder that can be installed for an additional $310.80.

But wait, how can an extruder be both direct drive and remote? This is the first time we’ve ever seen a system like this on a 3D printer, whereby the FlexPrint 2 motor is actually housed on the outside of the machine with a long Cardan shaft driving the gears situated in the print head. We have to give TRILAB props for this one, as it allows the system to combine the flexible material capabilities of direct drive extruders with the lightweight and speed advantages of Bowden extruders. Genius. 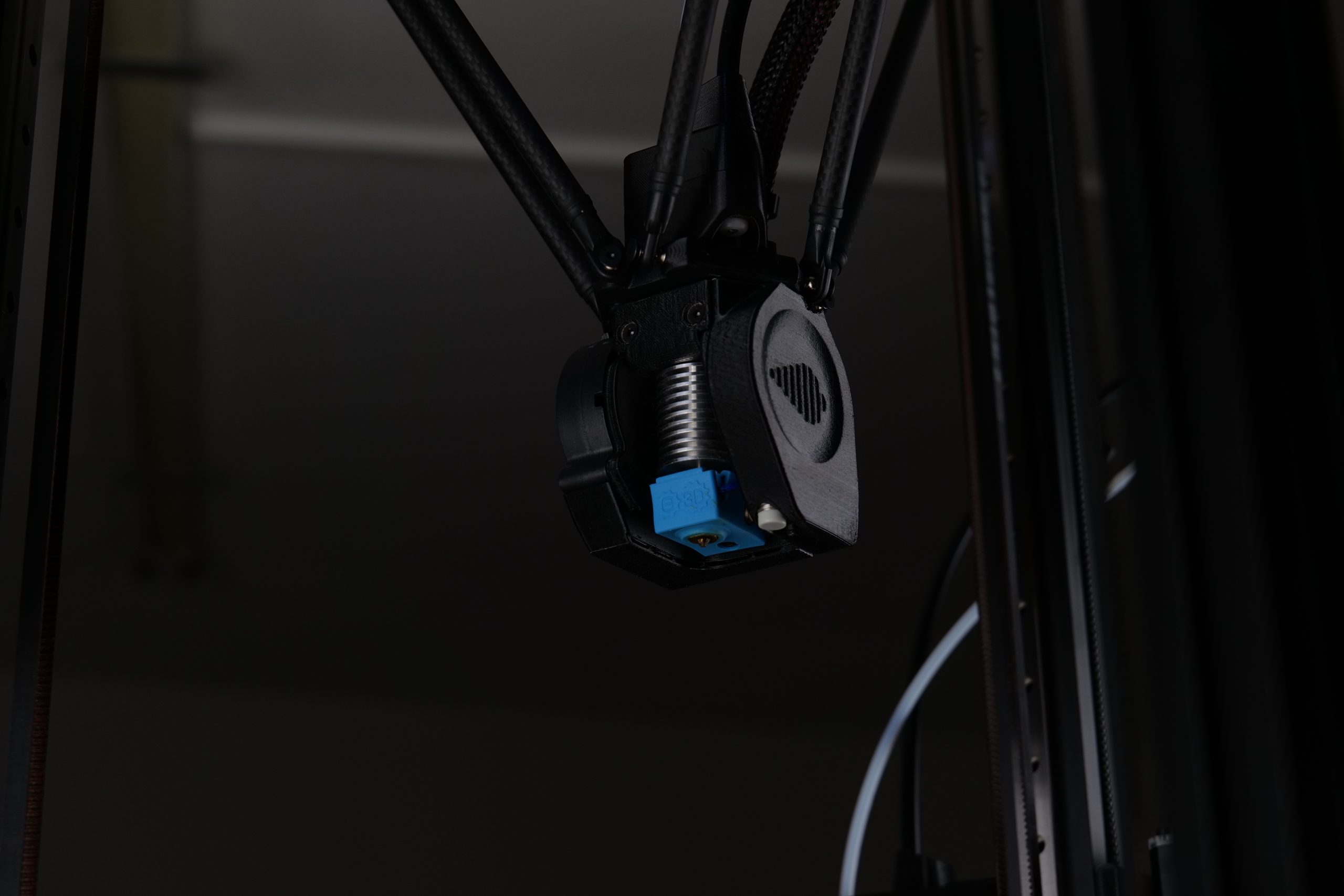 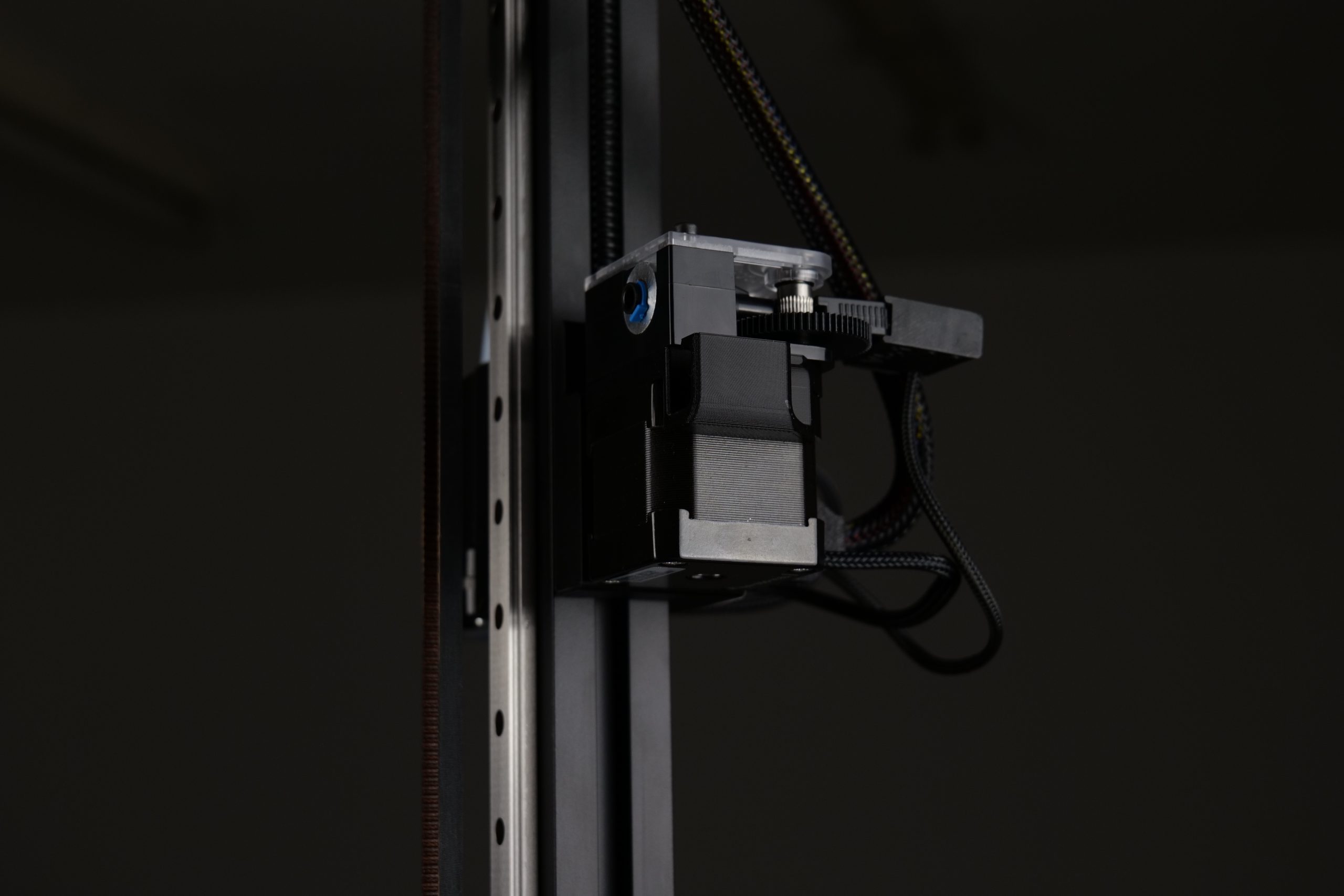 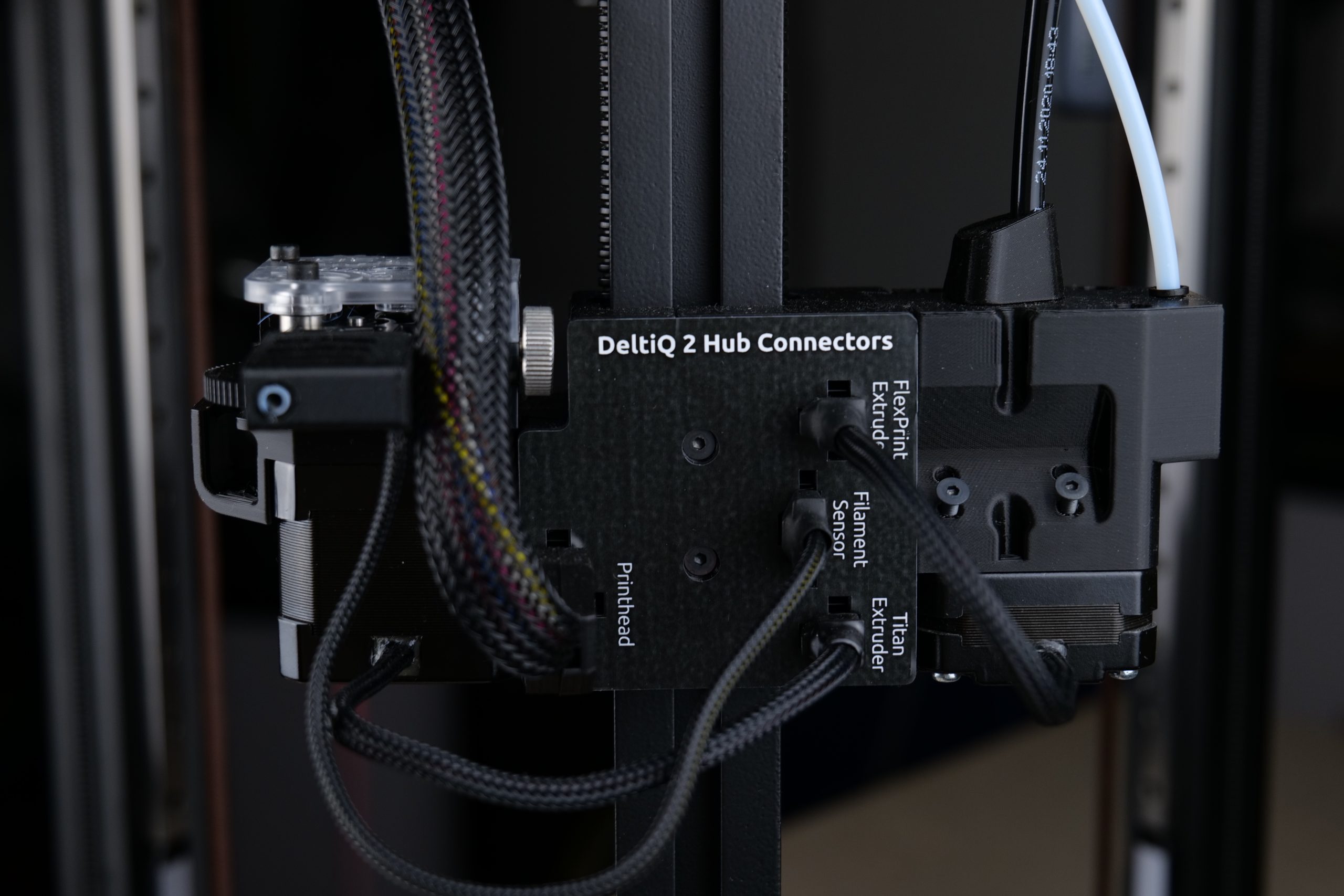 Software is just as important as hardware

One area where the DeltiQ 2 really shines is in its plethora of control options. The DeltaControl Display (aka Redmi 9A phone) included in the box can be tacked onto the front of the printer and used as a touchscreen interface, with the DeltaControl app coming pre-loaded. Users can also just download the DeltaControl app onto their own Android devices. Finally, for those that would prefer a web interface, the company’s WebControl platform can be accessed on a PC, Mac, or responsively on any mobile device, so take your pick.

Looking at the DeltaControl app, in particular, the UI is about as clean and intuitive as it gets. The platform allows users to calibrate the bed, load and unload filaments, and begin print jobs, all in one very well-designed package. Seeing as the app is handled by smartphone hardware, it’s also noticeably smoother than the control systems of most other printers. We can tell just how much effort has been put into refining this area of the system.

When it comes to bed leveling, the DeltiQ 2 uses an assisted hundred-point-leveling system enabled by an inductive sensor. Since there aren’t any physical knobs or screws to turn here, it’s pretty hard to goof it up, making it a piece of cake to use for both beginners and 3D printing veterans. The printer also probes the bed before commencing each print job, and we never once had to manually adjust the Z-offset in the time we spent testing it. It works and it works well.

Interestingly, TRILAB doesn’t provide its own slicing software for use with the DeltiQ 2, but it does provide several slicing profiles that can be downloaded. As such, users are free to pick their own slicer from a selection of readily available third-party offerings, including Slic3r, KISSlicer, Simplify3D, and the company-preferred PrusaSlicer. For this review, we used Slic3r. 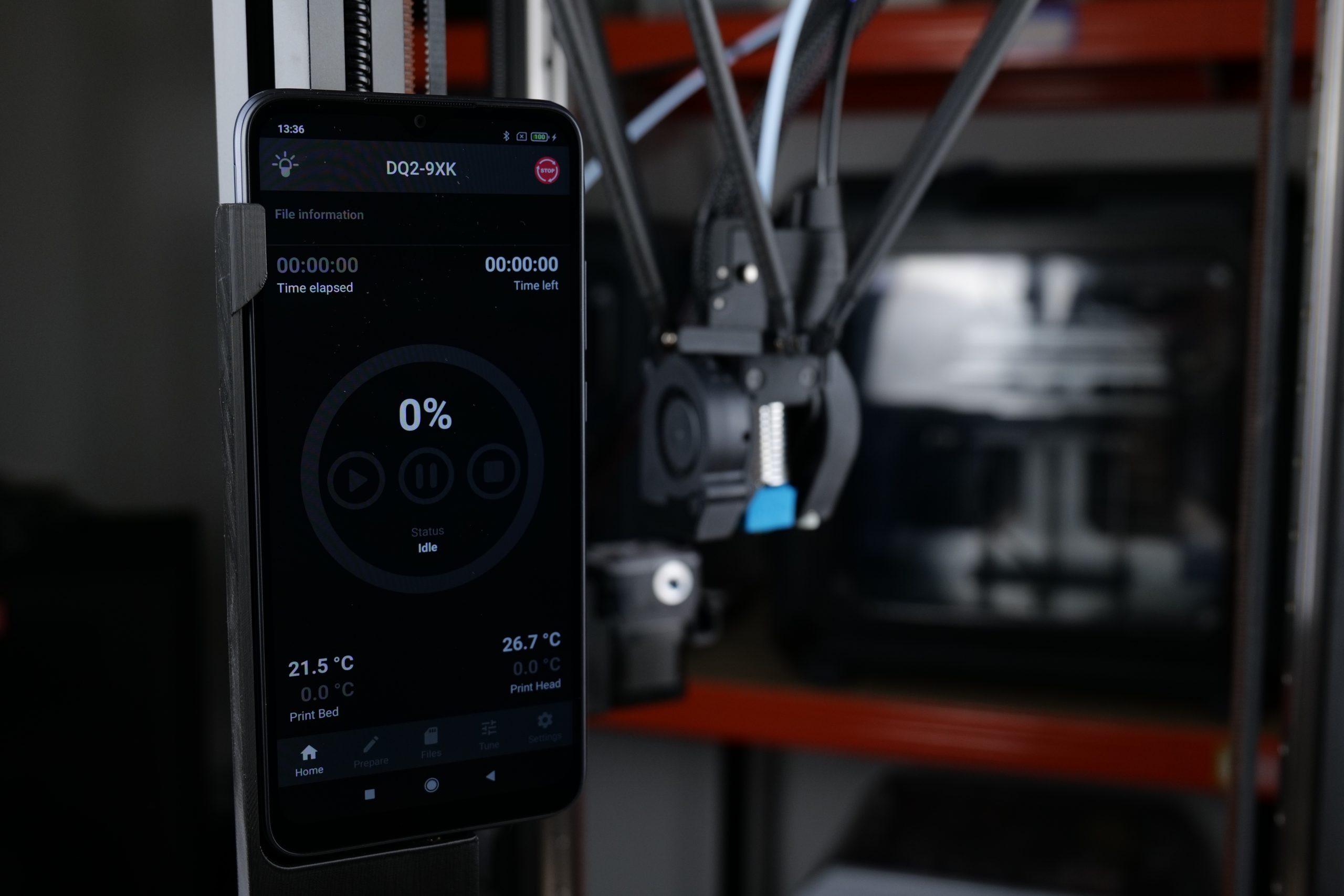 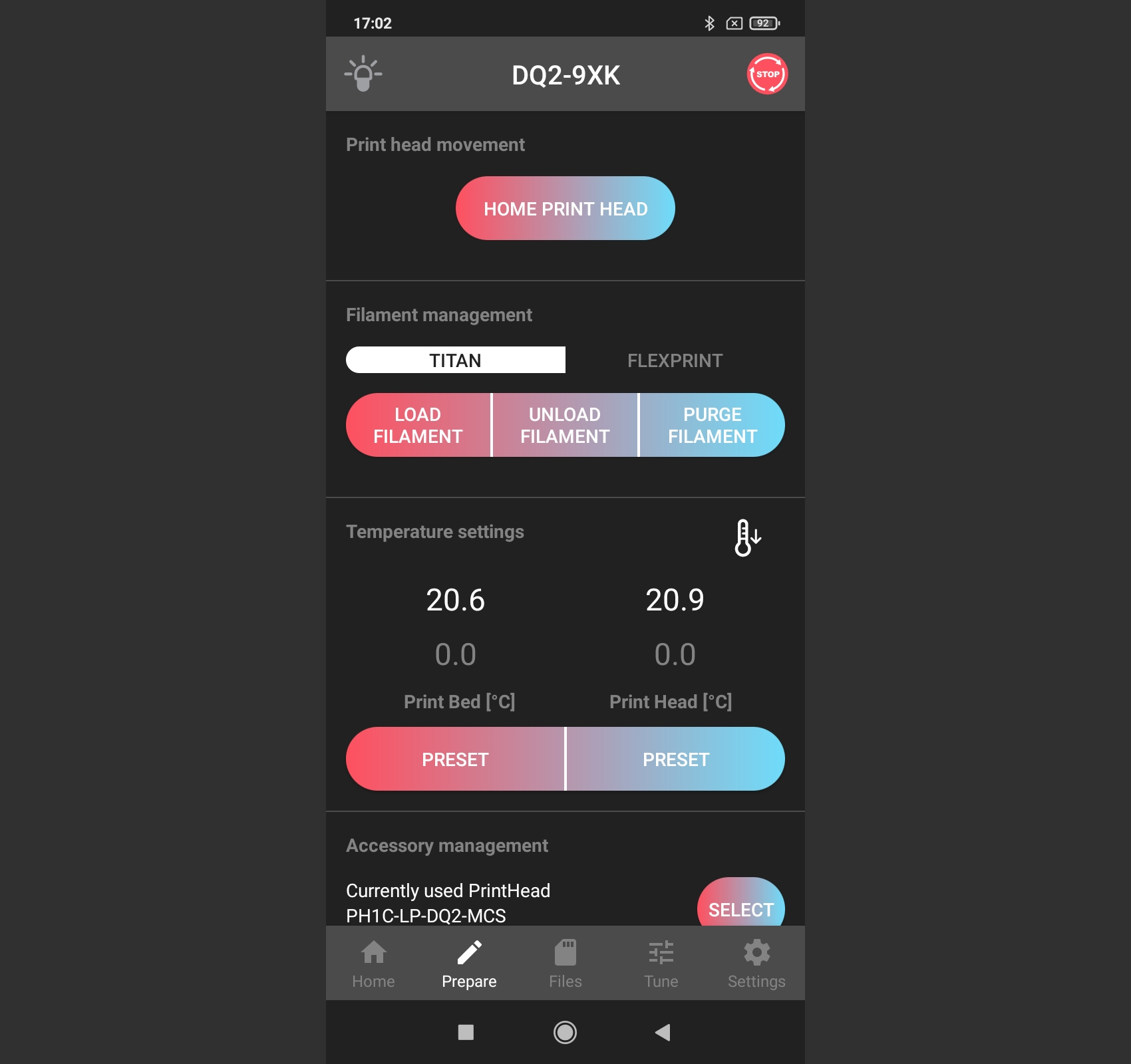 It’s time for the benchmarking portion of the review, where we evaluate the printing performance of the DeltiQ 2. We start off with 3D Printing Industry’s own benchmarking model, which consolidates many of our smaller print tests into one comprehensive part. We usually print this test in PLA to compare results between printers, but we also often try a PETG or ABS variant to see how the machine handles higher temperature filaments.

Printed in PETG, this model really pushed the limits of the printer, but the DeltiQ delivered with grace. We assign each of the individual sections a weighted score based on factors such as dimensional precision, surface quality, and structural integrity. The DeltiQ 2 earned an overall 3D Printing Industry score of 67/100 (a good professional-grade 3D printer is a 60+). 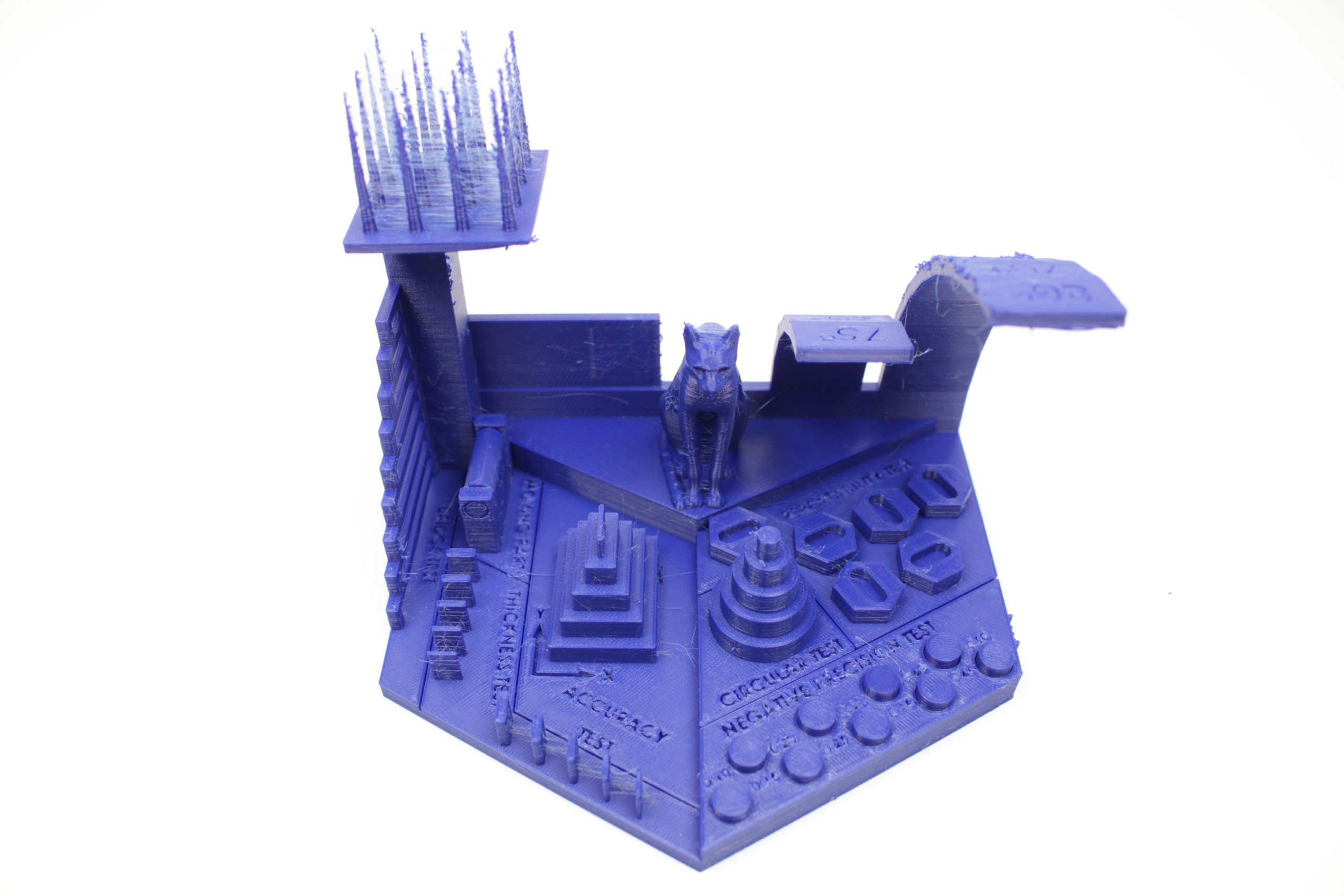 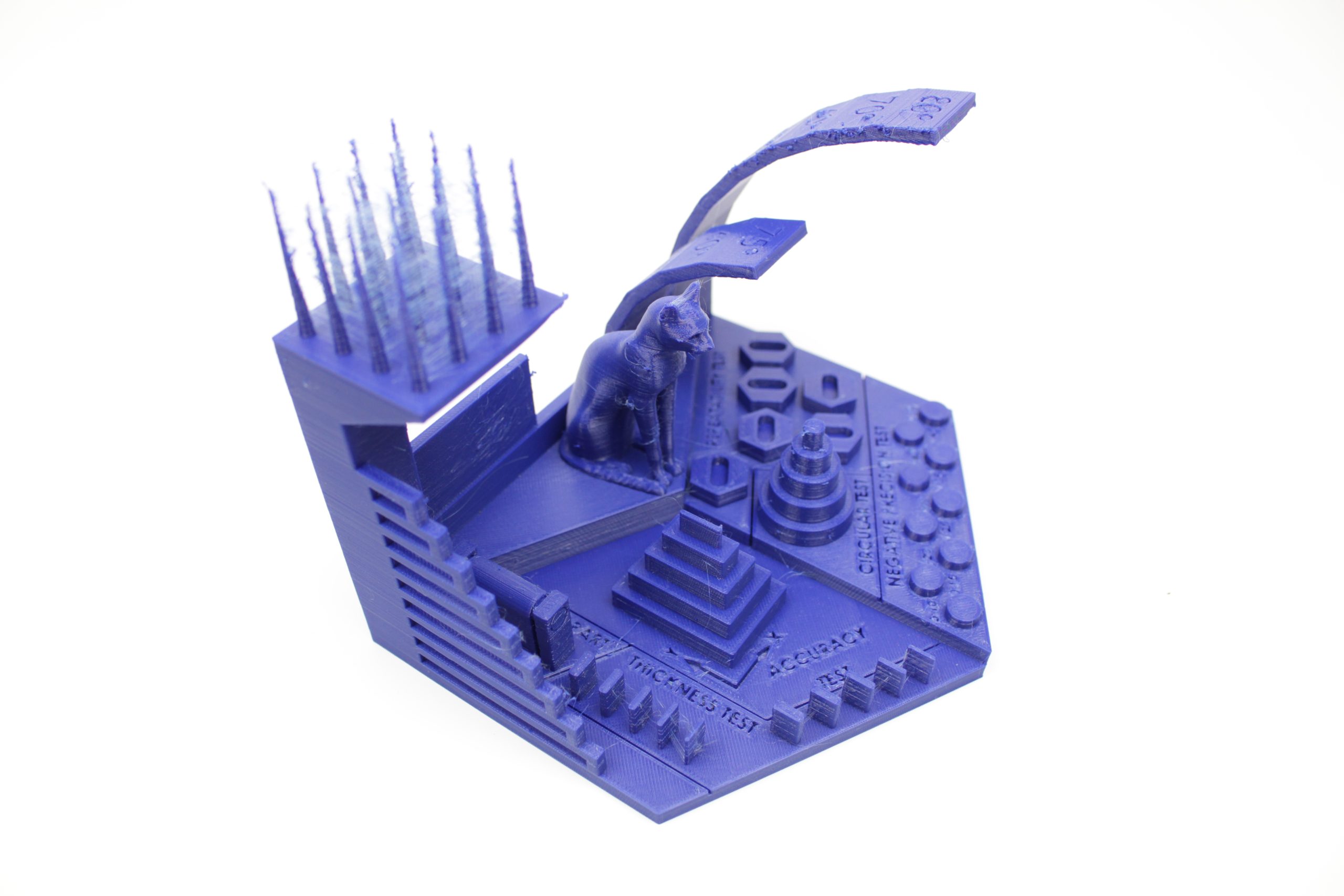 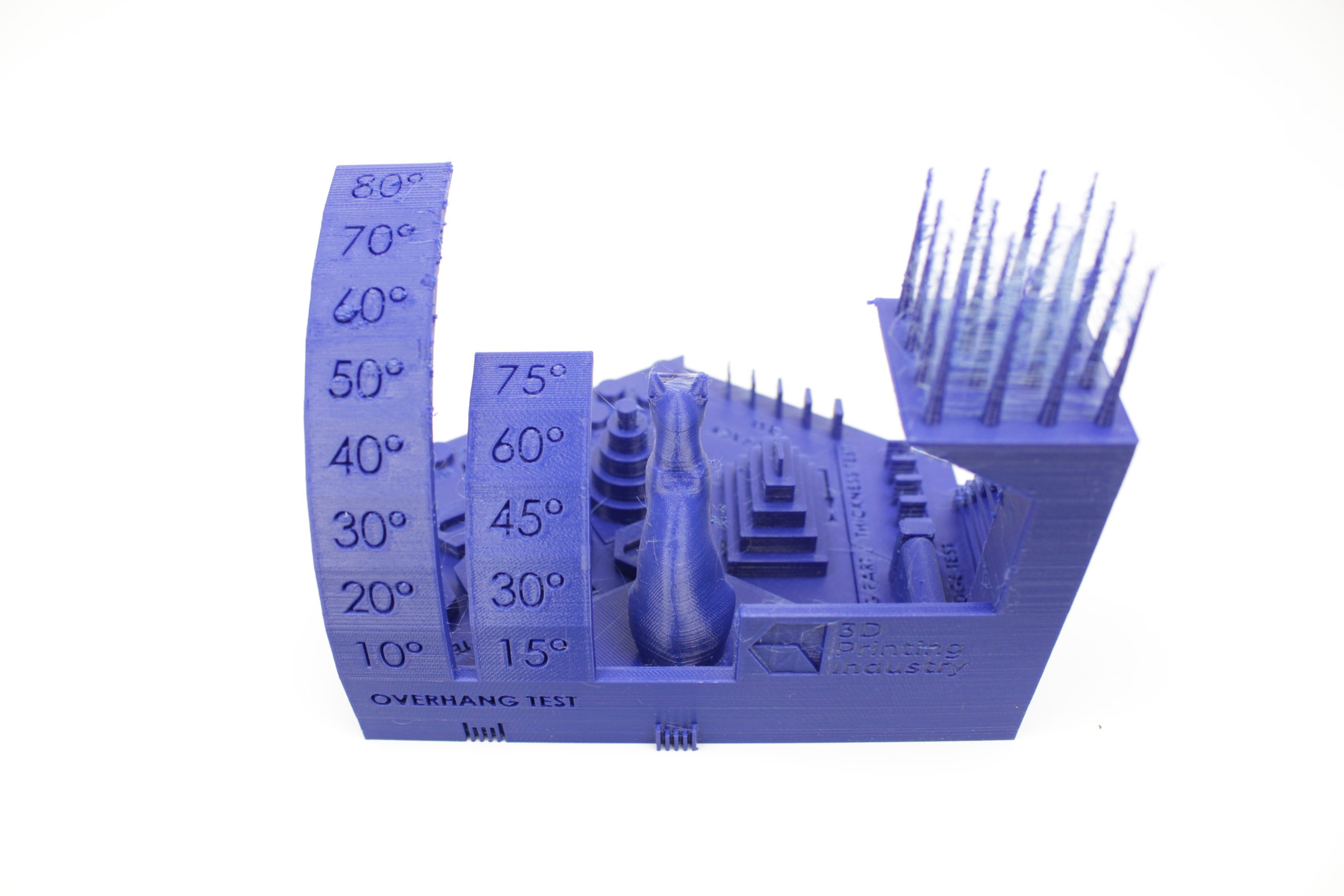 The overhang portion of the test, which is designed to determine the angles at which a system can print without supports, was fabricated successfully up to 60° without a hitch. Considering the average sits at around 55° for easier materials such as PLA, 60° on a PETG print is an excellent result.

Similarly, the bridging portion of the test is intended to determine a system’s horizontal printing capabilities. With PETG, the DeltiQ 2 managed to reach the 30mm bridge length successfully. This is by no means a perfect result, but a respectable one, especially considering the open-form nature of the machine.

Finally, we look at the retraction test, which gives us an idea of the 3D printer’s extruder capabilities. With high-temperature materials like PETG, it’s not uncommon for even the best printers to struggle with this test, but the E3D components of the DeltiQ really shine here. Although there is some significant stringing between the spikes, the structures themselves were printed successfully without any artifacts.

We also wanted to see how the DeltiQ 2 would handle circular structures, so we 3D printed a circular trajectory test. By studying the normal distribution of the concentric circles’ diameters, we can say that the printer offers sufficient repeatability when the average offset between the desired and actual measurements is under 0.1mm and the standard deviation is under 0.05mm. Our measurement devices are accurate to ±0.015mm.

It’s not a stretch to say the results of this repeatability test were some of the best we’ve ever seen for an FDM 3D printer. The average offset came in at just 0.034mm with a standard deviation of only 0.0336mm, which is only possible because TRILAB has put so much effort into correctly calibrating each of its driving motors. For reference, most high-performance FDM systems will claim dimensional precisions of up to 0.1mm, which qualifies them for prototyping and end-use production for industrial applications.

As is tradition with our testing procedure, we also had the DeltiQ print an artistic model to see how the system would handle complex geometries and fine feature details. This time around, we opted for the Statue of Liberty in PLA.

Our scaled-down Lady Liberty certainly impressed. The model had no defects whatsoever, with smooth curves, a high surface quality, and virtually invisible layer lines. All of the grooves and edges are free-flowing and the print as a whole is excellent.

Next up, we decided to put the DeltiQ’s composite filament capabilities to the test, while also testing the printer’s ability to produce functional mechanical models. We went for a planetary gear system made of PA-CF, carbon fiber-reinforced polyamide. Dynamic prints like this one give us an indication as to just how tight the tolerances of the 3D printer are, as the ease of assembly and overall fluidity of the system can be judged very easily. 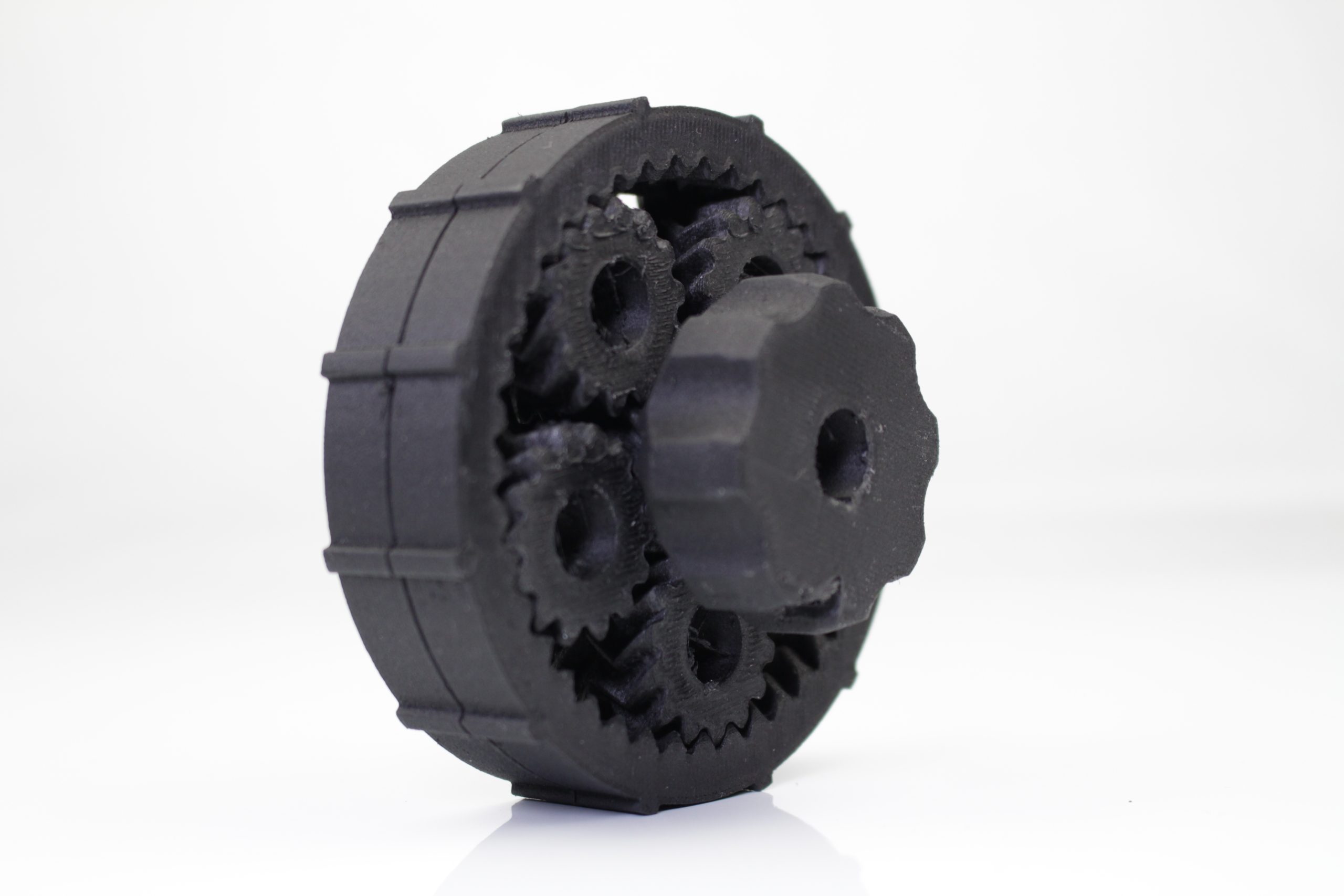 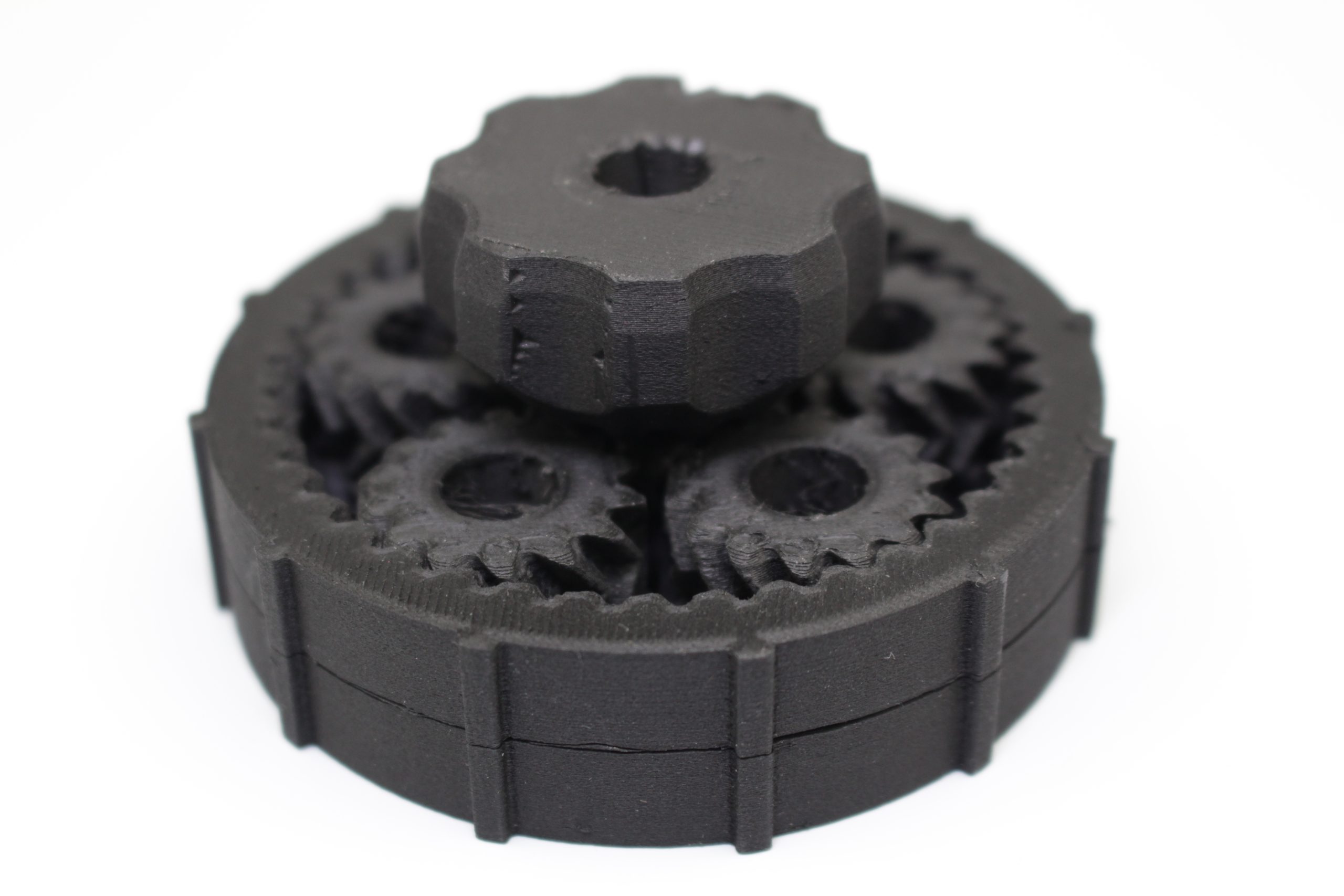 Again, the DeltiQ 2 plowed through this test without a hiccup. Our planetary gear system came out beautifully, flaunting clean surfaces and a solid build. Each of the gears fits into the assembly as it’s supposed to and the whole thing works perfectly. We have here a great mechanical print that could certainly be used as a functional prototype – a big green tick for the composites.

Finally, we also had to see how the FlexPrint 2 extruder would fare with a few flexible filament prints. The orange vase and phone case are made of TPU 95A while the white BMX handlebar grips are made of TPU 85A. 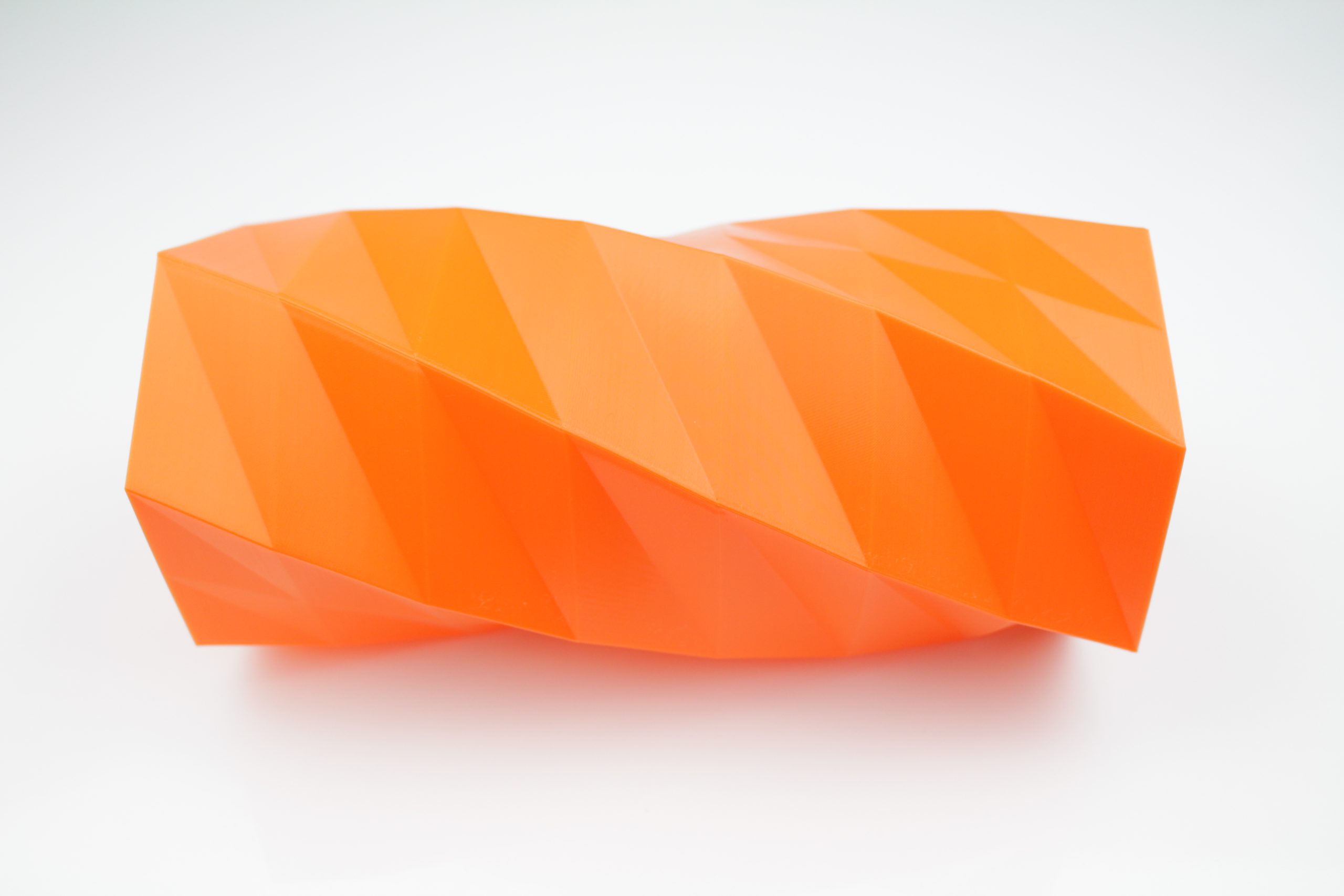 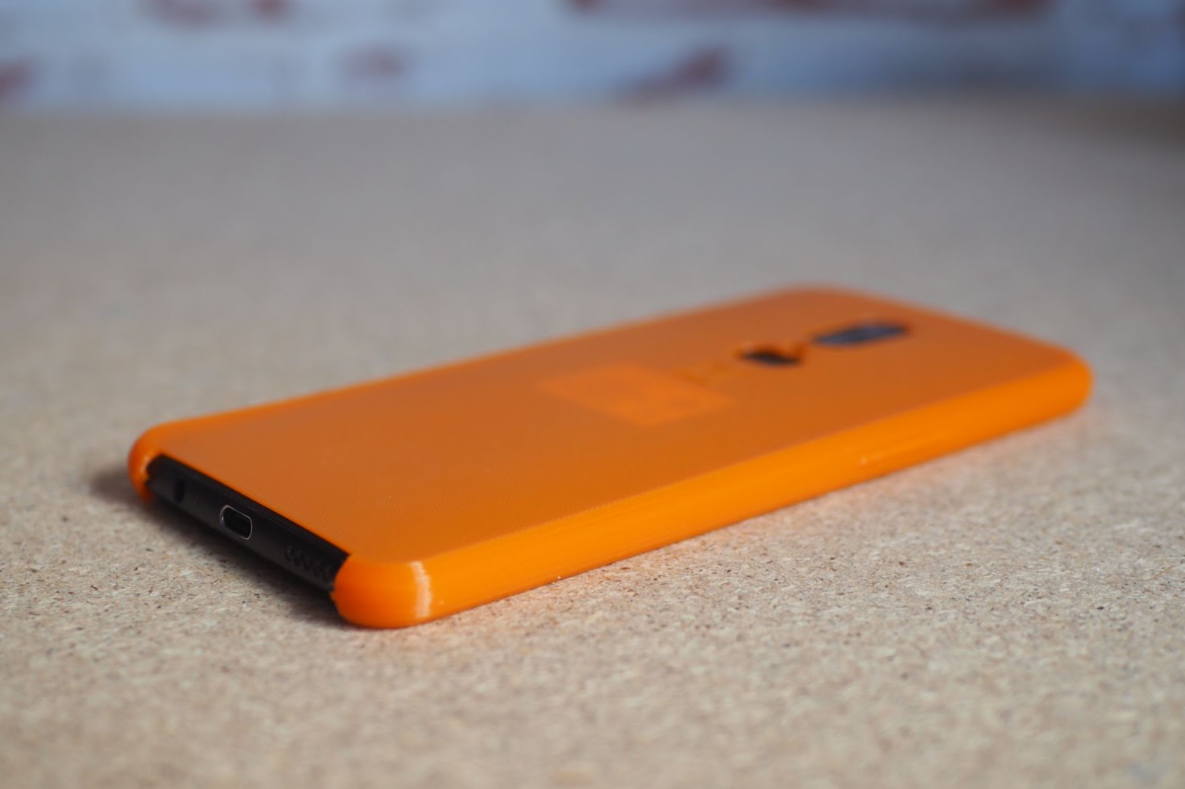 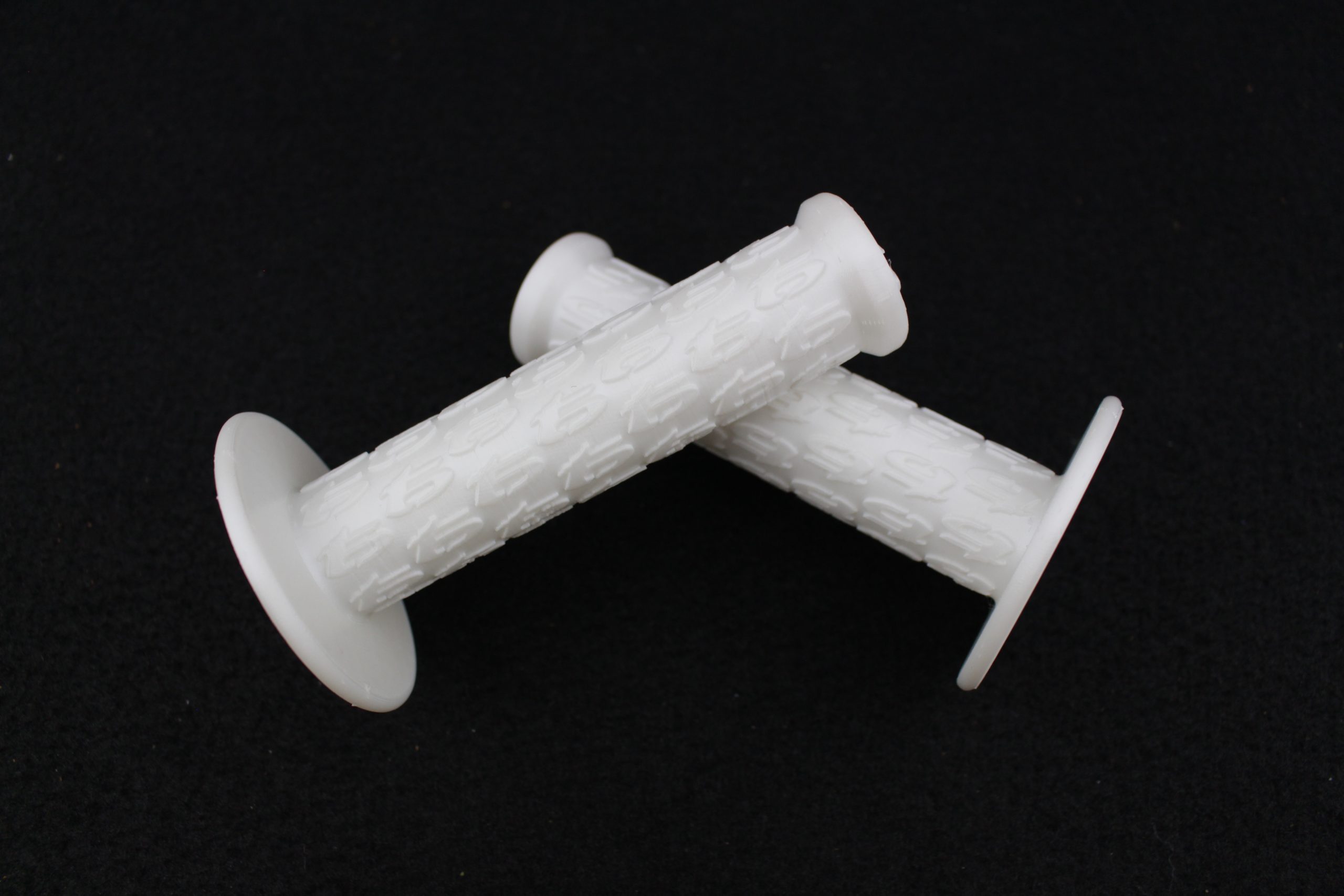 There’s not much to say here other than the fact that the FlexPrint 2 add-on is worth its weight in gold. Flexible filaments tend to be extremely difficult to print but the DeltiQ 2 fabricated all three builds perfectly. Our vase bounces back to its original shape after significant deformation, the phone case fits the OnePlus 6 smartphone like a glove, and the BMX handlebars look like they belong at the Olympics. If you’re in the market for flexible polymer parts, you can’t go wrong with the DeltiQ 2’s FlexPrint extruder.

Ultimately, TRILAB is one of the 3D printing industry’s most highly regarded delta system manufacturers and it’s not hard to see why. The DeltiQ 2 is a fantastic 3D printer, offering everything you’d want from a professional-grade prototyping engine. The large-format build volume coupled with the superb print quality makes for a machine worthy of the price tag.

One of the DeltiQ’s greatest strengths is certainly its extensive filament compatibility. Whether you’re seeking high-strength carbon fiber composites, flexible TPU, or even chemical-contacting polypropylene parts, the DeltiQ 2 has you covered. If you’re looking for multi-material 3D printing, don’t let the single printhead setup discourage you either, as the QuadPrint option is always there to facilitate this.

There’s also something to be said about the DeltaControl app, which makes remote build control an absolute breeze. We wish more manufacturers would go down this smartphone app route, so here’s to hoping TRILAB sets an example.

We had a blast putting the DeltiQ 2 through the wringer, and hope to see the company’s future 3D printers maintain this level of quality. 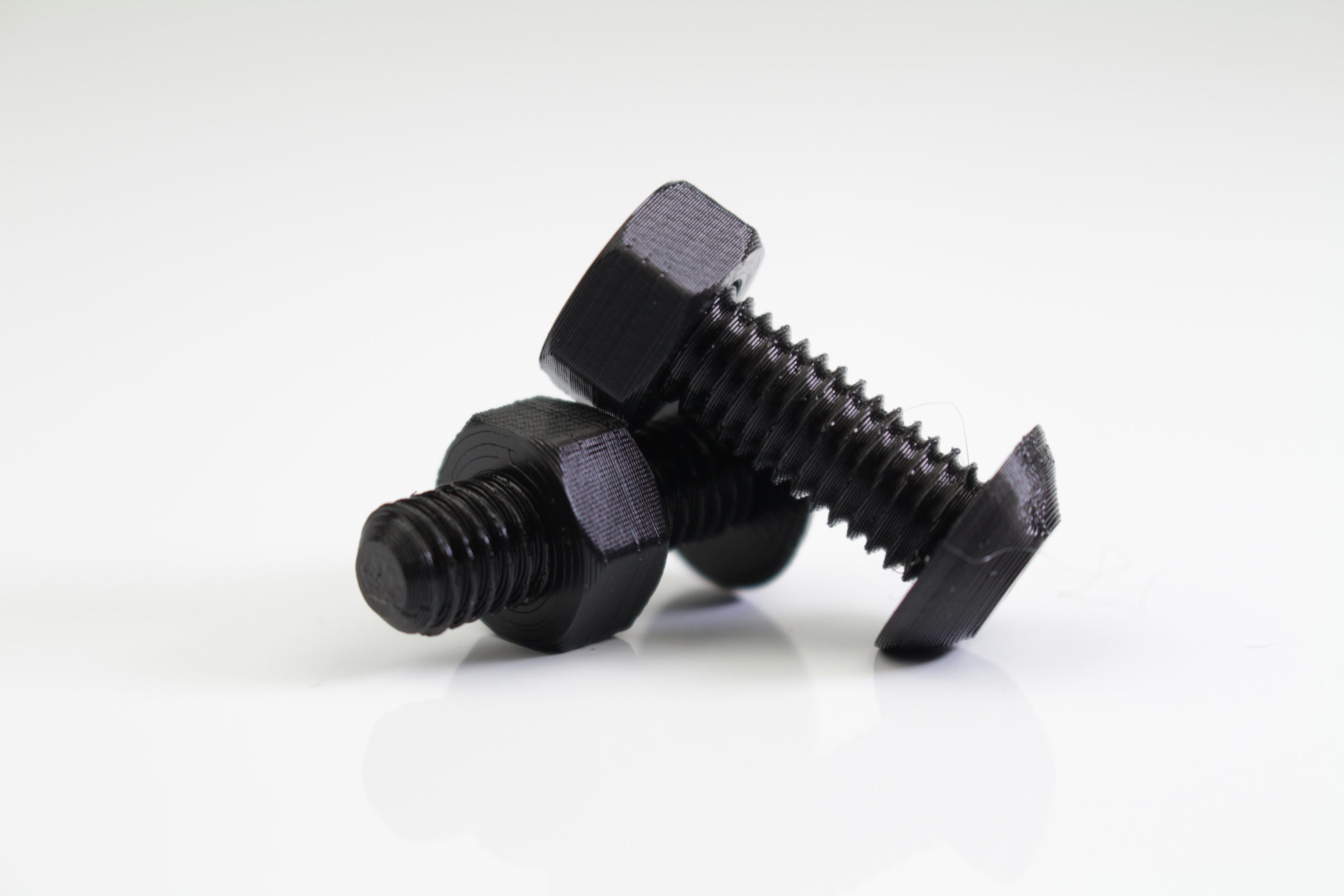 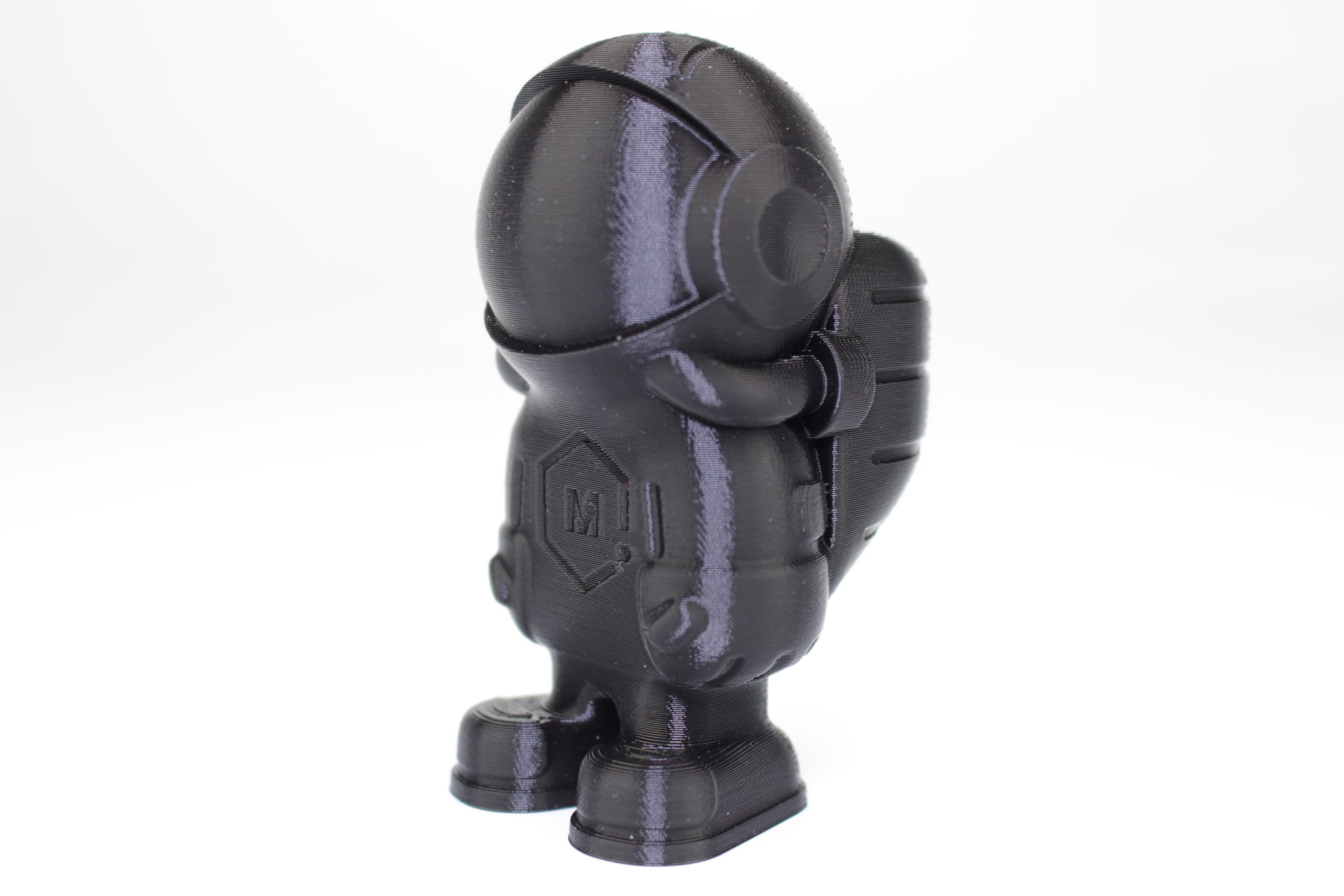 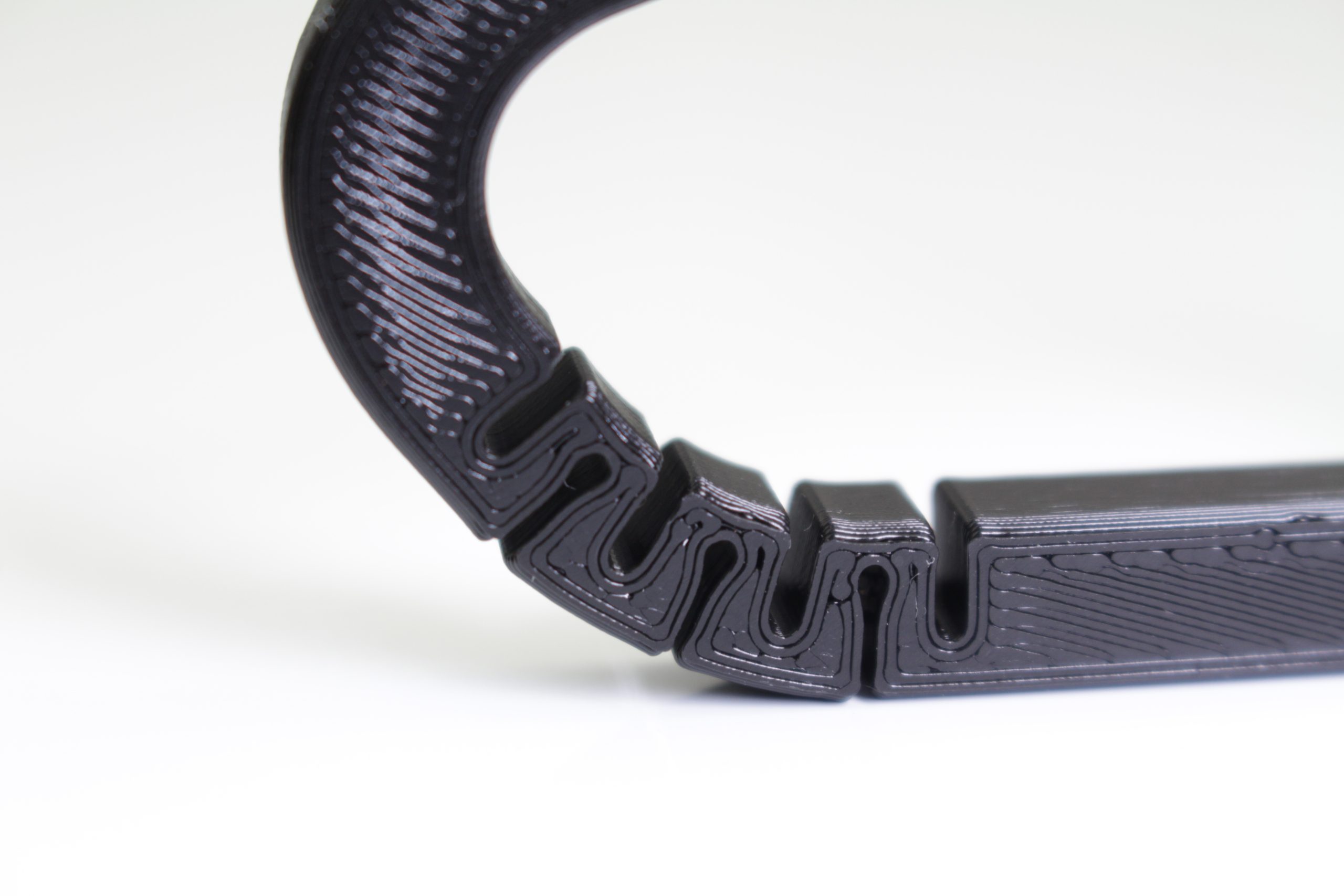 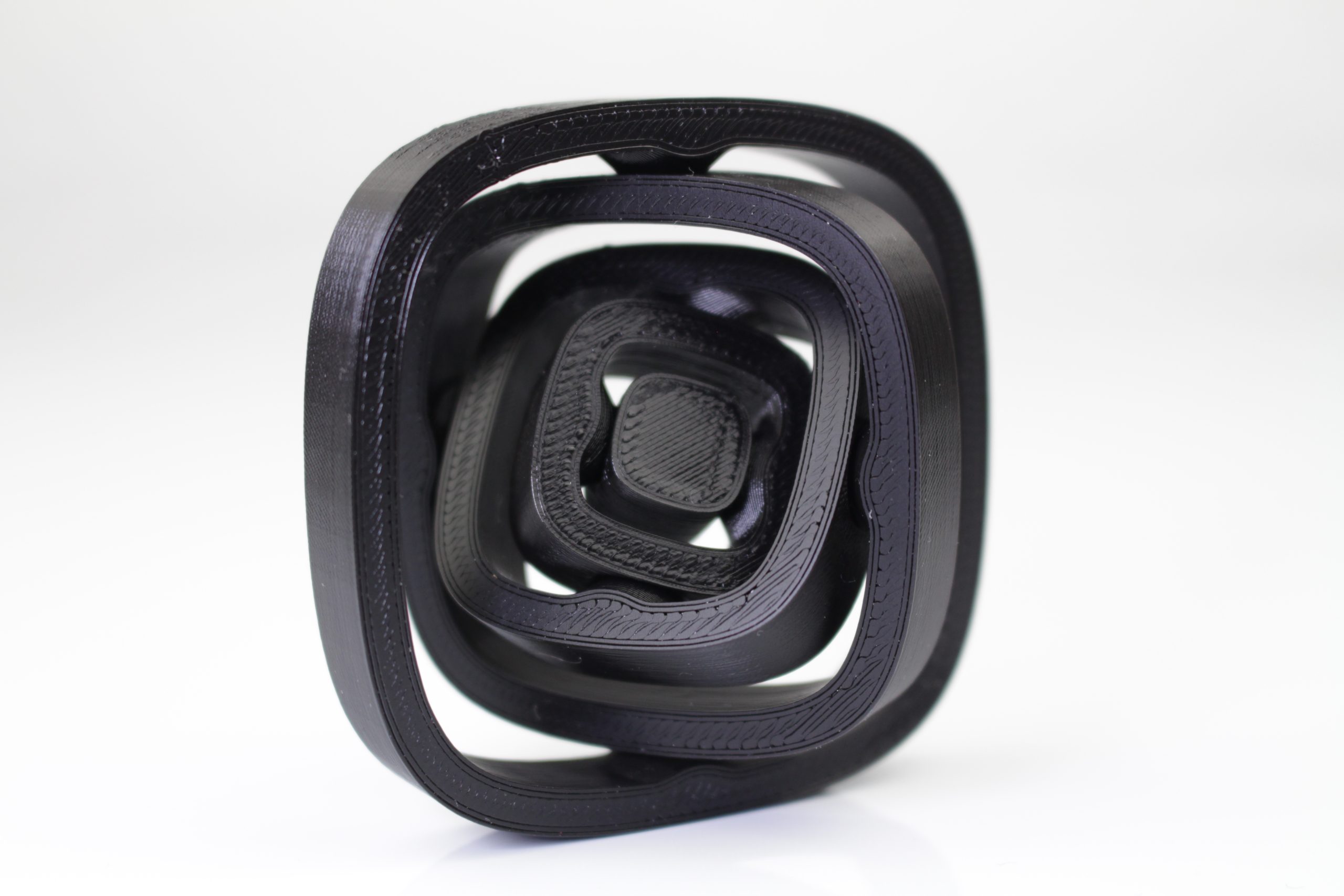