Heading down to Nottingham for the conference on additive manufacturing and 3D printing is always a pleasure — knowing what to expect to a certain degree having attended for a fair few years now, always with a sense of anticipation, because I also know that there will be something to surprise me.

And so it transpired.

This conference is one that always seamlessly blends the usual suspects with an influx of well-educated newbies to positive effect. It was great to catch up with the Nottingham University 3D Printing Research Group since their transition from Loughborough University just 12 months ago. What the team has achieved in that time is phenomenal — lead by Professor Richard Hague — and the new lab, which officially opened on 12th March this year, was open for tours during the 2-day conference. I went and was delighted to be shown around the facility by Professor Phill Dickens who moved there to join his cohorts last month. 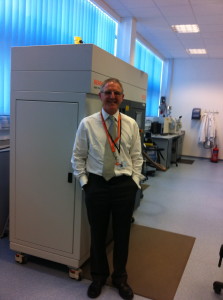 The lab is a new and dedicated AM/3DP facility that has taken many man-hours to set up with all the equipment central to the leading research the group is undertaking. The equipment in the lab is a combination of “conventional” and completely new, experimental kit. This is actually a theme that emerged during the event, as the focus on the lab and a couple of the R&D presentations gave rise to the mention of “conventional” and/or “traditional” additive manufacturing techniques as a benchmark for interesting new technology/processes under development that challenge the current AM paradigm.

In terms of language there were a couple of other things of note — the additive manufacturing and 3D printing monikers were used interchangeably and, more importantly, comfortably. At last. The other thing that took me a little more by surprise was a shift in language around the materials, which is now old hat, apparently, it’s now all about “inks.” This is the result of a heavy emphasis on ink-jetting processes — believed by many at the conference to be the future proof 3D printing technology base. I have personally been convinced of this for a while – ever since I interviewed David Reis, pre-merger, last year.

The R&D into inkjet processes is much more widespread than even I thought – well beyond the Objet (Stratasys) and ProJet (3D Systems) processes. The Nottingham Research Group are building systems from the ground up, a couple of which were on show during the lab tour, plus the obligatory nod to a secret area that we were not allowed to see. Chris Tuck gave an overview presentation of this work prior to the tour, and highlighted two main research areas with the jetting processes, namely multi-functional properties and scaling down the process with nano “inks”. 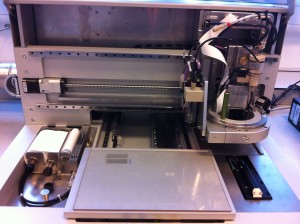 Another research project into inkjet came from Xaar in Germany — Werner Zapka pointed to the potential of optimizing inkjet printing in 3D beyond multi materials and multi-colour parts, to functional, embedded products produced in a single process.

Across the two days of the conference the presentations were pleasantly varied, or as Professor Hague said, “an intriguing eclectic mix.” I concur. It made for an interesting programme, with some notable highlights:

Chris Thorpe opened on the first day, and while I couldn’t see him from my seat (he had to present while sat down due to a recent broken something or other) his presentation was an engaging overview of a year long project (to date) that has utilized 3D scanning and 3D printing as a short run manufacturing method for producing train models and kits for railways modellers. Chris’ passion for his subject and the history of the railways was evident, but what I liked even more than that was this: “we’ve learnt many things about the first Industrial Revolution [with this project], which can help to shape the second.” His vision, based on his own project, of 3D printing is that the 20th Century was one that “made people want things,” while the 21st Century has the potential to “make things that people want.”

It was also gratifying to see Michaella Janse van Vuuren present. Michaella is a very talented designer, based in South Africa, that is excited and passionate about 3D printing and applies it in her art. She is also one of the people behind the Agents of the 3D Revolution exhibition in Johannesburg.

Paul Brody of IBM gave an engaging presentation that highlighted how IBM is seriously “preparing for the disruptive transformation of electronics design and manufacturing” that is on the horizon, courtesy of additive manufacturing. He presented some joint research that IBM has undertaken with Econolyst that maps current data in a way that points to the future in terms of economics and scale. He was also positively vociferous about open approaches, and in this vein, the full report, due out this month is going to be made freely available to anyone that wants it.

Also great to see the guys from 3DHubs telling their story. I hadn’t made the connection, to be honest, in that I didn’t realize their CV’s included Freedom of Creation and 3D Systems. Since launching 3 months ago, 3DHubs now has 400 (and counting) 3D printers and their owners signed up to the platform. In it’s simplest form, this is a really great idea and is born of credible ideology — they are passionate people and want to make 3D printing technology as widely accessible and easy as possible. There are still some kinks to iron out though, in terms of responsibility and reality.

Chris Sutcliffe did his very best grumpy old man impression during his presentation about 3D printed veterinary implants. Chris is an academic, predominantly researching metal 3DP processes at Liverpool university. He’s one of the original members of the RP/RM/AM/3DP community and knows his stuff – inside out and every which way — and is dedicated to the development of new manufacturing technologies by UK companies using the results of his research. A current project has developed veterinary implants (design and manufacture) but has been frustrated by the restrictions imposed when looking to commercialise it. But don’t worry too much, he was laughing heartily in the bar later that evening. He won’t be giving up any time soon.

And then, there was this year’s jaw dropping moment (actually, I think my chin was on my chest for pretty much the whole presentation), which came courtesy of Mark Tilley’s presentation. It’s hard to know where to begin really because there is a lot of fuzzy stuff – ie the company structure (parent company, secret research labs, investment group and the new company commercializing the process) and the fact that this is a completely new process that doesn’t have a name — generically or proprietarily.

I’m going to give a brief overview in this review and follow up with a dedicated post with more details. I’ll try and keep it simple here — the process itself is a photopolymer process that forms intricate lattice structures at various scales. It is arguably not 3D printing and it is definitely not additive manufacturing because the process does not involve layers. A specific light source is used to cure the polymer material in a vat, via ‘a mask’, in one pass. In terms of the materialization process taking place (that’s my own designated generic name for the process by the way) that’s it! It takes about 30 seconds. So a lattice part that would take the stereolithography process 40 hours (for example) to print is materialized in 30 seconds.

The exciting angles here are that this process overcomes two of the most notorious limitations of 3D printing, specifically the speed of the process and that it can produce high volumes of parts economically with the potential to scale up considerably. However, before we get too carried away, the process brings its own set of limitations — the most limiting being the Z-axis, which is severely restricted in comparison with “conventional” 3D printing. Also – photopolymers are generally considered to be limiting themselves in terms of functionality and durability. However secondary processes can overcome this — plating has proven to be very successful in a full range of metals including the ‘world’s lightest material’ as demonstrated with the clever dandelion image.

I collared Mark during a break in proceedings after his presentation, poor bloke, but he was very patient with me barraging him with questions. It can’t have been too traumatic, mind you, as he chose to sit by me on the coach to the lab so I got to probe even more. I still can’t quite wrap my head around it all – but as I said, more details will follow in a separate post.

Kudos has to go to Phil Reeves of Econolyst for bringing Mark over from the States to speak at Nottingham. Mark is an ex-pat actually, originally from Manchester so he was quite pleased to visit “home”! Phil originally met with Mark and his colleagues on a trip to the States, and concedes he was dubious, to say the least. He got into the secret labs though, and saw the process in action, and, unsurprisingly, his mind was blown.

Nice one Phil — and a great two days. A big hat-tip to Donna too, without whom the conference would not run as smoothly as it does.