Playing with the Building Blocks of Life: 3D Bioprinting Advanced by Brown Researchers

As we cross our fingers for a day in which organs can be quickly 3D printed from transplant patients’ own cells, our eyes will watch keenly every new development in the field of bioprinting.  The latest comes from Brown University bioengineer Dr. Jeffrey Morgan and surgery fellow Dr. Andrew Blakely, who have worked out a new technique capable of assembling tissues in large blocks.  With a device called BioP3, the researchers are able to “pick”, “place”, and “perfuse” pre-made living tissues into larger structures. 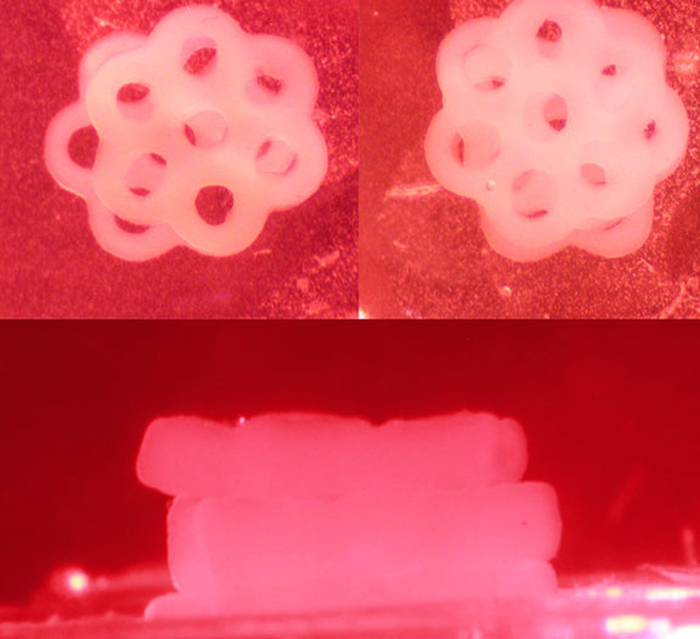 Via his startup, MicroTissues Inc., Morgan commercialized a technology for guiding living cells to self-assemble and create objects in the shape of spheres, toruses, rods, and honeycombs.  The BioP3 device takes this one step further, building these shapes on top of one another to construct larger shapes.  Morgan explains, “For us it’s exciting because it’s a new approach to building tissues, potentially organs, layer by layer with large, complex living parts. In contrast to 3-D bioprinting that prints one small drop at a time, our approach is much faster because it uses pre-assembled living building parts with functional shapes and a thousand times more cells per part.”

Described in a paper published in Tissue Engineering Part C, the BioP3 prototype was made with a number of parts that could be bought from a hardware store for less $200.  The building area consists of two small plastic chambers: one for maintaining the blocks of tissue and another for assembling the larger structure.  Above the clear box is a manual pick-and-place device that, using a peristaltic pump, picks up each block to be guided to the assembly area. The stacks of cells then fuse together over a short period of time.  Blakely says, “This project was particularly interesting to me since it is a novel approach to large-scale tissue engineering that hasn’t been previously described.”

The researchers demonstrate, in their paper, the ability to stack 16 toruses and four honeycomb shapes, with each honeycomb consisting of 250,000 cells.  A four-honeycomb stack adds up to one million cells, more than 2 mm thick.  Still a far cry from the total cells in an adult liver, about 100 billion cells, but Morgan reports that these stacks have similar density to that of human organs.  With nutrients, it’s also possible that these structures could grow even more.  At the same time, nutrients ensure that the tissue can continue to survive.  For that reason, the team ensured a constant supply of nutrient fluid to their honeycomb structures, perfusing nutrients and subtracting waste, allowing their tissues to survive for more than a day. 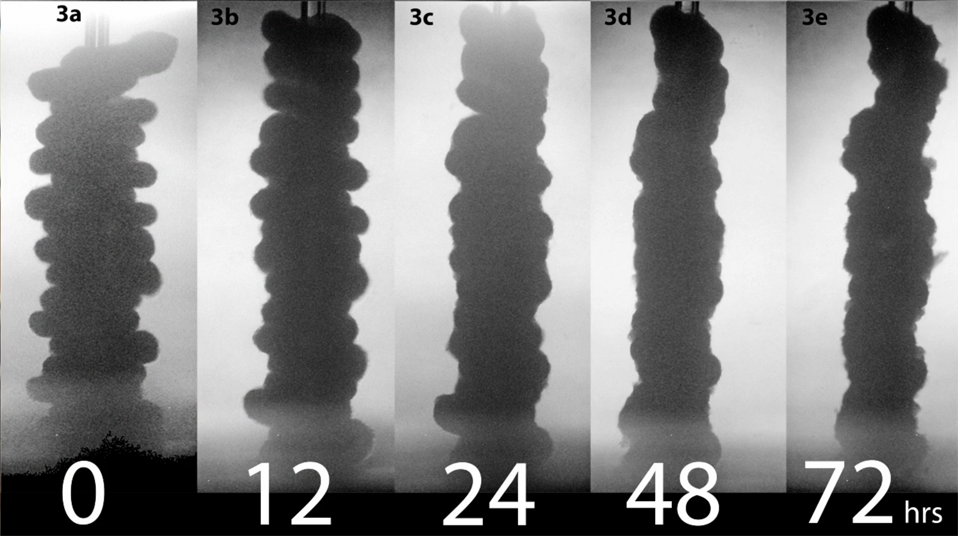 Their work outlines assembly with a number of different cells: H35 liver cells, KGN ovarian cells, and MCF-7 breast cancer cells.  While the latter might be used for the testing of chemotherapy or radiation therapy, the first two, when combined with other cells, could be used to construct more complex tissues.  In 2010, Morgan’s lab was also able to create an artificial human ovary, combining three types of cells into a single tissue.  And, as his lab has created similar honeycomb shapes 2 cm wide with 6 million cells each in 2011, the researcher believes that using BioP3 to construct larger, more complex shapes is not out of reach.

The BioP3 currently relies on a Etch-a-Sketch-type knobs to control the pick-n-place nozzle, with the assembly of 16 toruses taking about an hour to complete; however, the team is already working on an automated version of the device, thanks to a $1.4-million, three-year grant from the National Science Foundation.  Blakely elaborates, “Since we now have the NSF grant, the Bio-P3 will be able to be automated and updated into a complete, independent system to precisely assemble large-scale, high-density tissues.”

Moreover, the team will examine just how big and viable their structures can be, including how these cells work as a unit and how they change over time.  Morgan explains, “We are just at the beginning of understanding what kinds of living parts we can make and how they can be used to design vascular networks within the structures. Building an organ is a grand challenge of biomedical engineering. This is a significant step in that direction.”

As Brown applies for a patent on the BioP3, this technology could evolve the field of bioengineering significantly.  It’s possible that the technology could be applied to 3D bioprinting to assemble printed tissues, with the BioP3 acting as a metaprinting device.  You can watch more about the team’s research in the video below: