OpenBCI is in the business of open source biosensing devices, starting with an EEG headset capable of allowing the wearer’s brainwaves to control software and hardware.  Think controlling robots and quadcopters with your mind (No, literally, think it).  Publishing all of the schematics online and relying heavily on open source software, the startup has worked to make their low-cost brainwave controller board and accompanying 3D printed headset as affordable as possible. And, after a brief stint as a DARPA subcontractor, they launched their first Kickstarter in 2014, bringing their brain-computer interface technology to the masses with great success.

Now, OpenBCI has just hit Kickstarter for a second time with the Ultracortex Mark IV, the most recent iteration of their EEG headset, and, this time around, they’ve brought even more great partners on board.  Though just about everyone from the Korea Institute of Science and Technology to the Volumetric Society is listed on the OpenBCI campaign page as having helped  drive the development of the 3D printable headset, LulzBot may be one of the most important names on the list.  Not only has the 3D printer manufacturer worked with OpenBCI to prototype the firm’s headset designs, but, today, the two companies have become official hardware partners, announcing new plans to work together in various capacities, as OpenBCI begins selling LulzBot 3D printers on their Kickstarter and the OpenBCI online store. 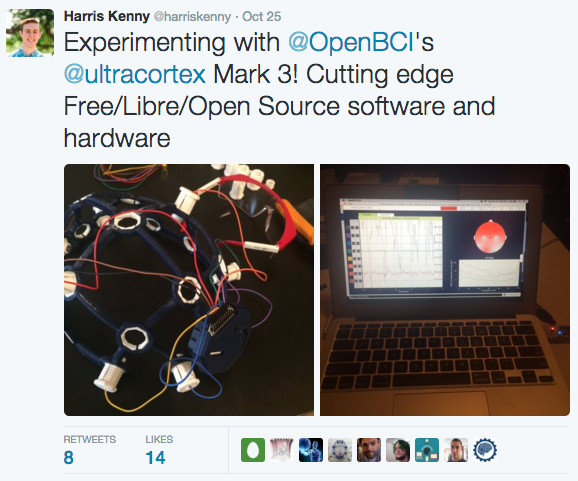 “As you know, LulzBot machines can handle a wide variety of materials, so we helped OpenBCI prototype their headsets out of different materials, like nylon, NinjaFlex, etc.,” says Harris Kenny, Vice President of Marketing at Aleph Objects, the company behind the LulzBot line. “So, we’ve already worked with them a lot.  And it’s going to be great taking this partnership even further.”

The first step to taking their collaboration to the next level is the addition of new rewards to the OpenBCI Kickstarter campaign.  If you head over to their campaign page, you’ll see that, in addition to the new $90 Ganglion Board, which converts electrical impulses into computer-readable data, and the complete Ultracortex + Ganglion kits, the are new product offerings that include a discounted LulzBot TAZ 5 3D printer and and a biohacking Megapack.

The Megapack is meant to include everything necessary to build Ultracortex headsets in batches of five or ten, in an educational, research, or hackerspace setting. So, this includes the Ganglion board, the dry electrodes, and all of the wiring (everything in the “Print It Yourself” Ultracortex Kits), as well as a TAZ 5 3D printer to actually 3D print the headsets themselves. In addition to being available as rewards on the campaign page, OpenBCI is also selling the TAZ 5 and the Megapack on their own online shop. “The idea is for hackerspaces and teachers that are running biotech classes to get a comprehensive kit that involves a 3D printer and the necessary, non-3D-printed parts to go about printing all of your own kits,” says OpenBCI co-founder Conor Russomanno.

Prototyping the Mark IV Ultracortex and the sale of LulzBot products is only the beginning of the partnership for the two companies, however.  Aleph Objects and OpenBCI are still working out all of the details, but they plan to progress the relationship as OpenBCI works to fulfill its campaign rewards. “Harris Kenny at Aleph Objects has been really great about helping us in developing the Mark IV. They’ve been really hands on, printing out headsets in different materials and shipping us prototypes in various materials that we don’t have access to in our shop. It’s in both of our long-term plans to continue improving the Ultracortex, the full OpenBCI system, using their infrastructure,” Russomanno says.

Future plans include OpenBCI joining LulzBot at CES in January, where they’ll be able to showcase their Ultracortex headsets to attendees, while the TAZ 5 produces additional devices on the floor.  On top of that, Russomanno says that he also hopes to take up a brief residency at LulzBot HQ in Loveland, Colorado, where, if the plan comes to fruition, “We’ll be hands-on with the LulzBot team doing the R&D for the Mark IV headset in Colorado.”  And, though the possibility is still far from concrete, there is a chance that LulzBot could help with the production of Ultracortex headsets in the future.  Both Russomanno and Kenny, however, emphasized that this was an idea that was only being tossed around. 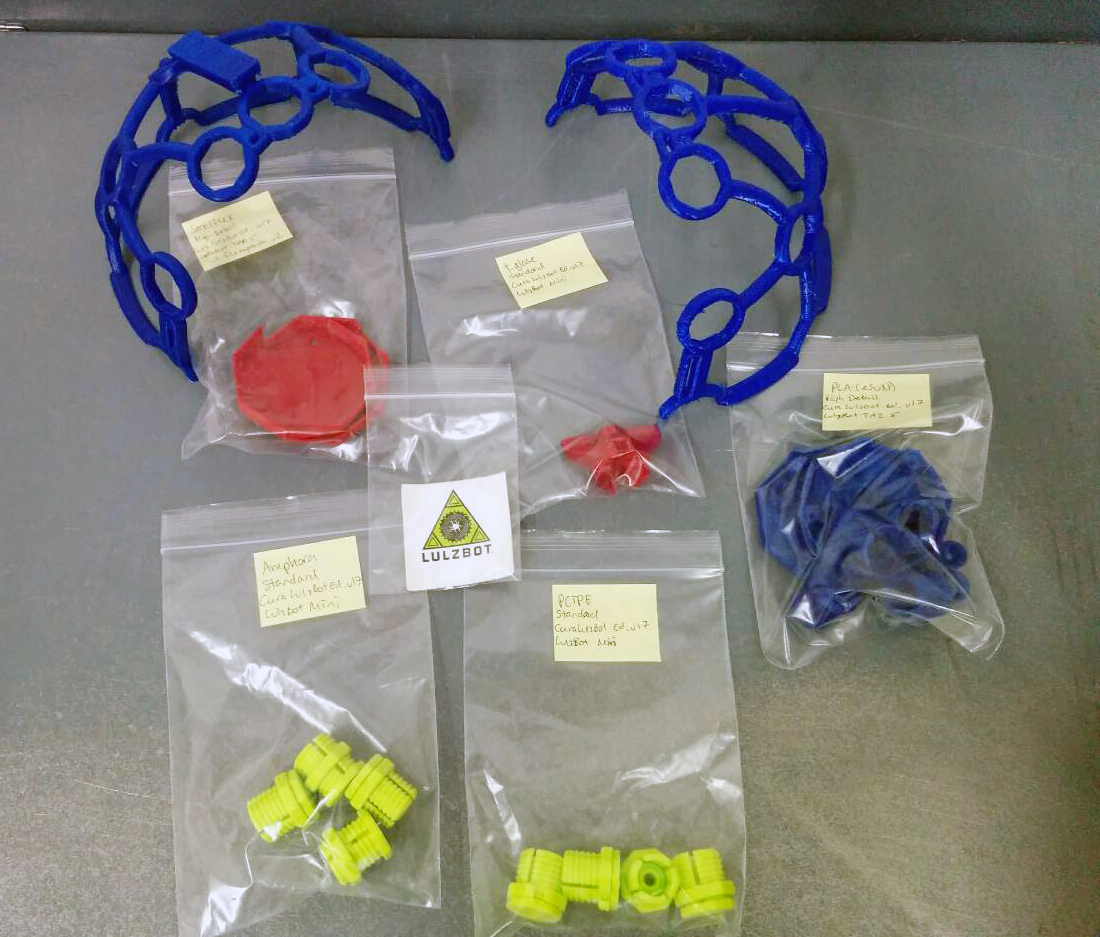 Kenny does explain that they are examining future opportunities, “Beyond our existing work together, we are discussing future partnerships in product development and production. This could include robotics and other technology that would integrate with the OpenBCI platform. We have discussed potentially collaborating through on-site design sprints, using the LulzBot 3D printer cluster for manufacturing, using Aleph Objects’ Open Hardware Assembly Instructions for production, and leveraging Aleph Objects’ global distribution channels.”

Both partners agreed that the OpenBCI platform was a stand out example of the lengths to which 3D printing, and open hardware more generally, could be implemented to create a functional and innovative product. Russomanno says, “Our headset is a really practical application of 3D printing, because, with 3D scanning and 3D printing, we’re able to design custom wearables. And, with something like the Ultracortex, it’s really important to get a comfortable fit that is also scientifically valid. So, we’ve done a lot of work to scan people’s heads – you know, I have a custom EEG headset, which may be the first of its kind. “

If you haven’t seen what OpenBCI’s platform is capable of, they have a ton of awesome examples to check out on their campaign page.  Reading EEGs, their microcontrollers can be used to create music with brainwaves, but the board can also be used to translate electrical impulses from muscles, including the heart.  This means that it can serve a very practical medical purpose as an electrocardiogram device or to translate muscle data for controlling bionic limbs. And, with 3D printing, any contraption made for OpenBCI’s boards can be customized to the user.

In addition to the actual applications of OpenBCI’s technology, it’s interesting to see how this partnership will see OpenBCI and Aleph Objects execute their separate visions for the respective futures of their companies.  Russomanno tells me that their EEG headset was originally showcased as a fashion wearable at Inside 3D Printing in New York and that they plan to work towards wearables, “bio-accessories”, and other biotech devices. For instance, they hope to partner with 3D printed robotics organizations to “become a printing distribution arm for them.”

And, as they create more biodevices and applications for their headsets, they’ll be making all of that accessible online, documentation and all, “The Mark III has a pretty thorough Read Me and how-to guide, and we’re going to keep adding to our GitHub to provide more hacks and new documentation for robotic arms, 3D printed prosthetic prototyping kits, and, in the long-term, all sorts of 3D printed gadgets, like hybrid assistive technologies, and things like that.”

At the same time, Aleph Objects has been expanding its partnerships in relation to open hardware, starting with the distribution of bq’s open source, 3D printed 3D scanner earlier this year. But Kenny tells me, “We’ve been an open hardware company from the start.  In addition to the printers, all of our computers run on open source software and our team has a lot of interest in open hardware, like open source laptops, drones, and things like that.” At least in my mind, it would be easy to envision Aleph Objects developing and selling open hardware products, alongside the bq scanner.

The open source nature of OpenBCI’s hardware, then, is a perfect fit for Aleph Objects, something that Kenny seems to reinforce,“We are thrilled to be working together, and there is a lot of potential to work even more closely together in the future. We look forward to finding ways to add value to each others’ efforts, and collectively grow the Free Software and Open Source Hardware community.” 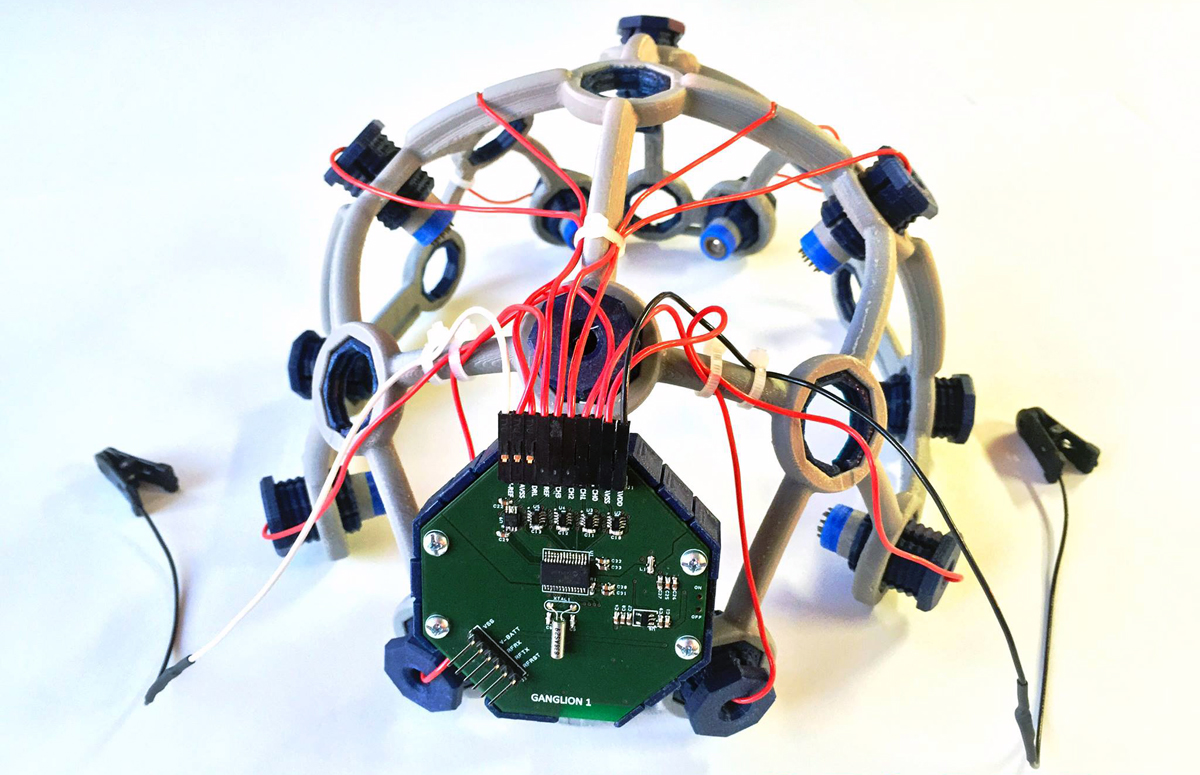 With both open hardware companies supporting one another, it’s possible to imagine the huge amount of innovation that can be accomplished by both parties.  And, because all of it is made available to the public, the knowledge and capabilities brought about by both partners can be quickly spread through the open source community.  In the same way that RepRap 3D printers are hugely responsible for the 3D printing renaissance currently taking place, it’s not difficult to envision biohacking experience a similar revolution through companies like OpenBCI.

Soon, the ability to control hardware and software via the electrical impulses in one’s body could be as popular as desktop 3D printing is now.  Heck, maybe even your next 3D printer will have a wireless mind control interface, instead of an on-board LCD screen. And, instead of SD cards and thumb drives being used to upload files for 3D printing, we’ll use our imaginations to upload files telepathically! I’m clearly getting ahead of myself, but I can’t think of a much better reason to buy a 3D printer a bunch of mind control headsets right now.