Makerbot is continuing its Digitizer updates to ensure that, since the product’s unveiling at SXSW, the public’s excitement can be maintained until its actual release this fall. In their latest update — the third — Makerbot engineer Jamie visited a local thrift store and picked out some of your grandma and grandpa’s old stuff to see how accurately the Digitizer could capture the details of these porcelain figurines.

The desktop scanner, a turntable that uses cameras and lasers to create a 3D rendering of a physical object, is meant to make 3D modeling easy for consumers. Not only does it bypass the need for CAD software expertise, but the device is also meant to avoid the hassle of any post-production work on your model. Rather than scan something with a Kinect-based turntable you construct yourself or a costly handheld device, the Digitizer turntable allows for a seamless scan process and your renderings are automatically stitched together with the company’s software. That way, you don’t have to spend hours trying to manually combine separate 3D models into one.

The hardware is inching the company closer to the ultimate goal, as defined by Autodesk CEO Carl Bass: “We think 3D printers should be no harder than taking a Word document and sending it to your inkjet printer. You’re modeling a creature, you’re modeling a part, you’re using any of the 123D apps, you hit print and it comes out on your MakerBot.” 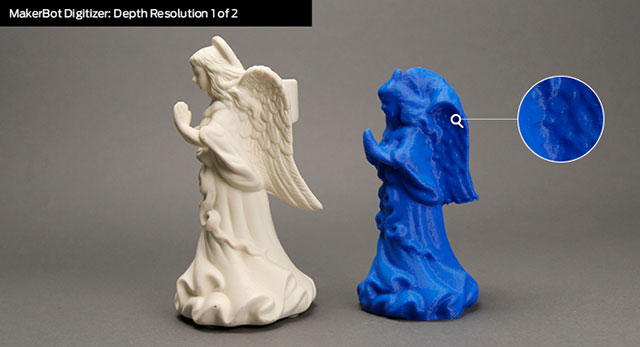 The Digitizer seems to have worked its magic! While the detail isn’t as clear as with high-end industrial scanners, it’s certainly ready for consumers. You can see that it manages to recreate the small indentations and other minor accents found in the original objects. The copies, though not perfect, are pretty good! So good, that you can almost see Jamie grasping the two objects, a lighthouse and its copy, in his hands and wondering what the future of the Digitizer holds, as it and 3D printing develop. Perhaps he examines the porcelain version and thinks that it may, too, be a copy fabricated from a more advanced scanning and printing system from a previous future. And the other statues, maybe even the thrift store itself, are only simulacra. A highly refined and larger – infinitely larger – scanner well, something like that could certainly copy a human, a whole world even. As Jamie moves his glassy eyes from the porcelain and plastic objects to his own smooth hands, there’s a faint memory there of something born from a desktop lifetimes ago.