Makerbot has, once again, gone all out to maintain its place in the 3D printing spotlight. Said spotlight was glaring down on the company’s CEO, Bre Pettis, once again on Friday, afforded by the occasion of the opening day of SXSW 2013, the event where, four years ago, Makerbot introduced the CupCake – its very first 3D printer. Indeed as Bre was introduced to the crowd for his keynote presentation this time around, he was hailed as the “King of 3D Printing”. Now I am, for the most part, a Bre fan, but I think this is an accolade too far, and I am not convinced in the slightest that that crown belongs on that head!

I am going to stick with ‘poster boy’, because this is a role in which Bre excels — as a master of demanding attention for and evangelizing Makerbot, 3D printing in general and some praiseworthy applications. And in a masterstroke in this vein Bre used SXSW to make two, fairly substantial, Makerbot announcements to the world. 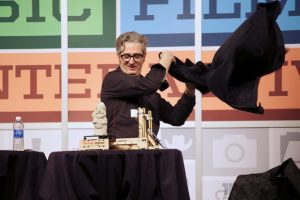 In true effervescent style, he introduced the Makerbot Digitizer, a low-cost 3D scanner for creating digital models specifically for 3D printing on your Makerbot (but one assumes it can and will be sold separately!). Using cameras and lasers to capture the 3D data from an object on a moving turntable, this is a product that Pettis believes can, and will, be used by people that have previously never had 3D scanning experience. He foresees the applications for the Digitizer in the business world and in schools — which is a given. But also, in the home. Well, maybe. Still only at the prototype stage of development, the Makerbot Digitizer is scheduled to start shipping this coming Autumn.

Bre clearly outlined his vision for Makerbot as a corporation when he said: “This takes us from being a 3D printer company into being a company that’s building out a 3D ecosystem.”

And it’s no longer just a confined ecosystem, as highlighted by Makerbot’s second announcement at SXSW. The company is partnering with software giant Autodesk.

Carl Bass, CEO of the $2 billion software giant, was also at SXSW for the announcement that Autodesk will, alongside Makerbot, market and distribute the Replicator 2 / 2X 3D printers via its own website as well as through Instructables which it acquired back in 2011. The DIY angle sits well with Autodesk’s latest developments with its (free) 123D applications for designing in 3D. As such, designs created using these apps can be exported directly to a Rep 2/ 2X without the need for manipulation and the further complicated steps that generally exist between design and the print button. If this claim proves to simplify this process in the way the marketing suggests then they could well be onto something here.

And that, apparently, is the key goal, according to Bass: “We think 3D printers should be no harder than taking a Word document and sending it to your inkjet printer. You’re modeling a creature, you’re modeling a part, you’re using any of the 123D apps, you hit print and it comes out on your MakerBot.”

There is no denying that this partnership certainly gives Makerbot a resounding endorsement from a mighty 3D warrior — it will be very interesting indeed to see how far this pushes 3D printing into as yet untapped markets, and if indeed, the company will be able to ramp up production to meet demand.