MakerBot continues to make its way into mainstream stores this week.  After Home Depot agreed to extend their MakerBot pilot by supplying the company’s 3D printing products in 39 stores across the US, the Stratasys subsidiary has now entered into an agreement with office supplier Staples to sell MakerBot Replicator 3D Printers and MakerBot Digitizer Desktop 3D Scanners in 50 select Staples stores across 18 states. 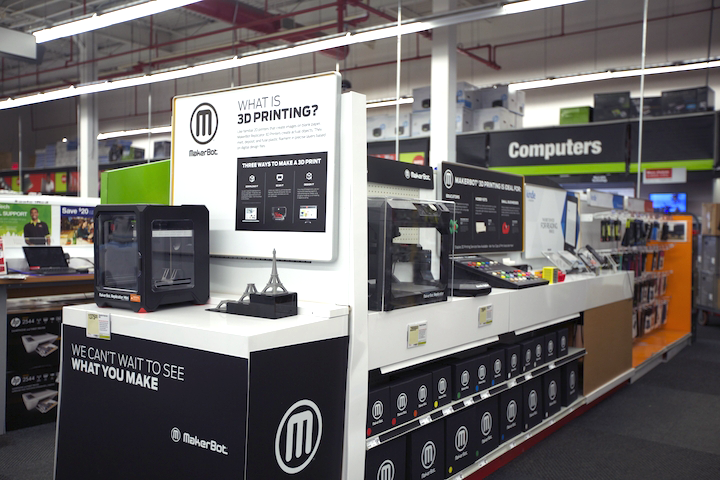 50 different Staples locations will feature MakerBot kiosks complete with 3D printers, the Digitizer scanner, and filaments, representing the complete MakerBot 3D Ecosystem.  With live demonstrations and machines printing products on-site, Staples patrons will learn how 3D printing works and, surely, be enticed to purchase the company’s products.  Not only will the office retailer be selling consumer printer products from MakerBot, but they will also be offering 3D printing services through Stratasys’ RedEye service.  Because this is an exclusive agreement, it’s now clear that Staples has abandoned its previous product partner, 3D Systems, to sell MakerBot products over offering 3D printing services, scanners, and printers from 3D Systems.

Jenny Lawton, acting CEO of MakerBot, said of the deal, “We are excited to partner with Staples to help bring MakerBot 3D printing technology to Staples customers. Using the MakerBot 3D Printing Ecosystem, Staples customers can now integrate technology into their workflow, lesson plans and transform their design process.” Mike Edwards, executive vice president of merchandising at Staples, Inc., added, “Staples is committed to offering its customers the most innovative products and services wherever they want to shop, in-store or online. By bringing the MakerBot 3D Ecosystem to Staples, we’re helping our customers make more happen with their business or in their classroom.”

In addition to the locations listed below, MakerBot products will also be available online via Staples.com.  You can find all MakerBot retail locations through the MakerBot store locator, as well.

Writing at this time last year, there were skeptics that thought 3D printers weren’t quite ready for consumers. Maybe they were right, but, regardless of whether or not the technology is ready for the mainstream, it’s at least made it to the mainstream. For better or worse!