The Journey of Laywoo-D3: An Interview with Wood Filament Inventor Kai Parthy

From that first mysterious video of the wood filament, Laywoo-D3, being printed, I was intrigued by the mysterious person behind the camera, writing the white text against a blue background.  And when I first wrote about Laybrick and found the name of the products’ inventor, I tried to learn more about him, but any information about the elusive materials developer was few and far between. Finally, I found Kai Parthy’s website, CC Products, and was finally able to reach out to him for an interview.

Kai Parthy’s journey to feedstock development is as windy as the journey of his feedstock.  He grew up in Communist East Germany. I asked him to tell me a little bit about what that was like.  Kai says,

Not to compare it with North Korea, but here’s an example: if you wanted to travel to meet your grandmother in West Germany, for example, the police would say, ‘No.’ Then, you paint a big poster, fitted outside of your window at home and viewable to everybody in the street that reads, ‘I want to see my grandmother in Hamburg.’ Then, the police or secret service (STASI) picks you up, sends you to prison for one and a half years, and, finally, releases you to Hamburg.

Anticipating my incredulity, Kai insists, “It’s true! It’s happened! And not only once!”

Eventually, in 1986, Kai decided he wanted to get to West Germany via a much quicker route, escaping over the border to Communist Bulgaria, where he was then able to escape to a free Yugoslavia, “I crossed a little rock mass, then crossed a little minefield, arrived in Yugoslavia, and, then, as a free person, I went to West Germany.” Kai ended up becoming a shoemaker for dancers in the theater. While working in the theater, Kai experimented with artificial leather for refining dancers shoes. He later studied in Cologne, learning process engineering, and, to pay his bills, he worked as a caretaker at a local music club.

It wasn’t until 2011 at the Euromold Fair in Frankfurt that he first came across the Rapman, the first 3D printer kit, which he bought spontaneously. As is often said, necessity is the mother of invention. So, while trying to overcome one of the biggest problems at that time, which was the warping that occurred during a print without a heated bed, Kai went to his garage and got to inventing.  He began mixing other polymers into standard ABS, to give the ABS better properties for 3D printIng. He blended softeners and flexiblizers into it, telling me, “I was like a mad scientist, the kind that I always wanted to be; I’ve been making patents for gadgets and useful things for the past 20 years.” Kai’s website, CC Products, is actually filled with a number of his inventions and some of them have already been taken to market. See a self-produced video for an icemaker he patented below:

And it was during this process, of looking for a zero-warp filament, that Kai came up with Laywood. He got to combining different minerals and pigments to see if they would reduce the warp effect. He used charcoal, then wood, finding that he could, in fact, achieve a lower warp with these materials. Creating a product with Laywood’s famous tree ring effect just happened by accident. If necessity is the mother of invention, then it seems that accident is invention’s aunty. 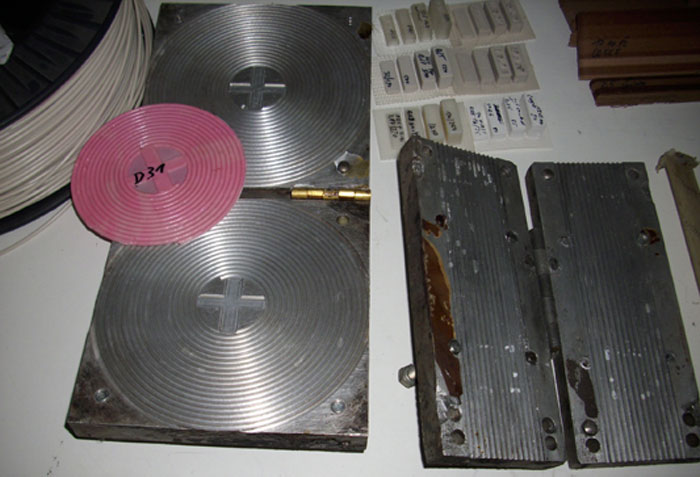 Kai is a true maker, mixing filaments in his garage and testing them in his kitchen. Kai tells me, “It’s true! I made my first blending with a hot oven plate and a cordless electric screwdriver. I pressed a hot melt into a waffle iron that happened to have 3 mm long grooves And I would feed these sticks into my Rapman printer.” After that, Kai would head to a local university with his hot melt and render his kilogram spools in their plastics lab.

In some ways the tests that Kai performs are those of necessity, as well. If the filament will go through his extruder at a given temperature and with the proper viscosity – so as to run through the nozzle – it’s already passed the first test. He also looks to see if the filament will stick onto other materials, if it shrinks, and if the object printed from that material can be used in various temperatures. Can it stand the heat oven exposed rooftop? Or must it remain in your basement? To understand the thermal properties of his filaments, he uses a self-built vicat softening point tester, which measures the softening point of plastics. For the mechanical properties, he first puts his materials through subjective testing with his hands, but moves to the objective method of a tensile testing machine at the local university.

Now that his filaments have proven successful in the marketplace and on the print bed, Kai has gone into full production. He works with a local welding rod company near his hometown of Cologne, where owner Andre Sperlich gives him plenty of time to produce his filaments using Andre’s extruders. “But, about having $1 million of my sleeve I cannot enlarge the company threefold. Therefore, we always reach our limits.” Kai says that he only became a manufacturer due to inevitability. He’d much rather spend time inventing and let the filaments be produced under a license. 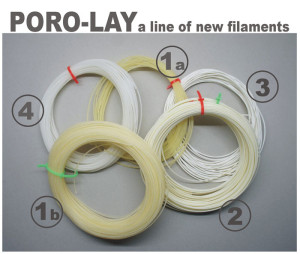 Until he can find somebody to license those filaments, he’s going to keep on working. In the near future you may see a ceramic filament developed by Kai. And we’ve already seen his Poro-lay series of filaments, which he’ll be patenting, to prevent others from copying. In the not so distant future, you might be able to see printable thermosets. Unlike thermoplastic polymers, which melt with heat, thermosets cannot re-soften after becoming hard. He also dreams of clear aluminum, Aluminium oxynitride, but knows that that’s probably too fantastic for 3D printing through an extruder.

I asked Kyle where he saw the future of 3D printing and material manufacturing. Perhaps realistically, Kai said, “It´s easier for me to say what 3D printing will not achieve: You’ll never be able to print your broken car window, a mobile phone for yourself, a complete jacket (though parts of clothes are already printed as design concepts.  3D printers will never print a bag of cement, but only specialized parts for machines. 3D Printers will never be an egg-laying wool-milk-sow, as is often predicted.  When 3D printing first took off, one claim was very popular: ‘This is a self replicating machine.” You know, this machine can only produce some plastic parts for itself, no screws, no electronics, only plastic.  But the (wrong) claim is living on in the common mind that 3D printing may produce everything in the future. Sorry, it may not!”

Kai admits that he may be framing things negatively, “Sorry for my pessimism. Today we should realise that a lot of smart innovations (also 3D ideas) sleep in the patent literature. Their inventors never had the money to realise the ideas they claimed. Perhaps, some of these ideas will be detected and commercialized, first for industrial use and later directly to consumer devices.  But, in short, nothing real big* will happen in the next 10 years. Most of the basic techniques we use now were already invented!”  Perhaps, what’s plaguing Kai more than 3D printing’s future is the climate’s, saying, “OK! We can mix curious ideas together. Why not 3D print cold things? Cold Deposition Method, instead of FDM. We can print glacier rocks in the arctic to heal the world.”

Kai concluded our conversation with the following, “In any case ! sell your 3D stocks before 10 years are gone 😉”