Recently, we’ve received a little flak for covering a certain pen-like piece of tech that may or may not be considered 3D printing. There’s definitely a divide of strong opinions, but probably a larger proportion of people that are not particularly bothered either way. However, at 3DPI it is also increasingly evident that some folks out there are driven by SEO, and may just be inserting the phrase “3D printing” into their PR and blog posts to draw internet traffic. A lot are obvious, some, not so much. Before dismissing projects as non-legitimate forms of 3D printing or additive manufacturing (AM) you have to work within a definition — it’s obvious many people have variations — and even then, interpretation leads to debate.  But, for the sake of argument, and in the context of this article let’s use Wikipedia’s definition here:

Additive manufacturing or 3D printing is a process of making a three-dimensional solid object of virtually any shape from a digital model. 3D printing is achieved using an additive process, where successive layers of material are laid down in different shapes. 3D printing is also considered distinct from traditional machining techniques, which mostly rely on the removal of material by methods such as cutting or drilling (subtractive processes).

Based on that definition, for a production method to be considered 3D printing, it requires 1. the translation of a digital model into a solid object, 2. a layer by layer process, and 3. that it’s not subtractive.  Now, let’s consider a recent story from MIT and figure out if it fits into the above definition. 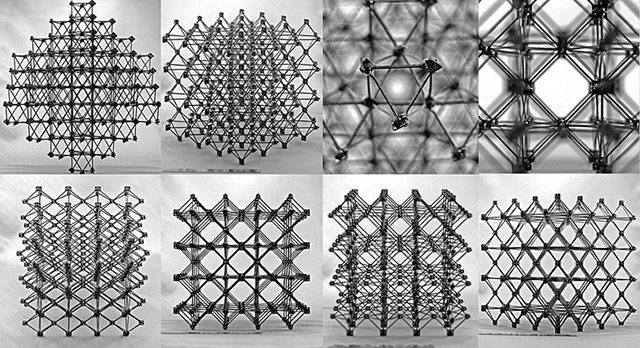 Postdoc Kenneth Cheung and director of MIT’s Center for Bits and Atoms, Neil Gershenfeld, have developed a new construction process they say is inspired by 3D printing.  In trying to answer the question, “Can you 3D print an airplane?” the researchers decided that AM was probably not the most practical method for constructing an airplane.  Instead, they are in the process of developing interlocking, chainmail like structures that will form the basis for building blocks.  Rather than printing them, they are considering the use of, as the MIT news blog puts it, “an assembler robot that can crawl, insect-like, over the surface of a growing structure, adding pieces one by one to the existing structure.”  “Insectlike”? Count me in! 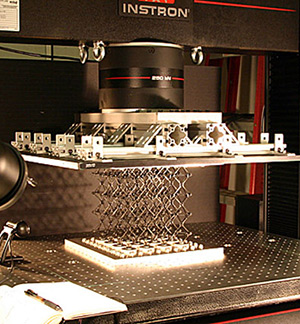 The benefit of this chain link material is that it could yield structures that are easy to repair and extremely lightweight, while supporting the same amount of force as traditional structures.  The octohedral formation, or “cuboct structure”, of the composite is similar to that of perovskite, a mineral that makes up a large part of the Earth’s crust, allows force to be evenly distributed all across the material. Its lattice-like makeup also makes it so that, If a tear were to occur, the area where the damage was done can be replaced with new material. The new material can be linked together piece by piece so that the proposed robot could construct airplanes and rockets (“There’s something on the wing!”) with more complex geometries, as the composite is less stiff than more tightly packed materials, but just as strong.

The researchers have admitted that they were simply “inspired” by 3D printing and are making no claims that what they’re doing is 3D printing.  But, I began to wonder, is a terrifying robot that crawls around putting flat pieces together a form of additive manufacturing? If it’s a robot, then, surely, it will be crawling around based on instructions from a computer that will rely on a digital model.  The disturbing machine will, also, most likely build from the ground up.  And it will be adding and not subtracting.  To me, this creature of unknowable horror, is sort of like an independent print head that can build up successive layers based off of a 3D model.  It’s not sintering or extruding the lattice structures, which will be mass-produced.  Really, it’s not producing the material itself, but the ABS of a FDM machine and the actual powder that’s fused with SLS are not, in themselves, formed by printing. In my eyes, MIT’s robo-demon assembly process is a 3D printer. 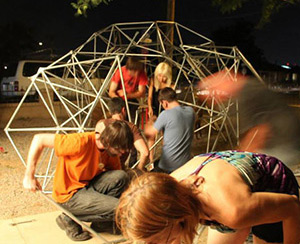 Of course, blurring the lines surrounding the definition of 3D printing is a slippery slope.  Arcology Now!, a group in Arizona that wants to produce affordable and easy to construct housing, claims that they use a human 3D printer in building their projects.  Their CNC’d metal bars have instructions engraved onto them so that, without knowing the overall plan, builders can connect pieces together to form a structure that was designed via CAD.  Recently, silkworms crawled across a metal frame to manufacture silk structures.  Are these things 3D printers?  We’re definitely getting a little loose with the definition here.

And maybe that’s a little too loose because, if we considered those methods of construction to be additive manufacturing, then we might start going further: saying, as Bill Nye tweeted, that the uterus was the original 3D printer.  Or we might say that humans were printed by evolution.  Or even that the Earth was printed by entropy, time and the unfolding of the Universe.  Especially if we were to discover a series of CAD files at the end of the cosmos that detailed a complex algorithm for the time-layer by time-layer printing of life itself.

Once we’ve reached the end of existence, it becomes clear that we’ve gone too far and should have restrained ourselves.  For the sake of simplicity, easy conversation and mutual understanding, let’s step back a bit.  Let’s allow such examples as the silk worms, the human hands, the insectoids to exist in the ongoing dialogue surrounding 3D printing as examples to enrich the creative process, challenge our conceptions about the world and to help us think of new ways to additively manufacture.  But maybe we shouldn’t call them 3D printing just yet.