Stratasys  has revealed how the University of Tsukuba, Japan, is using one of its 3D printers —  an Objet350 Connex — as part of its advanced R&D program for sports science and Olympic training. Conducting R&D in three key areas: sports equipment, training and conditioning, the university research team, led by Professor Norihisa Fujii, has already achieved notable success, having developed customized equipment used by Japan’s fencing team, which won the Silver medal in the 2012 London Olympics.

For this particular application, the hilt of the fencing sword must fit the fencer’s hand perfectly, even a slight difference in the shape of the hilt can spell victory or defeat. Before the advent of 3D printing, there was only one type of fencing hilt in the world, and each competitor had to personally file the hilt to customize the fit and achieve a non-slip surface. If the sword ended up breaking, it was almost impossible to get another one with the same fit quickly, or easily.

For the 2012 Olympics last year, the researchers at the University of Tsukuba scanned the actual equipment used by the fencers in 3D, and the resulting polygon data was then incorporated into 3D CAD. The 16-micron accuracy of the PolyJet based Objet350 Connex 3D Printer enabled the researchers to produce iterative prototypes of each sword with minute variations according to the athlete’s feedback.  A total of 70 prototypes were produced.

Mr. Osamu Takeda, the researcher who managed the modelling of the prototypes commented, “Players are not engineers. They talk about their requirements instinctively. So, bearing this in mind, we develop various patterns based on different assumptions. With the Objet Connex multi-material 3D Printer, we can do this easily. We can respond flexibly and promptly because the machine is so accurate.” 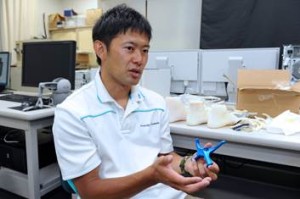 The customized, completed hilts were manufactured in April 2012, three months before the London Olympics. For the first time in fencing history, each competitor had five spare hilts, providing a “sense of security.”

“Whatever the sport may be, it’s all about designing customized equipment to enable the athlete to maximize his or her personal best,” said Jon Cobb, Executive Vice President Marketing, Stratasys. “Stratasys 3D printers have a long history with the sports world, spanning everything from the design of customized running shoes to the 3D printing of end use parts for bikes and snowmobiles. The accuracy of our technology and the durability and flexibility of our materials enable sports equipment designers to develop truly breakthrough concepts. Also, the fast turnaround time of 3D printing means that the athlete can try several design iterations until the equipment exactly matches personal preferences.”

The University of Tsukuba is now exploring other 3D printing sports applications such as protective equipment for gymnasts, shoes for javelin throwers, triathlon wear, sailing masts, a footwork assessment system for badminton, and more.