Eh, Go 3D Print Your Mother a Dinosaur, Why Don’t Ya?

Chances are you’ve already watched every lecture on paleontology on the internet already, but, in case you missed it, I’ll point you towards a recent talk given by Dr. Kenneth Lacovara, Associate Professor in the Biodiversity Department of Drexel University.  In it, Dr. Lacovara explains how paleontology is still very much the same science as it has always been, digging in uncomfortable climates to excavate fossils of long-dead specimens for later study in a lab. He also points out, though, that one technology has very much pushed the science into the 21st century.  (Hint: it begins with a 3 and ends with an ‘inting’.)

After Dr. Lacovara and his team have spent grueling hours in unforgiving circumstances to drag an old dino bone from the Earth, there’s the trouble of examining it and displaying it in a way that doesn’t damage the quality of the specimen. With 3D scanners and CT machines, however, Lacovara can create digital copies of the Jurassic parts for a variety of applications. Not only do 3D models of the files make for non-degradable representations of the skeletons he uncovers, but such models can be used to simulate evolutionary iterations of dinosaur physiology.  Paleontologists can simulate which dinosaur muscular systems, for instance, will survive under what circumstances and pass on their genes to the next generations so that we might project the course of evolution. Below is an example, which Lacovara discusses in detail in his lecture, of a reconstructed Thoracosaurus neocesariensis (sort of an old-timey crocodile) that moves based on programmed muscle mechanics, as opposed to frame-by-frame manipulation of individual body parts on the part of an animator:

DIGITAL PALEOART: Reconstruction and Restoration from Laser-Scanned Fossils from Evan Boucher on Vimeo.

Of course, digital models have some disadvantages because they don’t exist in the tangible world. 3D printing the models, thus, creates a method for testing the bones in ways that a virtual environment won’t allow. Lacovara pointed out that paleontologists can test out real world mechanics by 3D printing replicas of dinosaur parts and assembling robotic structures out of rubber bands, glue, and processors. They can then test how a dinosaur may have behaved in an actual physical environment. 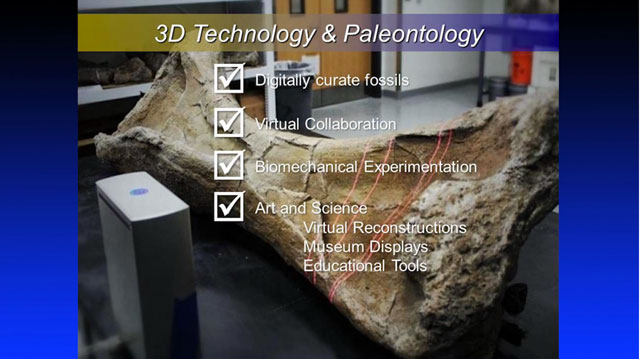 3D printing, then, gives experts access to physiological information that would not be available with authentic dinosaur bones, either out of fear of destroying original evidence or because real dinosaur bones are many times larger in size than their 3D-printed counterparts. And, since the models can be transmitted digitally, specimens salvaged and scanned by one team on one side of the world can be sent to another team on the other side to allow for cross-institutional and interdisciplinary collaboration. Of course, it was possible to construct dino replicas in the past, by creating moulds of the original specimens, but, as we’ve learned about casting, moulds don’t always capture the fine detail that 3D-printed models do and will break with time. If museums, on the other hand, have access to a 3D printer, they can print themselves multiple models of varying size, without relying on huge shipping costs and the need to share actual specimens with other institutions.

What’s left then? If we can already print accurate, animatronic replicas of dinosaurs, then my imagination is, naturally, wandering to the process of combining the technology with bioprinting and cloning. That way, we can have semi-organic dinobots ready to rampage small islands or even to fly into space and fight planet eating robots voiced by Orson Wells. No?