colorFabb Releases its Own Brand of Wood Filament

For awhile there, the mysterious Kai Parthy held the title for most innovative filament developer for FFF 3D printing, first making waves with his LAYWOO-D3 wood filament, then his pseudo concrete LAYBRICK, and, finally, the bendable BendLay. At London’s 3D PrintShow, however, Dutch material manufacturer, colorFabb, released its own wood filament that may prove to be quite the rival to Parthy’s.

According to colorFabb, the new WoodFill, which comes in a Fine and a Coarse variety, “looks like wood, it feels like wood and it even smells like wood.” What differentiates the two types is the wood fibres that are used.  WoodFill Fine uses smaller wood particles and, thus, can be printed using a standard .4mm nozzle and is available in both 1.75 mm and 3 mm spools. The Coarse variety, on the other hand, necessitates an .8mm nozzle due to the larger size of the wood particles.  As .8mm hot end aren’t standard in the 3D printing community, colorFabb supplies .8mm drills for those who want to drill their own nozzles. The resulting prints, as seen below, have a very appealing texture to them. As Gijs at colorFabb tells me: “It’s actually really great fun to print with bigger nozzles opposed to the standard 0.4mm size, you’ll get very sturdy prints in no time at all! Especially vases work really well with 0.8mm nozzles. Woodfill coarse is available only in 3mm filament.”

Both filaments can be processed at temperatures between 195 and 230°C with an extruder nozzle diameter of .4mm.  WoodFill is made up of about 30% pinewood and 70% PLA, compared to LAYWOO-D3, which is made up of 40% recycled sawdust. Unlike LAYWOO-D3, WoodFill comes on a spool for convenience sake. The first shipment of WoodFill will be in the first week of December. At €40 (about $54) per .75kg spool, the new wood filament is about half the price of LAYWOO-D3 offered at Matter Hackers, which isn’t bad at all.

Also in the first week of December, the colorFabb team tells me that they will be launching its tutorial site,learn.colorfabb.com, meant to teach users about 3D printing, designs and 3D printer calibration. As they explore the use of their printlab’s various printers, which includes three original Ultimakers (one with a dual extruder), 1 Ultimaker 2, a Prusa I3, a Felix 2.0, Makerbot Replicator 2s and a Delta Tower, and develop their series of filaments, they plan to share their experiences with their users.  By testing their new materials on a variety of machines, they’ll be able to demonstrate how each machine responds to colorFabb filament.  The site will also double as a blog that will work in tandem with their new webshop to be launched a bit later.

I asked the folks at colorFabb if they had any desire to enter into the production of other experimental materials.  Here’s what they told me:

colorFabb started officially March this year and we’re working very hard to keep expanding the range of our filaments. When we started, the focus was on our PLA/PHA blend and the many colours it is available in. Now this basic PLA/PHA product line is up, we’re focusing on specials and composite materials. So woodFill is our first venture into the composite materials and it will be likely that other composite materials will follow. An example of a special is colorFabb XT, a very tough, transparent and temperature resistant filament. Other specials we’re working on right now are flexible materials, conductive materials and soluble materials. I’m sure many others will follow eventually.

That sounds like some exciting stuff. I’m especially looking forward to the conductive materials.  I wonder if it’s anything like the Carbomorph composite developed out of the University of Warwick. As nothing but a writer for 3DPI, with limited engineering skills, I’m wondering if I’ll ever be able to contribute anything more than words to the 3D printing community. If I do, I think I might consider developing materials… 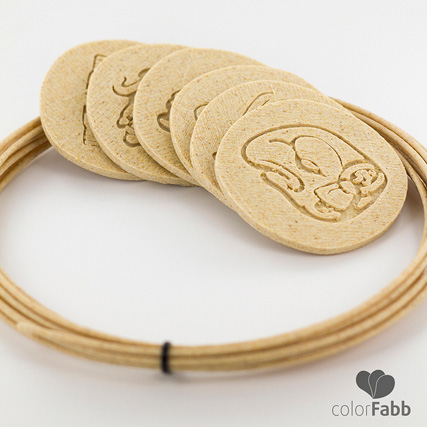