Can Organs Be 3D Bioprinted? A Stem Cell Trachea Will Tell

In four limbed creatures such as human beings, the trachea is the windpipe that lets the air we breath flow into the lungs: just like life, it is fragile. Without it we could not breath, nor speak, nor live. Many lung and airway conditions require a tracheotomy, a painful procedure in which a tube is inserted into the neck to allow the patients to breath. But they still cannot speak and are constantly at risk of infections.

A trachea, is not a bone, that could more easily be replaced by an implant 3D printed out of different biocompatible resins: it is cartilaginous so it needs to be, somehow, grown. For patients to tolerate it, it should be grown out of their own stem cells and for it to fit just right it should be 3D printed, or bioprinted. That is the goal of an experiment, recently conducted with promising results, by a team led by Faiz Bhora, MD, Director of Thoracic Surgical Oncology and Thoracic Surgery Research at St. Luke’s and Roosevelt Hospitals, also Co-Director of the Mount Sinai Health System’s Airway Center of New York. 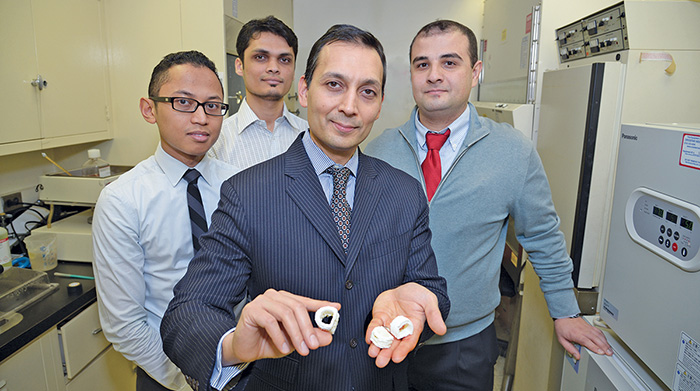 This case differs from, although it is not entirely unrelated to another famous 3D printed-related tracheotomy case last year, where a splint 3D printed out of biocompatible materials was implanted in baby Kaiba Gionfriddo when he was just a few months old, to treat a severe form of tracheobronchomalacia (which caused a tracheal collapse). The trachea engineered by Dr. Bhora and his team, on the other hand, was bioprinted using stem cell cultures. That means that, just like a transplanted organ, it can grow with the person who receives it, with the added benefit of 100% compatibility. In other words it would be the first artificial bioprinted organ.

“Researchers around the world have begun using new 3D bioprinting technology to create structures such as ears and heart valves from living tissue,” said Dr. Bhora, who estimates that within the next two to three years he will know whether the use of 3D manufacturing technology is truly viable in creating cartilaginous tissues such as a trachea. “Our strength,” he added, “lies in that fact that we are surgeons and clinicians first; and our research is done always with a mind to use new scientific advances to improve the lives of patients.”

This procedure was tested on a baby pig about three months ago. Since then the piglet has tripled in weight and doubled in size. It appears that the artificial trachea is able to keep up with the growth and, if confirmed, that would be a good indication of the potential that this type of treatment would have in paediatric care.

To create the bioprinted trachea Dr. Bhora’s team took a biological membrane and “seeded it” with a stem cell solution before “priming” the cells by adding  growth factors that transform them into cartilage precursors. The goal is to have the first 3D bioprinted, customized, biological, artificial trachea approved by the US Food And Drug Administration within three years. Coincidentally that is about the time that little Kaiba Gionfriddo’s implant will need to be replaced.