I was in the middle of writing Rachel an email when I saw an ad on the sidebar of my Gmail page. I think I had noticed that there were ads there, but had become so accustomed to them that my brain completely tuned them out. So, when I caught a glimpse of some 3D printer companies I’d never heard of selling me things in my inbox, I was a little surprised.  When I found out that the ad was for a company in Long Beach, California, about ten minutes away from my home, things started to get eerie. 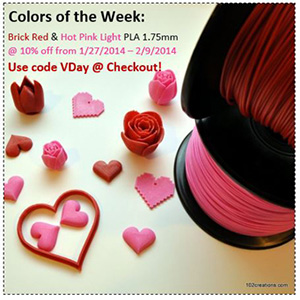 I headed over to the 102 Creations webpage, looking for a contact number. After chatting with, what I thought might be a ChatBot, I was able to get the store’s digits and give them a call, person to person. The resulting conversation was revealing. 102 Creations was started by Mila and Roy in 2013, 102 Creations is a 3D printer shop that mostly focuses on filament supply, selling 1.75mm PLA and ABS filaments in a variety of colours. They’ve also got a few different 3D objects available for purchase, as well as the 3D printed parts for a Kossle Deltabot 3D printer kit. Roy, an IT guy, after ordering his first PrintrBot, became enthralled by the technology, eventually ordering two more. He convinced Mila to join him in starting their own 3D printing-related company local to the Southern California area.

Mila explained that a local filament connection could provide the growing LA maker community with a quick supply of feedstock when needed, so they partnered with a filament manufacturer to keep them in high supply. Because the store is still so new, they’re still in the business of making connections. They spoke with a number of retailers at the 3D Printer World Expo this weekend and the LA Makerspace. Meanwhile, back in Long Beach, 102 Creations is looking to hook up with the Long Beach Makers Association. The group has just awoken from its holiday slumber, so they’ve just started kicking off meetings for the year. As soon as a 3D printing meet-up comes around, Roy and Mila plan to hit up the group to ensure that they have local access to quality filaments.

Though the pair are new to the industry, they hope that they’re networking and passion will help them reach a couple of milestones over the next year. Not only do they hope to extend their product offerings to include more diverse filaments, but they even hope to establish a brick-n-mortar store, which would make them the first 3D printing shop in the South Bay of Los Angeles, right down the block from me! Then, when they’ve established themselves in the area, they want to extend their products to include 3D printers and possibly some version of an FFF pen, like the 3Doodler.

I wish them luck in starting up their business, not just because they’re local, but because they seem like genuinely nice people, passionate about the field. Perhaps it was serendipity that displayed an ad for the Long Beach filament supplier next to my inbox.  Or, more likely, their Google ad campaign is paying off.