Since the 3D printing boom that began in 2012, many have wondered just when, if ever, Apple would get into the 3D printing space. For the most part, it was agreed that the technology just wasn’t quite ready for the tech giant, who normally likes their products so user friendly and polished that even my parents can use them. Still, Apple filed a few patents here and there to suggest that maybe they were exploring 3D printing behind closed doors. Now that the Apple of Silicon Valley’s eye is prepping for the release of its own AR device, the 3D sensing iPhone 7 Plus, and is publicly toying with the idea of VR, it is with renewed interest that we ask, will Apple ever get into 3D printing? It turns out that they already have, at least in Europe. 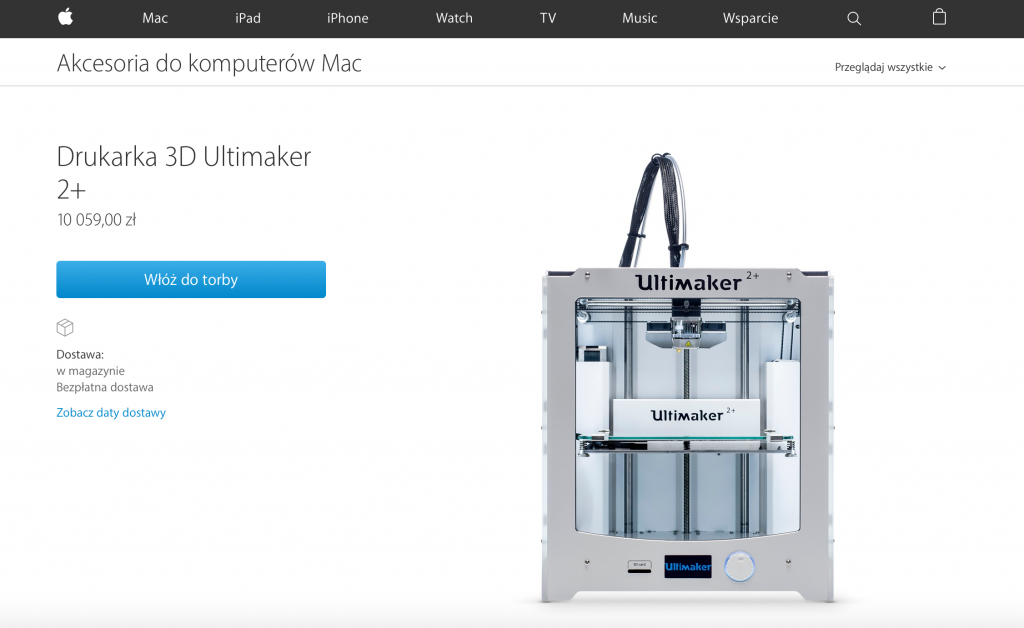 3D Printing Center reports that Ultimaker 2+ 3D printers are available for purchase online from Apple stores in “Austria, Czech Republic, Denmark, Finland, Spain, Norway, Poland, Portugal, Switzerland, Sweden, Italy and in Hungary.” Update 4/13/2016: I’ve just been informed by Ultimaker that they are being sold in several more countries, as well: Belgium, the Netherlands, Luxembourg, France, Germany, Ireland, and the United Kingdom. These nations actually came first, before Ultimaker was added to Apple’s online stores for the countries in the first list. That’s a total of 19 stores for those who are counting. Interestingly, a notoriously closed source company has chosen one of the most popular open source 3D printers on the market to sell in their online store. Given the popularity of the Ultimaker brand in Europe and the clean aesthetic, it seems like an obvious choice, if Apple is going to choose to sell 3D printers.

Of course, selling 3D printers is one thing and an Apple-made 3D printer is a completely different one. Apple has already sold the Mattel-branded VR headset online, hinting at an embrace of VR, but they have yet to sell their own device. My guess is that, when Apple does unveil the iPhone 7 Plus this September, they will need partners for apps related to 3D printing. The iPhone 7 Plus will allow users to scan objects for 3D printing on a separately purchased Ultimaker 2+.