Last summer, MyMiniFactory began the MP5 Project, an open source endeavor to unite the 3D printing industry under a holistic approach to design, slicing, and printing. And, while we hadn’t heard much about the project since July, at least from a PR standpoint, MP5 has been chugging along steadily. Today, the first results have been announced as MyMiniFactory’s new WeDesign.Live, “the world’s first live collaborative 3D design platform.” I had a chance to speak with Sylvain Preumont, Executive Chairman of MyMiniFactory, to see the platform in action, as well as understand the motivation behind a tool that really could have a revolutionary impact on the world of 3D design.

In developing WeDesign.Live, MyMiniFactory was inspired by the huge progress made possible by the open source movement in other arenas. Due to the ability to share code freely, programmers have been able to drive the evolution of software projects quickly and in ways that might not have been possible when implementing a closed source approach. For that reason, WeDesign.Live is an open source and collaborative platform. Designers can create 3D models alone or with others around the world in real time. Or, if they’d prefer to, users can simply sit back and watch others design live, as well. And, because this cloud-based software features an open, integrated slicer, models are completely 3D printable.

Previously, collaboration on 3D models has been extremely limited, Preumont tells me. “Designers have had to choose from closed source programs that are all more complicated and difficult to use,” Preumont tells me. “And, very often, if you want to collaborate, the only way you can do that is that you create your design, then you save it and send that file to someone and that someone needs to have the exact same software, probably in the same version, load it, collaborate with your file (not really with you), and then, when they’re done, they save it and they send it back to you. And, then, when you work on it, maybe a couple of hours or days later, you open it and realize that it wasn’t even really what you intended.”

To tackle this, WeDesign.Live took a similar approach to Google, when Google Docs (now Drive) was released.  In the same way that Google Drive introduced word processing and spreadsheet software that went beyond the need to download and convert files before sharing them with others, WeDesign.Live allows for instantaneous, cloud collaboration, without issues of software and file compatibility.  As a result, multiple users can collaborate on a project with instant feedback, increasing efficiency and fluidity in the design process. 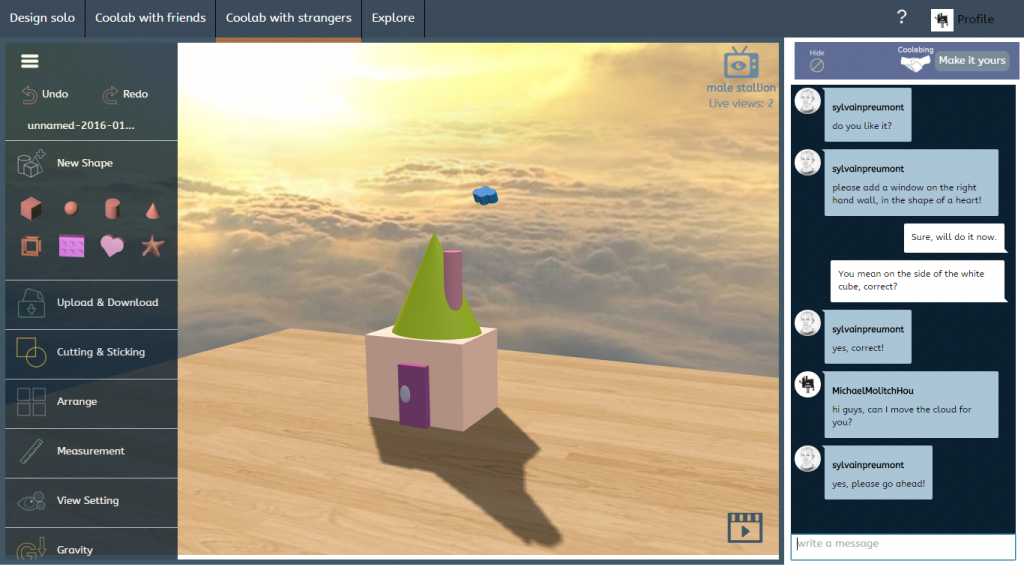 WeDesign.Live is meant to be a holistic approach to 3D design for 3D printing, not only in terms of tackling everything from compression to slicing on the software side of things, but by focusing on the “we” of the human collective.  Preumont contrasted the outmoded “i” approach of the Internet and “you” of social media with the dawning “we” of the open source era. “Starting maybe around fifteen years ago, there was the time of ‘I’, ‘me’, and ‘myself’ with the iPhone, the iPad, and ‘i’ everything,” Preumont says. “Then, there was a nice time for ‘you’, with sites like YouTube.  ‘You’ is nicer than ‘I’, but, today, we think it is time for ‘we’. You and me and us together, we are more powerful than just me and you alone. So, we understand that the new generation is all about collaboration with the open source movement, crowdfunding, and co-working spaces. We thought that it needs to be the same way with CAD design.”

The “we” of WeDesign is also implemented in terms of user friendliness and accessibility.  Modeling with the platform relies on working with a library of primitives through intuitive cutting, extruding, scaling, joining and more.  These objects can then be fused together to create a single 3D printable file.  And, unlike the vast majority of 3D modeling software out there, WeDesign.Live is completely free, making it not just accessible in terms of user interface, but in terms of cost as well.

“The model for 3D design I described hasn’t changed in the last decade or so,” Preumont continues. “And there’s a reason for that. The software is brought to you by very large companies – mainly two of them: Autodesk and Dassault Systèmes. It is really a duopoly where those two companies compete with each other and don’t let anyone else in the field. And they make a lot of profit from this situation. As you probably know, SOLIDWORKS is like $4,000 a license, plus over $1,000 a year for maintenance. So, that’s what we’re looking at. We’re looking to make 3D design, more affordable, and easier to use.”

To achieve this, a single file format embedded with all of the necessary features is required, something that Microsoft claims to be pursuing with the .3MF format and the 3MF Consortium.  However, as has been previously suggested, it’s possible that both of these were created in order to maintain control over 3D printing, rather than to democratize it.  In contrast, the MyMiniFactory Executive Chairman and his team are inspired by projects like Android and Linux.  He believes that being open source is essential to, not just creating access, but evolving the design software because, by maintaining an open source philosophy, anyone can modify and improve WeDesign.Live.

“I really hope they do modify WeDesign,” Preumont explains. “We hope that people will come and implement features and functions and develop for it. We have a great team here, but we believe there are many people around the world that are going to be able to help. With the power of ‘we’, with the power of the multitude, we should be able to bring that to a large, exciting level. If you look at the last twenty or thirty years, we’ve been in the era of software developers and server developers, due in part to the open source spirit and community. I do believe that the next couple of decades will be the era of design as a whole and 3D design, in particular, just like the last decades have been for software and server developers.”

With a core team of expert developers working with the global community, WeDesign.Live really does seem, to me, to be the next big thing in 3D modeling.  With a 3D replay feature, 3D modeling educators can share with the world how they crafted a 3D object from every angle, while the ability to design with specific friends or the community more generally offers collaboration unprecedented in the 3D design industry, at least when it comes to easy-to-use, open source solutions.  Having caught glimpses of the platform through my Skype chat with Preumont, I believe that WeDesign.Live really might, as their newsletter suggests, “[embrace] the power of ‘We”: frictionless collaboration for learning, playing and building complex and decentralised organisation.”

Potential alpha testers are invited to head to the WeDesign.Live site to sign up for an invite before the open beta version is released in March, 2016.  To keep up with the progress of the project, you can follow WeDesign on Twitter or email the team via [email protected]

Correction 1/20/16: This article previously described WeDesign as the “first ever live, co-design 3D modeling platform”, when it should have included the phrase “open source” as well. There are other live, co-design platforms, like OnShape, Clara.io, and Lagoa, as readers have pointed out, but these are not open source, as far as I know.