If you ask most teenagers how their day at school was, you’ll probably hear a guttural one-syllable noise coupled with an enormous eye roll skywards indicating their response.  As most of their physical energy is dedicated to secreting hormones, this is all they can muster to communicate that “school is lame.” But technological progress may go a long way to making school un-lame because, according to a report titled “Technology Outlook for STEM+ Education 2013-2018: An NMC Horizon Project Sector Analysis”, between now and 2018, STEM+ education is going to be shaken up.  And one of the key technologies that will do the shaking is 3D printing. 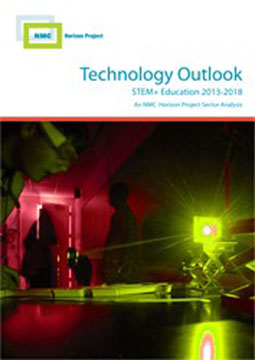 The report was put out through a collaboration between several different technological education institutions – the New Media Consortium (NMC), the Centro Superior para la Enseñanza Virtual (CSEV), Departamento de Ingeniería Eléctrica, Electrónica y de Control at the Universidad Nacional de Educación a Distancia (UNED), and the Institute of Electrical and Electronics Engineers Education Society (IEEE) – and it outlines a number of tech developments that will alter the educational sector in the next year, two to three years, and four to five years.  The CEO of the New Media Consortium, Dr. Larry Johnson, believes that such reports, tailored specifically to education, can help teachers prepare for the future, saying, “By examining these technologies through a STEM+ lens, the report will help educators to think more critically about how emerging technology can engage learners in the sciences, engineering and mathematics and push the boundaries on how they relate to the world around them.”

After the first set of technologies that will change the educational landscape, including mobile and online learning, 3D printing is reported to significantly enhance STEM+ education in the next two to three years.  According to the report, 3D printing can give classrooms access to materials, such as models for “animal anatomies and toxic materials”, that they would previously be unable to get their hands on.  Additive manufacturing can also be used to develop learning exercises that involve the use of the 3D printer itself for the creation of designs and prototypes.  The report also includes current examples of the technology as used in the classroom, such as the 3D printed microscope covered yesterday, and includes some guesses as to the future of AM, including 4D printing.

Many of our regular readers may not benefit from the 3D printing applications discussed in the report, but may learn a thing or two about the other technologies discussed.  In four to five years, for instance, the report details the Internet of Things and how networking physical objects could allow for better recording of data in research labs. The growth of immersive learning environments over the next two to three years will make it possible to study objects or perform virtual surgeries in simulated environments.  Also discussed are wearable devices, flexible displays and machine learning, which can give anyone who lacks an understanding of the potential for such technologies a brief overview of how they’ll improve the classroom experience.  You can watch a video discussing the various topics covered in the report below:

What the report doesn’t consider, on the other hand, is the funding issues that public schools (at least in the US) face, making it difficult to get their hands on many of the technologies discussed in the report without serious legislation reform.  The report, by the very nature of its focus, neglects the non-technological improvements that could be made in the classroom, such as an emphasis on critical thinking, something that can be achieved by better literary and arts programs as well as science curricula. Though I have reservations about the motivations behind the New Media Consortium due to their corporate partners, which include Apple, Adobe and the much reviled Pearson PLC, the report does give a broad outline of what technologies teachers should learn about and utilize to the best of their abilities.  For educators that are unaware of the potential for 3D printing in teaching STEM+ (the + stands for communication and digital media technologies), such a report will expose them to a tech that could provide some much needed hands-on learning to the classroom.  Judge for yourself by downloading the “Technology Outlook for STEM+ Education 2013-2018: An NMC Horizon Project Sector Analysis” report here.