In the near future, you may be able to take out your smartphone, attach your 3D printed microscope adapter, and take a look at the contents of — well, pretty much anything really, including bacteria and viruses that may be bugging you. Aydogan Ozcan, along with his team of UCLA researchers, has just published a study in ACS Nano that details a method for examining nanoparticles with a smartphone using a 3D printer, a colour filter, a lens and a laser diode.  Here’s the device now: 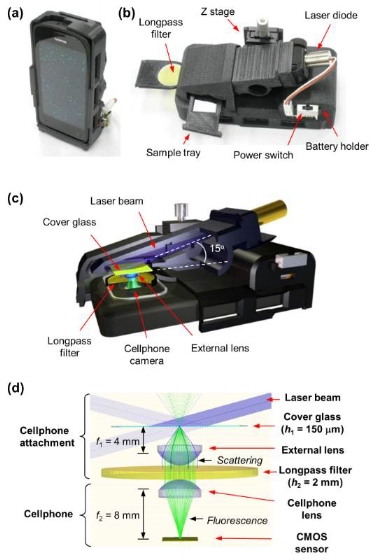 Image and description from UCLA Newsroom: “Photographs and schematics of our cell- phone-based fluorescence microscope. The screen of the cell phone in (a) shows the fluorescence image of 1 μm diameter green fluorescent beads. A back view of the same cell phone attachment is shown in (b), and its schematic illustration is provided in (c). Ray-tracing diagram of the cell phone microscope is shown in (d), where excitation and scattered beams are indicated with solid blue rays, while the fluorescent emission is highlighted with solid green rays.”

After designing it in Autodesk Inventor, the team printed the casing on a Dimension Elite 3D printer from Stratasys. They attached their blue laser diode (bought from eBay), their AAA batteries, and a variety of more sciencey and slightly less accessible parts to a Nokia[1] phone to create an affordable and mobile tool for field-based microscopy. Dr Ozcan explained the potential use for such a device, saying,

This cellphone-based imaging platform could be used for specific and sensitive detection of sub-wavelength objects, including bacteria and viruses and therefore could enable the practice of nanotechnology and biomedical testing in field settings and even in remote and resource-limited environments. These results also constitute the first time that single nanoparticles and viruses have been detected using a cellphone-based, field-portable imaging system.

The problem with smartphone-based microscopes in the past stemmed from the weakness of the fluorescent light used and the resulting signal-to-noise ratio. Incorporating the laser diode and filter into their design cancelled out some of this noise and made it possible to catch the nanoparticles. The researchers demonstrated the successful use of the device in the detection of human cytomegaloviruses (HCMV), a significant risk for people with compromised immune systems, such as infants, transplant patients and those suffering from HIV.  The findings were, then, validated with an electron microscope. As the UCLA Newsroom explains, “A single HCMV particle measures about 150–300 nanometers; a human hair is roughly 100,000 nanometers thick.”  In addition to the HCMV, they were also able to capture nanoparticles much smaller, in the 90-100 nanometer range.

This isn’t the first time that Dr. Ozcan’s been invading people’s privacy with his cell phone.  Previously, the doctor and his team developed a system for detecting Albumin, a protein used to measure kidney function, in urine and a smartphone device for finding allergens in food.  My hope is that the .stl for his 3D-printed microscope will someday make it onto Thingiverse, as part of Michigan Tech’s Open Source Optics Library, and that all of his equipment will be made available to the public because, as Ozcan says himself, regarding the albumin tester, “This device provides an extremely convenient platform for chronic patients at home or in remote locations where cell phones work.”

[1] The research was funded by Nokia, the Army Research Office, the National Science Foundation, the National Institutes of Health, the Office of Naval Research, and the Presidential Early Career Award for Scientists and Engineers.