Natural Machines co-founder and CEO, Emilio Sepulveda, delivered a short presentation about the Foodini at Marylebone’s Carousel bar and restaurant,  a venue transformed for the week into an Insect Bar.

Guests enjoyed cocktails made from vodka, peach juice and a bug infused concoction: all garnished with a roasted cricket. Dotted around the bar were further gastronomic delights such as samples of pasta made from Thai crickets by Bugsolutely, more roasted insects and my favourite, a Thai street dish called miang. Created by Eat Grub’s Seb Holmes, the toasted coconut, ginger, lime and chili dish also contained a healthy helping of buffalo worms, several bowls of which wriggled nearby.

3D printing with insects not included

Sepulveda did not mention insects directly in his presentation, nor afterwards in our conversation. Instead the CEO explained how Natural Machines first machine is a step along the road to making 3D printers in the kitchen as common as the microwave. However, Sepulveda was keen to add that while a microwave may only have limited use in a kitchen a 3D printer would be a much more useful device. 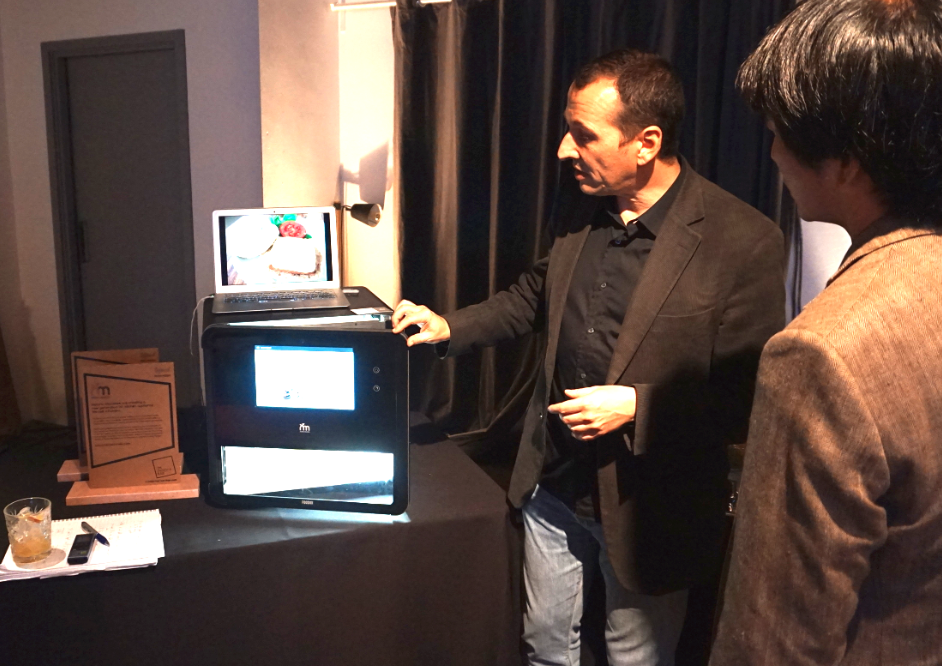 Applications for Foodini currently are targeted towards the professional market. The Foodini is in use by several restaurants in Barcelona and several chefs have embraced the technology. The machine has 5 stainless steel cartridges which can be fitted with nozzles of varying size, depending upon their contents.

Each cartridge takes 100 grams of ingredient, giving the machine a capacity to print a meal of up to half a kilo. Sepulveda believes that 3D printing ingredients such as vegetables into novel shapes – one slide showed a dinosaur – is a way to encourage children to eat healthier meals.

Although the Foodini was not printing during my time at the event the CEO did show a number of slides of the finished meals. These included one showing a mini pizza. This particular item took somewhere between 5 and 10 minutes to print. Additional time would also be required to cook the pizza, something the current iteration of the Foodini cannot do but is planned further along the development path.

Sepulveda explained his company are still refining the device and also offer consultancy services to enable customers to get full use from the machine, which currently is only available on a limited release. In February next year the CEO explained that the Foodini will be made available for wider audience when the second batch of machines ships. Current plans are for a $2,000 price tag at that point.

In the long term Sepulveda says he expects 3D printers to become, “a common kitchen appliance in the next 10 years.” If you have an appetite for more 3D printed food why not read about the 3DigitalCooks here?

All photos by the author, Michael Petch.