What is 3D Printing Art Really?

The occasion of international sculpture day serves as good excuse to survey how 3D printing has influenced the fine arts and assess whether the technology’s potential to “disrupt” has been fully realized. I haven’t seen this discussed elsewhere, but I don’t think it is a secret that the art world is perhaps the one realm of influence where 3D printing is actually maligned. 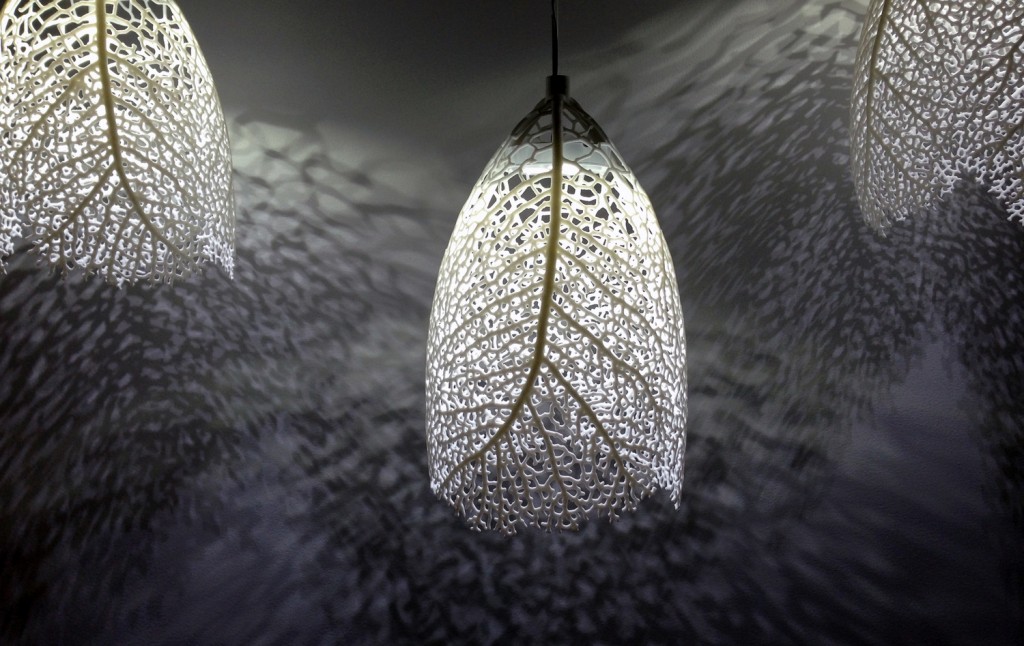 Just search google for images of “3d printing art” and you will understand why the technology has a stigma for producing artwork that is rather generic, closer to design than art, so closely linked to the technology it is more like a proof of concept. Sure, the novelty of objects showcasing what can be done with a 3D printer are interesting, but there’s not a lot being said otherwise. While these artists shamelessly ride the hype cycle, other artists have deliberately avoided to mention their use of 3D printing to make their work. 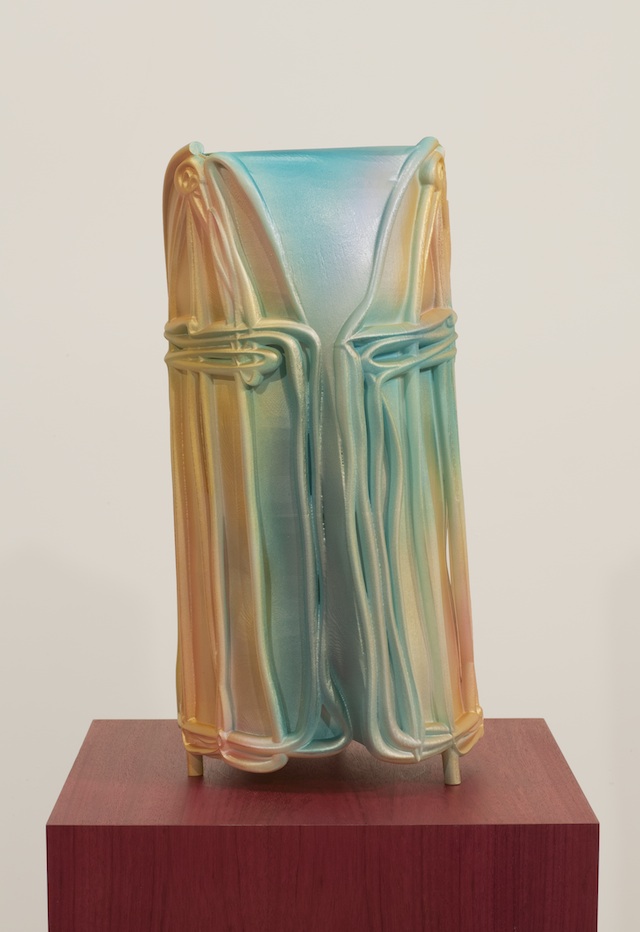 At CES 2014 3D printing hype seemed to explode. In the same year, artist Jacolby Satterwhite was blowing up on the art scene and dabbling with 3D printing technology, unbeknownst to gallery goers. His solo show at an LA art gallery exhibited several sculptures like the one pictured above. Despite the fact that his art practice is heavily tied to digital media and the Internet, Satterwhite does not mention his use of 3D printing to produce his work­­ the only hint is found in the work’s listing of material: nylon.

It’s an obvious example of an artist hoping to preserve the otherworldly allure of their work, which is common practice in the art world. An audience wants to believe an artist brought their idea into being in some way human that a 3D printer can’t replicate, but the cold reality is producing an object from a CAD model is much more efficient than handbuilding it with clay or carved foam. It’s hard to know Satterwhite’s actual intention, but he didn’t forget to mention 3D printing and this says a lot about the sometimes conflicted relationship between art and technology.

Acknowledging the digital fabrication process is controversial because words like authentic and provenance reign supreme in the art world. With 3D printing an artist’s ideas are found manifest in the object, but without a single mark made by the artist’s hand. It begs a

critical question about digitally fabricated art of any sort moving forward. If the artist’s only involvement with the physical making of a sculpture is a series of mouse clicks on a CAD program, is the object still precious or pedestal worthy? 3D printing seriously challenges the value placed on a work of art’s physical connection to the artist and the aura that we believe to emanate from a one of a kind thing. 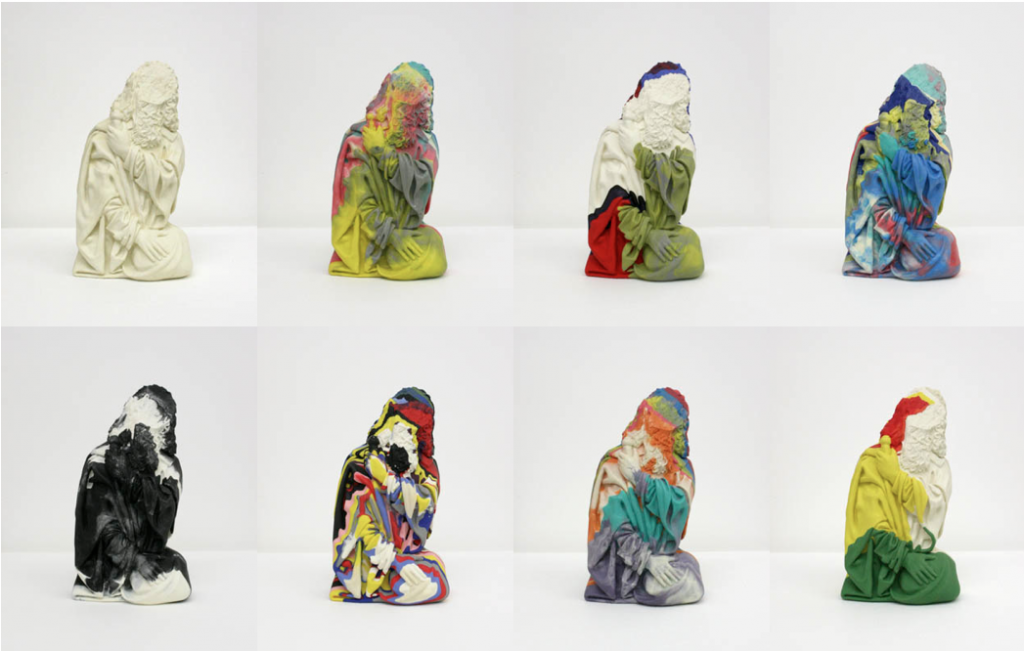 One artist who has most successfully engaged with these ideas is Oliver Laric. Work like “Icon (Utrecht)” illustrates what 3D printing does to traditional ideas about the art object. When it can be perfectly replicated and there is no perceptible difference between the original and its copies, the first copy is no more authentic than every iteration thereafter.

Technology has always served to upend artistic traditions, but it takes time. Photography did this to painting. With the camera perfectly capturing the world in 2D, painting had to become about much more than masterfully reflecting the literal appearance of things. In a similar way, 3D printing along with modeling and scanning will serve to illuminate the core nature of whatever medium it touches, whether it be sculpture or painting once again. 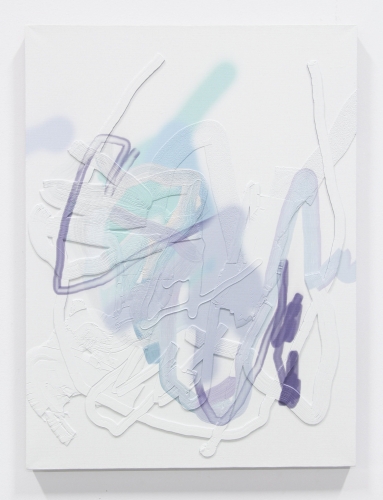 A recent show of paintings by Michael Manning used 3D printing as proof of concept of just how the medium could be transformed by the technology. His paintings offer the appearance of an individual artist’s tireless brushwork, but offered with the unsettling admission that his work is machine made. Emulating brush strokes with a 3D printer is a cold rebuttal of the magical reverence traditionalists have for the “a rtist’s hand. ” We want to believe in the details of a brushstroke is evidence of the creative genius transcending the body, but Manning’s work proves with 3D printing this is merely an illusion.

To use some 3D printing terminology, Laric and Manning have produced the first test objects in a series that will help further discussion about what 3D printing means to art. They ask the fundamental questions that apply to art in all forms: if a work of art can be made that is infinitely reproducible and totally dispossessed from human creation is it is as precious or authentic as a genuine Picasso?

There are no immediate answers to these questions and there is much more to 3D printing that is worth exploring as an artist­­ not just how it will change the art world, but the world at large. Recently, the demand for artistic expression of all things 3D printing was vocalized by artists Morehshin Allahyari & Daniel Rourke in their formal creation of the additivist movement, as explained in The 3D Addivitist Manifesto.

“T he 3D Additivist Manifesto calls creators and thinkers to action around a technology filled with hope and promise: the 3D printer. By considering this technology as a potential force for good, bad, and o therwise, we aim to disrupt binary thinking entirely, drawing together makers and thinkers invested in the idea of real, radical, change.”

Found in the manifesto is a project proposal called the Additivist Cookbook. Deliberately far reaching to the point of being inchoate, the cookbook will serve as collection of theories, personal responses, and physical files that explore all the dreams we conjure when thinking about the potential of 3D printing, from fantastical ideas about the future to grounded observation about the 3D printer, the machine itself.

Additivism as presented in the manifesto advocates to not just consider 3D printing as a tool but also as a force of influence in the world that is so far reaching its potential for artistic inspiration is limitless. It suggests that 3D printing art doesn’t even have to be 3D printed as long as it gives creative expression to how the technology is reshaping the world around us. The 3D printing industry should watch for more developments from the additivist movement and consider participating even if one hasn’t proclaimed themselves an artist.

It is clear 3D printed art made up of fractal geometries, decimated polygons, and voronoi­patterned forms will not be the norm for much longer. It does remain to be seen whether the fine arts community will fully embrace 3D printing technology as more than merely a trendy way of making something. Only when it is more common place, as ubiquitous as the hype has suggested, can we begin to discuss to what extent 3D printing is influencing the fine arts and culture at large. For now, the conversation has just begun.

Do you think 3D Printing art will also change the laws of art ?

Robert Cicetti is a freelance writer, artist, and tinkerer. He spends way too much time in his NYC apartment working with machines and screens. As co-founder of MATTERLAB, Robert developed the first hemp and tagua 3D printing materials. He is also an obsessive builder of deltabots.