Just about two years ago, the professional services firm PricewaterhouseCoopers (PwC) published a study entitled “Disruptive Manufacturing Innovations Survey”, which detailed the present and expected future use of 3D printing technology by US manufacturers. Now, PwC is revisiting that study to see where additive manufacturing currently stands. Through all of the market hype over the last few years, PwC’s new study seems to show 3D printing to be taking a turn towards maturation. The newest study, entitled “3D Printing comes of age in US industrial manufacturing”, focuses on three main factors that show some vast changes in recent 3D printing trends.

The first, showcases that there is more making and less tinkering happening in the industry, in fact, 51% of US manufacturers have implemented 3D printing to their process in one way or another, while the amount of experimenting on how it can be applied has dropped down 17% (compared to 29% in the study from two years prior). The second factor of the study is focused on the increased expectations for high-volume production via 3D printing, 52% of the the manufacturers involved in the study expect more massive production capabilities in the next three to five years. Lastly, is the question of what the most disruptive effect of 3D printing technology will hurt the most, which was split between having to restructure supply chains (22%) and threatening IP (22%).

Though there are a lot of other areas within the study that prove that 3D printing technology seems to be ‘growing up’, there still seems to be some minute disappointment . For example, two years ago, 57% of the manufacturers participating in the study expected 3D printing technology to be used more for after-market parts in the next three to five years, which dropped to about 52% in the latest study. PwC also showed another drop in expectations for creating obsolete parts through 3D printing, which went from 70% to 64% over the two year gap between their last study. 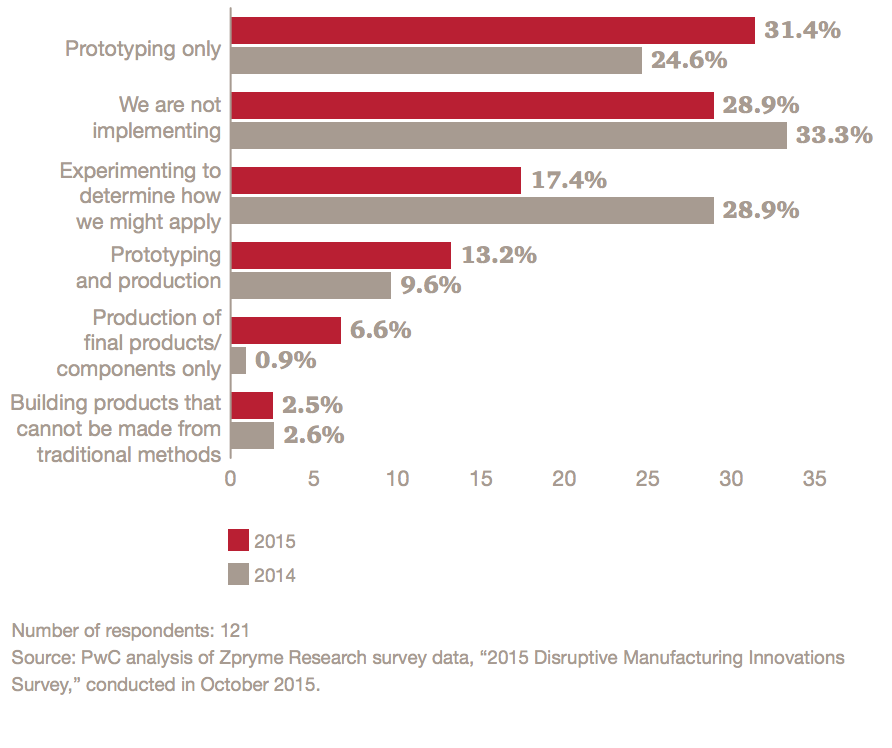 Overall, the PwC report is foretelling a bright path for 3D printing technology within the manufacturing world. The amount of manufacturers not implementing 3D printing technology continues to drop, while use for prototyping and production parts is on the rise. Still, the dreams of using it for mass production and after-market parts seems to be falling down to reality, while more manufacturers feel as if the biggest barrier preventing the full adaptation of 3D printing is the high price point. Although much of the exciting industry news is centered around desktop 3D printing innovations, PwC showcases a future when the manufacturing sector will be the biggest innovators.

“Not surprisingly, manufacturers are still very much at the vanguard of 3D printing adoption and innovation,” PwC reported in the latest study. “While desktop printers and entrepreneurs may grab the headlines, manufacturers are also pushing 3D printing to its limits and are prime movers in ushering the technology to higher maturity levels.”