3D printing has once again proven vital in the the preparation stages of a life saving surgery, as a five year old from Spain named Marc faced a tumor that doctors deemed risky to remove.  Since the age of one, Marc has been diagnosed with a neuroblastoma, a common form of pediatric cancer.  Normally operating on such a tumor can be relatively simple, but due to the network of blood vessels and arteries surrounding Marc’s growth, doctors at Hospital Sant Joan de Déu de Esplugues de Llobregat in Barcelona feared causing damage to his liver, kidney, and stomach.

Initially, the team made two failed attempts at operating on young Marc, but the boy’s mother, Esther, and her partner have spent the last four years waiting with hope, saying that, “los doctores no han parado nunca de buscar cosas qué hacer [the doctors never stopped looking for things to do].” And, in their quest, they found themselves turning to the new technology to better prepare them for a third procedure.  The hospital enlisted the help of the Fundación CIM de la Universidad Politécnica de Cataluña (UPC) to translate CT and MRI data into a sophisticated 3D printed model.  UPC was able to design an exact copy of the tumor and surrounding area with two distinct materials, hard plastic for the blood vessels, kidney, and spine and a soft resin for the tumor itself. 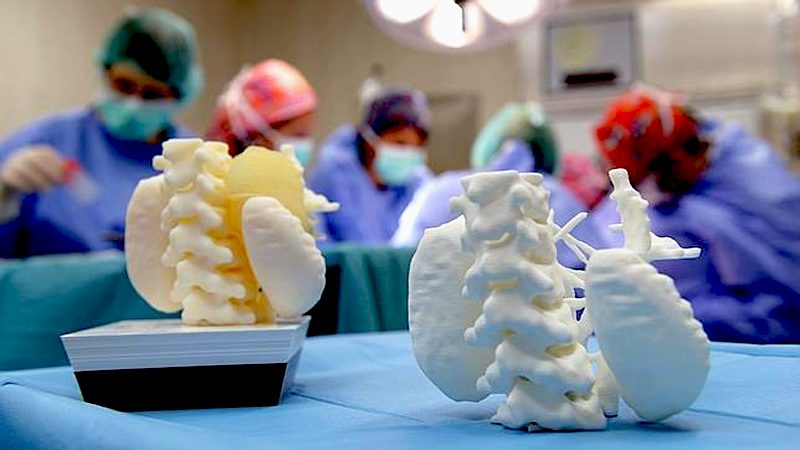 The team spent ten days practicing on the model, before finally operating on Marc once again, performing a two-part surgery, and successfully removing the tumor.   Lucas Krauel, the lead surgeon on the operation, explained how 3D printing was able to make the surgery a success, saying, “La impresión nos ha permitido poder “jugar” con el tumor, si se puede decir así, y verlo bien [The 3D print allowed us to ‘play’ with the tumor, you could say, and see it well],” adding that this surgery, “solo es un primer paso de una tecnología que puede tener muchas aplicaciones futuras y que puede llegar a ser más real [is only the first step for a technology that can have many future applications and become more real].”

The hospital has seen about 35 cases like Marcs over the past ten years, but, now that Marc’s tumor has been successfully removed and he will longer need further surgeries, there may be hope for future such operations.  This story, and others like it, have proven that, as directly useful as CT and MRI scans are, tangible 3D models can make a life-saving difference.