Free Your 3D Printer from Slicers and Print with Project Silkworm

Skip your Gcode slicer completely and print directly from Rhino3D. Why? Because you’ll be freed from the constraints of quadratic code to experience the organic nature of silkworm!

Project Silkworm is an add-on for 3D modelling software Rhino3D and its popular Grasshopper plug-in. Instead of relying on the layer-by-layer, robotic operations dictated by a slicing program, Silkworm allows you to more directly control the way that your 3D printer moves and extrudes.  You can tell your printer to extrude more filament here, less filament there, and vary its path along the X,Y and Z axis based on your creative insight, leading to such ornately layered objects as these: 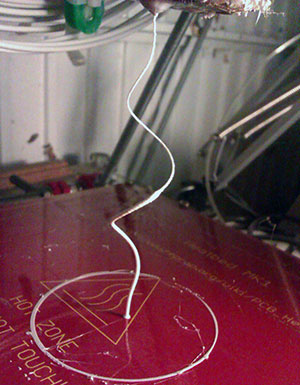 The software is described by its creator as follows: “Silkworm is a plugin that translates Grasshopper and Rhino geometry into GCode for 3d printing. Silkworm allows for the complete and intuitive manipulation of the printer GCode, enabling novel printed material properties to be specified by non-solid geometry and techniques of digital craft.”

Silkworm places your printing abilities somewhere between the freeform nature of a 3D printing pen and the robotic, point-by-point printing process elicited from slicing programs.  Using the power of your CAD software, the plug-in can allow you to make such objects as “a contour pattern to describe a material grain,” “a continuous unsupported 3d spiral with low extrusion speeds”, “a layered 3d pattern weave”, “a spiral with a range of speeds and flow values,” as well as “mix solid and non-solid geometry”  To see how “a continuous unsupported 3d spiral” might be printed “with low extrusion speeds” (as pictured above), watch this video:

Here’s a brief tutorial video from Project Silkworm that goes into a bit more depth about how it works:

I’ve been having trouble accessing the site, either due to the FCC’s revolving door relationship with Cable-Telecoms or a possible update to the Silkworm site, but you may be able to download it here.  You’ll need Rhino3D and Windows and, to get the full benefits out of Project Silkworm, a 3D printer.

0 0 0 0
More on this topicThe City of Portland Oregon Faces Fiscal Crisis Due to Purchase of a 3D Printer
More on this topicIt All Pours Out: Missouri High School Seniors Solve Ketchup’s First Drop with 3D Printing