What is a 3D Printed Monkey Selfie?

The phrase “3D printed monkey selfie” would have made no sense thirty years ago and even makes little sense today, but, with a bit of context we can decipher this 21st century lingo to reveal a series of events that could have only taken place in the absurd period of time in which we currently live. 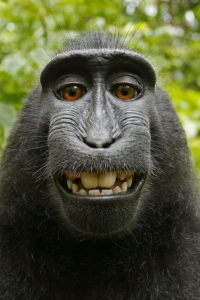 In 2011, British photographer David Slater traveled to Indonesia to snap a perfect photo of the crested black macaque, when a female macaque snatched his SLR and went running off into the jungle.  Upon recovering the camera, Slater noticed that the monkey had taken, among the blurry shots of the forest floor and canopy, some perfectly crisp self-portraits.  The photos subsequently made Slater famous and, when the blog TechDirt published a post asking who owned the copyright to the photo, Slater or the macaque, Slater’s representative, Caters News, filed a take-down request, claiming that the blog was violating the photographer’s copyright on the photo.  While Slater continued to fight for his right to royalties, any memory of the monkey or the copyright battle faded from the collective consciousness.

Three years later, the macaque resurfaced in the zeitgeist when Wikimedia refused to remove the photographs from the Wikimedia Commons, arguing that the photo did not belong to Slater, but belonged to the public, as the photographer had not been the one to take the picture.  By then, however, the word “selfie” had made its way into the lexicon, officially entered into Wikipedia on July 2, 2013.  The photo was no longer a “self-portrait”, but had become a “selfie”.  As the U.S. Copyright Office published a 1,222 page report on the subject and came to the conclusion that “a photograph taken by a monkey” was unprotected intellectual property, the “monkey selfie” had already gone viral.

At this time in history, 3D printing had coincidentally entered the collective consciousness at about the same time as had the concept of a “selfie” and an “Internet meme”.  The technology of 3D printing had been around since the 80’s, but, after important patents around FDM 3D printing expired in 2009, desktop 3D printer manufacturers had begun to flourish and the strange process of 3D printing slowly took hold in the collective mind.  The brand MakerBot soon became synonymous with 3D printing and, when a “liberty” loving law student in Texas 3D printed a gun (but not the first), people soon worried that anyone could 3D print a gun on their MakerBot Replicator.  This last incident made the majority of the public aware of the technology.

It’s at this point that the phrase “3D printed monkey selfie” begins to make sense.  As Internet memes proliferate on the Internet, 3D designers have started to design 3D printable versions of these memes, partially pushed by CGtrader’s 3D Printed Meme contest and partially because, well, why wouldn’t they use the most hyped technology to produce the Internet’s most hyped symbols?

And, so we’re left with the 3D printed monkey selfie, a full-color replica of that crested black macaque, designed by Pete Rossdale and available for purchase on his Shapeways store for about $15.  But we’re still left without answers.  Who owns the 3D printed image? Rossdale? Slater? Certainly not the monkey, according to the U.S. Copyright Office. Why not the monkey? And if we’re all connected by atoms and by simply sharing the same environment, how can anyone own anything in the first place?  If my environment and genes determine who I am as an organism, what self do I have to take a selfie of?

Now that the phrase is contextualized, I wonder if it makes anymore sense than it previously did. 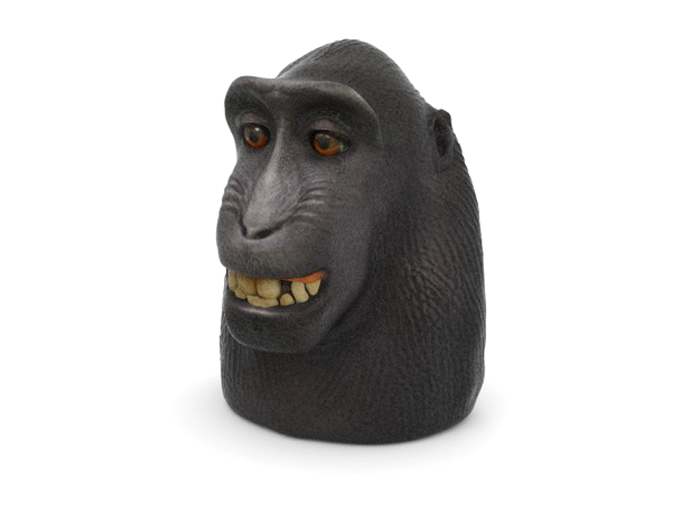