The results are in for CGTrader’s 3D printed meme contest! The contest saw a total of 211 3D printable meme models. I’m not one for netspeak , so, to quote CGTrader, “Such much WOW!” Here are some of the winners and some of the runner ups.

The winner of the Best Meme 3D Printable Model, if you’ve been following 3D printed memes, is of no surprise. Ryan Kittleson, who we had a chance to meet at Inside 3D Printing New York, is one of the original meme modellers. He won for his model of the self portrait of Joseph Ducreux. The French artist is known for the most badass self portraits of the 18th Century. Kittleson gets all of the following for winning the contest: “300 USD from CGTrader, 200 USD gift card to shop on Sculpteo, promotional features of 3D printed design on Mashable, 100 USD gift card to shop on Protoparadigm, filaments from 3D 2Print and a CGTrader T-shirt.” 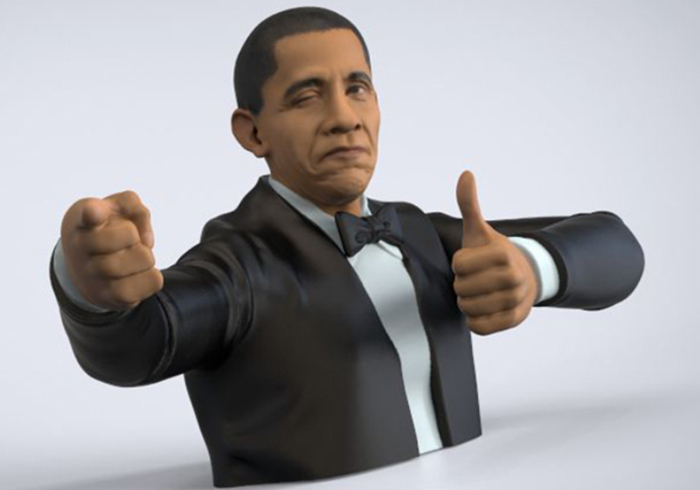 The runners up for this category were Manuel Poehlau’s Obama Approves! and Good Guy Greg by Felix. Both runners up receive: “40 USD gift card to shop on Protoparadigm, promotional features of 3D printed design on Mashable, filaments from M3D, filaments from Lulzbot, filaments from 3D 2Print, 3D Printing your model of choice by CGTrader and a CGTrader T-shirt.” 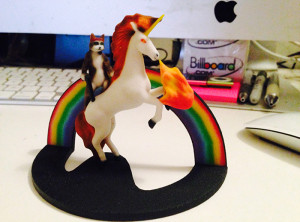 The winner of the best total portfolio of 3D printed memes overall was one user who claimed the username “The Internets” before anyone else and churned out 14 different memes. They include such wonders as Come at Me Bro Anteater, Honey Badger Doesn’t Care and Gunslinging Cat riding a Fire-breathing Laser Unicorn in Front of a Rainbow, which is sort of a symbol for the Internet as a whole. For that reason, The Internets Winner wins “a Taz 3 3D printer from Lulzbot, 200 USD gift card to shop on Sculpteo, promotional features of 3D printed design on Mashable, 100 USD gift card to shop on Protoparadigm, filaments from 3D 2Print, 300 USD from CGTrader and CGTrader T-shirt.”

Of course, there is one category of meme missing from these entries: NSFW memes. The Internet would not be complete without fountains of diarrhoea, geriatric citrus get togethers and gaping buttholes . Despite the wonderful fabrications submitted to the contest, I am deeply ashamed that no one submitted what might be the Internet’s original meme. If it weren’t for Goatse (SFW), I would not be the desensitized ball of psychological trauma that I am today. At once a disturbing reminder of the fact that reality is an actual thing that is happening to me and a lifelong friend, that image is, in my mind, the only true meme.

For that reason, I will personally award $100 to the person who designs the best printable Goatse that I can place on my bookshelf, alongside photos of family members and loved ones. $50 for the best Lemon Party and $25 for Tub Girl. And $25 to the person who can design the best 3D printable version of that cute husky with its stuffed animal (the final panel of Pun Dog) as a present for my wife, Danielle. You have from now until June 31st! Send all entries to [email protected].

[1] I won’t link to these memes because, if you don’t know them already, you probably aren’t the type to want to know them. Plus, Rachel would get mad.