We’ve covered numerous stories about 3D printed models used to prepare surgeons for the operating room.  Just last week, there were two reports about models made from CT scans to train doctors for successful tumor removal surgeries.  In those attention-grabbing stories, what’s been missing is an actual peer-reviewed clinical analysis of the this emerging practice. For that reason, doctors at the School of Medicine at Tulane University have published the results of a recent study about the efficacy of 3D printed models for patient education and surgery preparation.

In college, the point of peer-reviewed literature was often lost on me, but, since then, I’ve learned that publications like medical and scientific journals use the (much criticized) system to ensure that their studies are analyzed by fellow researchers to ensure that only rigorous authors are published.  Once exposed to the rest of the community that reads the journal, fellow scientists can analyze experiments for flaws and conduct their own to test and counter-test the work of their peers.  While there are news reports of procedures planned with 3D printed, patient-tailored anatomical models, the doctors at Tulane say, “there are no peer-reviewed manuscripts on the use of such physical models constructed to aid in the understanding and subsequent extirpation of in situ genitourinary solid organ malignancies.”

To be the first to take 3D printed models to the level of rigorous scientific study, Silberstein et al. analyzed the use of five models of kidneys created from CT scans of patients about to undergo surgery to remove “suspicious renal masses” (abnormal growths on the kidneys).  The kidney copies were 3D printed in two colors, red resin for the tumor and clear for the organ itself, using stereolithography machines.  The faux organs were handled by patients, trainees, and the surgeons performing the operation, before surgery took place.

In this first study, the researchers provide evidence that the use of 3D printed models for surgical preparation is effective, with the authors writing: 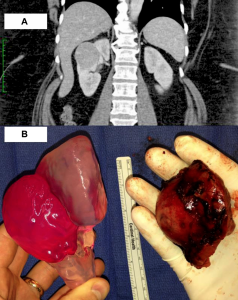 All 5 patients successfully underwent partial nephrectomy with complete excision of the suspicious renal mass... Patients and their families verbally expressed improved comprehension of the size, location, and the intended surgical intervention preoperatively. Trainees, particularly those earlier in their careers, demonstrated improved understanding of the characteristics of the tumor when questioned by surgeons. In real time, surgeons referred to the models during the operative intervention…

The authors emphasize the fact that the use of these models may direct patients towards less invasive surgeries that preserve more renal tissue, suggesting that patients may often believe that to remove suspicious masses, the entire kidney has to be removed.  By seeing the size of the tumor on the kidney, however, and holding a model in their hands could “help patients to better understand the rationale behind” removing only part of a kidney.   The researchers believe that the models tailored specifically to the patients may help them make better decisions about their health overall: 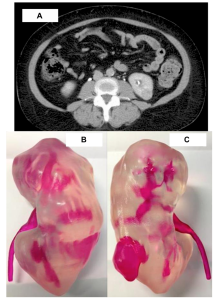 [M]any patients have limited understanding of their renal mass, need for impending surgery, and/or the importance of normal renal parenchyma preservation. Limited patient understanding may result in poor treatment choices, which can negatively affect future renal function and diminish quality of life. To help patients understand their diagnosis, practitioners may show CT images to the patient. However, these presentations may not be fully elucidative to those with limited understanding of CT interpretation. Alternatively, clinicians may draw pictures to demonstrate the lesion, but such drawings are frequently crude, 2-dimensional, and are not specific to the individual patient. Construction of individualized tactile models that can be felt and manipulated are likely to improve patients’ comprehension of both their condition and intended intervention goals.

This study is only the beginning for the team.  They are already planning future tests, involving questionnaires for patients and doctors to more accurately quantify the efficacy of these models.  The team also plans to study variables within the surgeries themselves, such as how long it takes surgeons to get to and remove a tumor.

Silberstein et al. pointed out a few drawbacks with the process used in their study.  The kidney models were converted and printed by Medical Modeling Inc, recently acquired by 3D Systems.  Unfortunately, the researchers say, “limitations from the third party additive manufacturing technique prevented constructing the lesion of interest, arteries, veins and collecting system, each in a unique color.” Moreover, the technology used by the company was limited to hard resins, when the team would have preferred soft materials that more accurately represented the actual biology of the organs being operated on.  There’s only one 3D printer that I know of that can 3D print in more than two colors and soft materials, the Connex3, and it comes from 3D Systems leading competitor, Stratasys.