The futurists were right! Soon, we will be able to monitor the various biological systems that make up our bodies, tracking the health of various organs and preventing illnesses like precogs catching criminals in The Minority Report. A team of doctors at Washington University in St. Louis has developed a 3D printed device that can predict heart attacks and treat some cardiac ailments using printed electrical components. 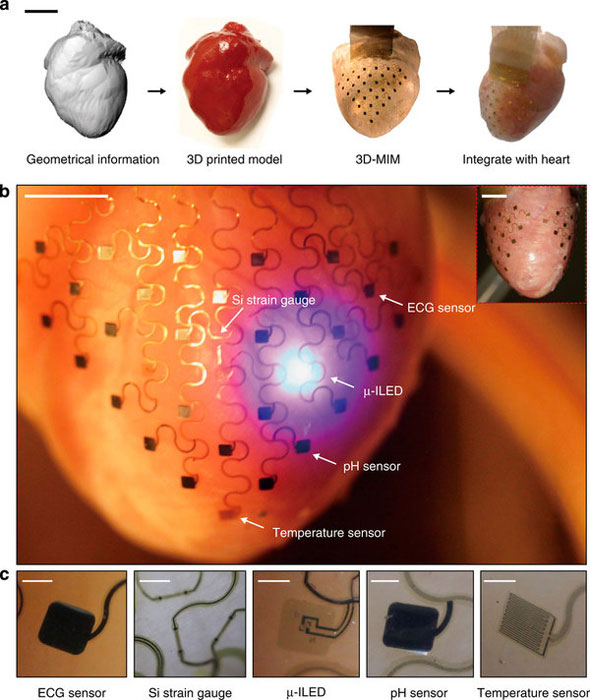 (a) Graphical depiction of the key steps in device design and fabrication. Scale bar, 2 cm. (b) Images of a representative 3D multifunctional integumentary membrane (3D-MIM) integrated on a Langendorff-perfused rabbit heart. The white arrows highlight various function elements in this system. The electronics can cover both anterior and posterior surfaces of the heart (inset). Scale bars, 6 mm. (c) Magnified views of the functional elements in conformal contact with the epicardium. The images are recorded from the back side of the devices. Scale bars, 500 μm.

Start with a CT scan of a patient’s heart. Then, 3D print a silicon membrane to be fitted around the heart’s outer layer. Print sensors onto the soft and flexible membrane to track temperature, mechanical strain and pH, as well as send tiny bursts of electricity to the heart to treat an unstable heartbeat. Go in, wrap it around the heart, and monitor the heart’s vitals or measuring troponin levels, a key diagnosis for an impending heart attack.  Then, get your medicine on! 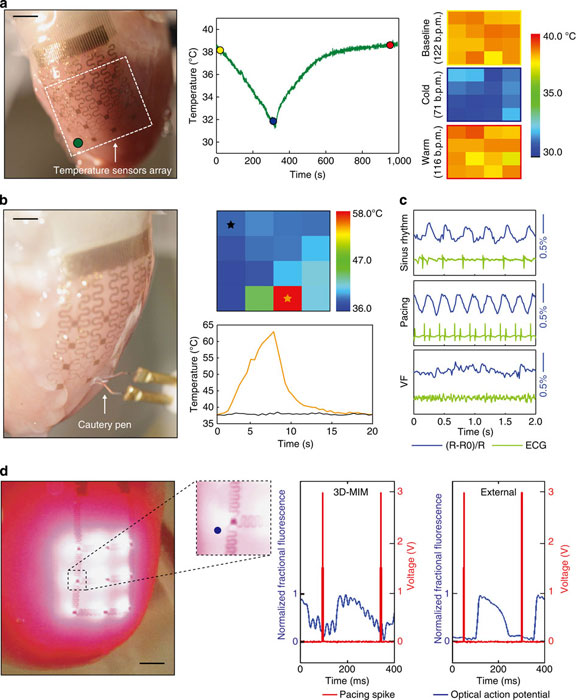 Igor Efimov, from the School of Engineering & Applied Science at Washington University in St. Louis, and a team of biomedical and materials scientists feel as though the above process is doable, having performed it on a reanimated rabbit heart.  Watch the heart below, beating with the help of “a nutrient and oxygen-rich solution”, according to the video’s description.

Dr. Efimov explains the advantage that the 3D-printed technique has over previous methods for tracking heart health, saying, “Each heart is a different shape, and current devices are one-size-fits-all and don’t at all conform to the geometry of a patient’s heart. With this application, we image the patient’s heart through MRI or CT scan, then computationally extract the image to build a 3D model that we can print on a 3D printer. We then mold the shape of the membrane that will constitute the base of the device deployed on the surface of the heart. Currently, medical devices to treat heart rhythm diseases are essentially based on two electrodes inserted through the veins and deployed inside the chambers. Contact with the tissue is only at one or two points, and it is at a very low resolution. What we want to create is an approach that will allow you to have numerous points of contact and to correct the problem with high-definition diagnostics and high-definition therapy.” Also essential to the new internal heart monitor is the transfer printing technique for imprinting the sensors, made up of silicon, gallium, arsenide, gallium nitride, metals, metal oxides,and plastics.  University of Illinois at Urbana-Champaign professor Dr. John Rogers is the research team’s co-leader, along with Efimov, having developed the sensor printing process. 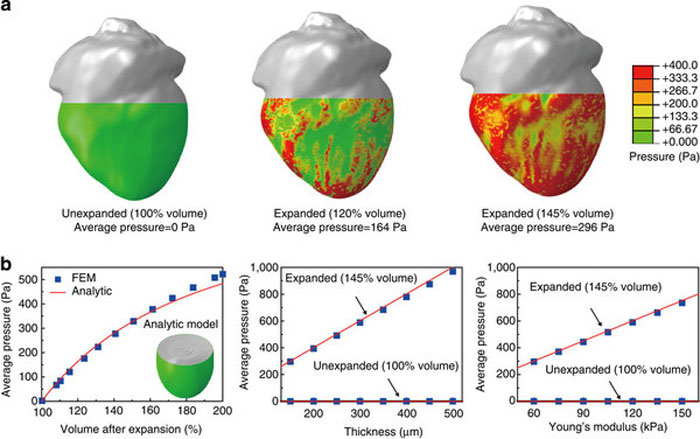 (a) Calculated pressure distribution induced by a device with total thickness of 150 μm and effective Young’s modulus of 60 kPa under various conditions of volume expansion of a heart geometry. (b) FEM and analytical results of average pressure as functions of volume expansion (left), thickness (middle) and Young’s modulus (right) of the membrane.”

Efimov points out that Google’s new glucose monitor for diabetics, which is installed onto a contact lens, is a similar, if less sophisticated, version of the device his team has created. “Because this is implantable, it will allow physicians to monitor vital functions in different organs and intervene when necessary to provide therapy. In the case of heart rhythm disorders, it could be used to stimulate cardiac muscle or the brain, or in renal disorders, it would monitor ionic concentrations of calcium, potassium and sodium. This is just the beginning. Previous devices have shown huge promise and have saved millions of lives. Now we can take the next step and tackle some arrhythmia issues that we don’t know how to treat.”