Recently, I was watching an episode of the Colbert Report in which the guest was Daniel Lieberman, professor of Evolutionary Biology at Harvard. Lieberman explained that the use of shoes in most of modern society has disconnected people from the physiology of their own feet. By wearing thick, protective shoes, people may run and jump in ways that do damage to their bodies because they are unaware of how their feet are receiving impact from the ground. So, when I was introduced to Earl Stewart’s XYZ shoe series, I began to understand the possible practical purpose for custom footwear. 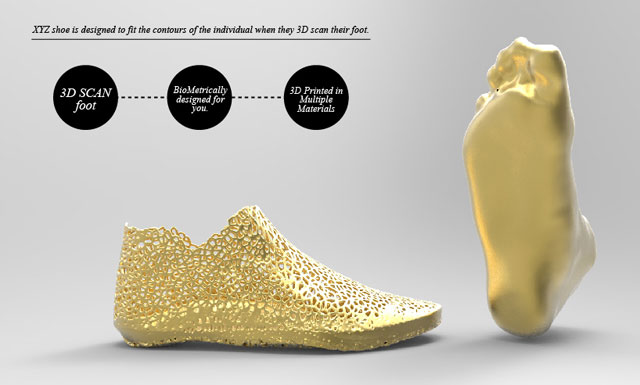 Industrial designer Earl Stewart has followed in the suit if his contemporaries (which you can see here, here, and here) by creating 3D-printed shoes customized to fit the exact shape of the wearer’s foot. He proposes the use of a Microsoft Kinect to scan the shape of a person’s foot to, then, print something that will mirror its contours. He’s also worked with a podiatrist to gain a better understanding of the human foot and how to craft a shoe that will ensure “maximum comfort, stability and foot alignment”, according to designboom. The scans are printed with the Objet Connex multi-material printer that, by printing different densities of rubber and plastic on a given layer, fabricate a custom shoe that both looks like an art piece and actually provides support. 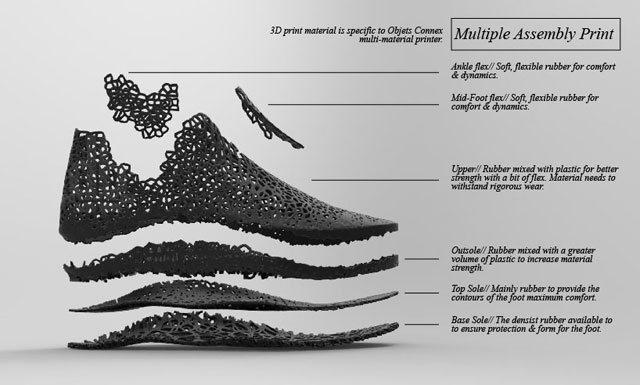 Looking at Stewart’s biometric footwear, I wonder if they might cause runners to use their feet in more considerate ways, if having shoes that wrapped so closely around their feet would make them better runners. In an interview with The New York Times, Dr. Lieberman describes how, after one lecture a man, Barefoot Jeffery, with feet covered in duct tape came up to him asked why he, Jeffrey, was such a good runner.

So I asked Barefoot Jeffrey to come to the lab and show me how he ran. He ran in this beautiful way that was completely collision-free. Light as a feather. When he hit the ground, he didn’t land on his heel. Instead, he landed on the ball of his foot, and there was no shock wave that hit his head. That led us to producing another paper in Nature where we actually studied barefoot runners like Jeffrey.

We also went to Africa and went to people who’d never worn shoes. What we discovered was that people who run barefoot tend to run differently than people who wear modern shoes; they run in a much lighter and gentler way because it would hurt to run the way people do in shoes. 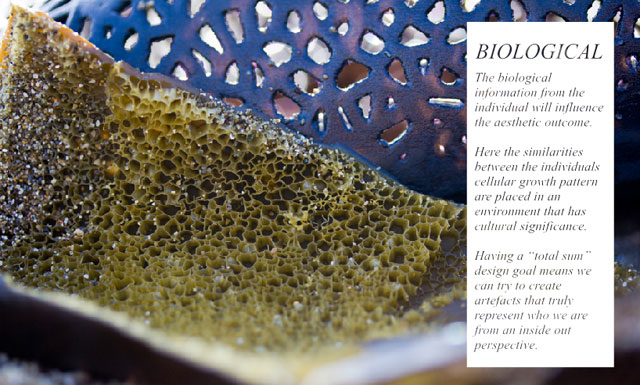 This leads me to believe that 3D printing will not just lead to designs that are custom in terms of aesthetics, but from a practical point of view as well. So we won’t just see people personalizing items with all sorts of wild, but extraneous, features (sneakers with printed fins and hooks and hood scoops). We’ll also see items actually personalized to serve a biological purpose, straightening pigeon feet and giving arch support to flat footers.  As Stewart puts it, with 3D printing, “we can try to create artifacts that truly represent who we are from an inside out perspective.”