Happy 4th of July, readers! For those of you who are unfamiliar, July 4th is the day on which Americans celebrate their independence from the Queen by drunkenly shooting explosives into the air within feet of their young ones. In honor of this holiday, I’m bringing you an American take on a British cultural phenomenon: the Tardis Transformer. 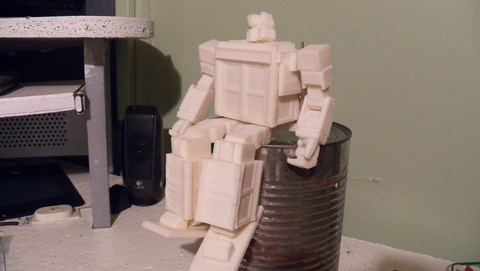 User nonnef at instructables has detailed instructions on how to create your very own Tardis Transformer so that you can print out a mash-up of your two favourite shows: Transformers and Dr. Who. If you’re as unfamiliar with these shows as you are with American Independence Day, Transformers is a beloved cartoon turned behated film franchise about identity-bending robots. As for Dr. Who, don’t tell anyone, but unfortunately, I’ve never seen Dr. Who, so I’ve asked my friend Scott to tell me about it:

Doctor Who is an 1100 year old Time Lord; he’s the last of his kind and he travels around space-time with human companions, generally young women, and has adventures and saves the universe. His time-ship, the TARDIS (Time and Relative Dimension in Space), is a sentient time machine/spaceship that is bigger on the inside than it is on the outside. In fact, the inside of a TARDIS is completely limitless, much like the universe itself.

Download and watch these two episodes and you’ll get a good idea of what the series is about:

There. Everything that you ever wanted to know.

What Scott forgot to mention, among other things, is that the TARDIS looks like a “police box”, which I imagine is some sort of phone booth for British emergencies.  And, with its limitless nature, user nonnef thought that it could easily take the form of a transformer. 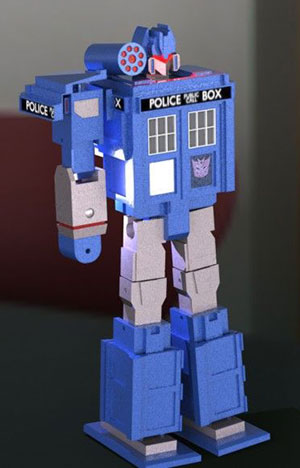 After first modeling the design with clay to test its feasibility, nonnef created the .stl files for printing. The total print time is over 20 hours, but nonnef claims that snapping the parts together is, well, a snap. And, you can download and print Soundwave’s head or Vector Prime’s, depending on if you want to go evil or good. Personally, I think that Decepticons are cooler and plan on printing out the Soundwave version.

If you’ve got the patience and time to print and put together 36 pieces, you’ll have something that you can put a lot of work into just to watch blow up on this wonderful and dangerous holiday. Happy 4th everyone!