The Uplift Prize: Uplifting 1 Billion People at a Time with 3D Printing

Unsurprisingly, the Uplift Prize, formerly the Gada Prize, intends to do exactly what its name implies: award contestants for lifting up the standard of living for a given population. The scale of its effect, however, is somewhat surprising. By giving out prizes that total $1 million to individuals that can design key technological innovations over the next 7 years, the contest’s founder, Kartik M. Gada, hopes to greatly improve the lives of 1 billion people by 2020. And he’s already begun with one key technology: 3D printing. 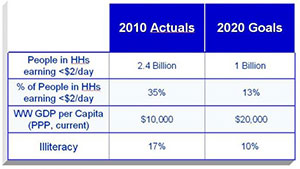 With a background in finance and technology, Kartik Gada was always interested in how technology could be used to alleviate poverty. In an e-mail, he told me that, “I always felt that traditional poverty-driven charities a) have a lot of overhead, and b) are oriented around handouts rather than tools and skills.” But, by providing technological access to groups without such resources, he believes that impoverished groups might develop a self-sustainable method for escaping poverty. Using Gada’s metaphor choice, instead of giving them a fish to eat for a day, you teach them how to fish, so they can eat for life. So Gada decided that he wanted to figure out specific technological innovations that would reduce global poverty in the quickest and most affordable way possible.

That’s when his friends and colleagues, J. Storrs Hall and Dr. Forrest Higgs, introduced him to 3D printing. Gada described his reaction to the RepRap community saying that “these are people spending time as a hobby, so obviously doing it for free – they are working on something that is self-replicating. How do we channel that into something that can help the very very poorest people?” He believes that access to such self-replicating 3D printers would allow poorer communities to manufacture their own goods for personal use and to compete against the impossibly low costs of Chinese mass manufacturing.  Simultaneously, with the ability to recycle plastic waste found littering so many poor communities, such as the slums of Rio de Janeiro, and use it to print useful items, people in these regions can also clean up pollution.

So, to kick off the Uplift Prize series, he has begun with the Personal Manufacturing Prize, already in progress. The PM Prize, launched in 2010, is broken up into two parts. The first, the Interim Prize, is a cash prize of $20,000 and will go to the designer or team of designers that create a RepRap that meets the following qualifications:

– Can be assembled from its components to a fully working state most quickly by one person,

– Requires the least skill and experience from that assemblyperson,

– Has a low total one-off materials and parts cost,

– Has a high proportion of its own parts that it can print for itself,

– Requires a minimum of specialist parts that it doesn’t make for itself,

– Has a low power requirement when running, and

By breaking the prize up into two parts, Gada hopes to maintain the open source nature of the RepRap Project.  With the announcement of the Interim Prize winner on June 30, contestants will have a chance to build upon the successes and failures of all of the machines entered into the contest so that they can improve their designs for the next round.

The second part is the Grand Prize, with a deadline in 2015 and an award of $80,000, in which the winner must have a printer that operates as follows:

-That the cost of the material used for printing does not exceed $4/kilogram.

-The capacity to print a full set of parts for a complete replica of itself within 7 days, including the time for reloading, and clearing of printer head jams.

-Maintain a total materials and parts cost under $200 and that 90% of the volume of the printer parts be printed.

The judges of the contest are not able to disclose any of the entrants, but the contest is meant to be open-sourced.  RepRap designers must outline their plans online, including 3D models for their parts, so it’s possible to see some of the entries during the judging process.  In fact, we’ve already reported on two here at 3DPI: the RepRaps Morgan and Simpson.  As part of the submission process, contestants must submit a video describing their printer and how it meets the criteria of the Prize.  Below is a video of one submission for the Interim Prize, the 3DPrintMi:

The PM Prize is only the beginning. At the same time that Gada launched the Personal Manufacturing Prize, he introduced the Water Liberation Prize, meant to inspire the creation of technologies that make water purification so cheap that those living in areas without clean drinking water, 2 billion humans or 30% of humanity, can avoid such widespread problems as cholera, dysentery and dehydration just to get their most basic need met. Here are the conditions for the Water Liberation prize, which will be awarded on December 31, 2015.

The winner of the Water Liberation Prize of up to $50,000 will be the first person to invent a device that is either solar powered, manually cranked, or otherwise not dependent on the existence of an electrical grid, can produce at least 4 liters of potable (drinkable) water per day, either condensed from the air (as measured in approximate 50% ambient humidity) or filtered through a nanomembrane, and can be mass-produced (as demonstrated by a pilot run of no less than 10 units) for a cost of less than $3 per unit. The filter should be washable and re-usable, without requiring a periodic supply of new filters, as the device may be used in areas without access to a suitable distribution channel.[1] 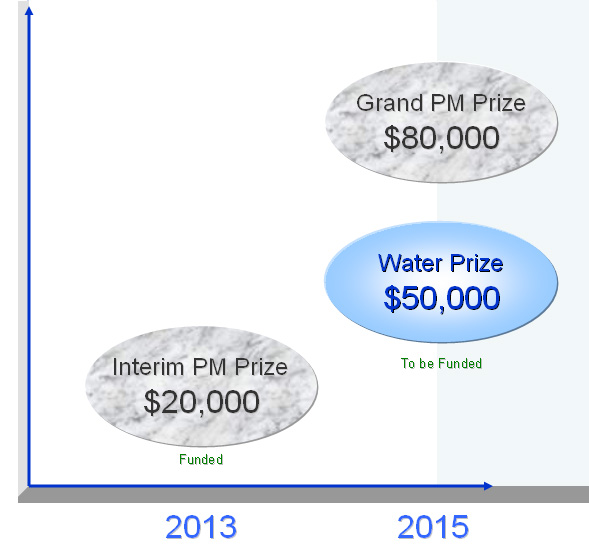 While the Interim Prize has already been funded with a large portion of Gada’s own money and a donation from the father of the RepRap, Adrian Bowyer, via a Google-related grant, the funds for these next two prizes have not yet been met.  The philanthropist isn’t fretting, however.  He believes that, through a large-scale media campaign, he will have no problem meeting the 2015 deadline.  This is what partially separates the Uplift Prize from something like the X Prizes, in his mind.  Because the X Prizes are usually large sums of money, ranging in the millions of dollars, they can only be funded by very wealthy individuals.  The various awards of the Uplift Prize are on a smaller scale, which should render fundraising a bit easier.  Gada hopes that the smaller scale of his awards could even inspire other individuals to create their own spin-offs, leading to a domino effect of innovation competitions.

Because I was so impressed by the concept of the Uplift Prize, I asked Kartik if he had ever done something like this before and what he’s learned about launching such a charitable project so far.  He explained that he has never, in fact, done this before and that he’s already learned a lot, saying:

I learned that when running a one-man-show operation, with all-volunteer support, the biggest challenge by far is my own procrastination.  I intended to do a lot more fundraising and PR by this time, but have not been able to string together the momentum, which tends to happen in self-directed, volunteer efforts.  This leads me to often question whether I realistically am going to execute on the mission statement of creating 6-8 prizes across multiple technologies, by 2020.  However, as exposure grows, more wonderful people are coming forth to volunteer.

And, thankfully, he’s been able to host his first prizes at Humanity+, a non-profit dedicated to transhumanist projects that will make Uplift Prize donations tax deductible.

I was also impressed with Gada himself, having the energy and heart to develop such an ambitious series of contests with a seemingly purely altruistic intent.  When I asked him my favorite two questions, I wasn’t let down with the responses.  His answer to the question “what is reality?” was this:

Technological Progress increases exponentially… a lot of people ‘know’ this, but don’t truly see it in their day to day life… Technological change is now part of everyone’s reality, more than before.  Most people’s reality is very different than even 10 years ago.  Except, of course, the very poorest.  The Uplift Prize aims to get them into the curve too…

Fair enough, Mr. Gada. Then what’s the meaning of life?

To increase net happiness.  That means both in oneself and in others.

Whether or not that last answer is true, who knows? But it’s certainly good enough for me!

For full rules and more information about the Personal Manufacturing Prizes and the Water Liberation Prize, click on the link here.

[1]A friend who worked with me at my parents’ clinic in Bolivia actually tried to rig up a fairly cheap, solar-powered water filtration system. It may not have been the best solution, but its proof that this contest is not impossible!