It seems we have the first proprietary name for an application of “4D Printing”. Coming from Nervous System, a generative design studio, which was founded in 2007 by Jessica Rosenkrantz and Jesse Louis-Rosenberg, Kinematics is a project that has resulted from Nervous System’s collaboration with Motorola’s Advanced Technology and Projects group, initiated earlier this year, and fulfilled using technology from 3D Systems. The aim of the original brief for the collaboration was for Nervous System to “create in-person customisation experiences for low cost 3D printers.” The result — Kinematics — certainly fulfills that brief but also has many wider implications for 3D printing. 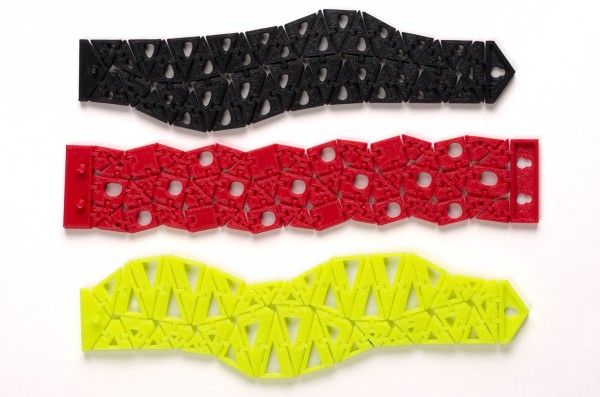 Nervous Systems describes Kinematics as “a system for 4D printing that creates complex, foldable forms composed of articulated modules. The system provides a way to turn any three-dimensional shape into a flexible structure using 3D printing. Kinematics combines computational geometry techniques with rigid body physics and customization. Practically, Kinematics allows us to take large objects and compress them down for 3D printing through simulation. It also enables the production of intricately patterned wearables that conform flexibly to the body.”

This is not a wholly new phenomenon there have been many demonstrations of 3D printed “fabric” over the last few years, enabled by the powder-based 3D printing processes to produce fluid creations. The best examples I have seen to date were from D2W and of course, Ping Fu’s scarf earlier this year, but Kinematics supersedes those. Also, I’m not sure the 4D printing connation fits here — it’s tenuous at best.

But, that should not take anything away from what Nervous System has done here, which is to enable the customisable production of “designs composed of 10’s to 1000’s of unique components that interlock to construct dynamic, mechanical structures. Each component is rigid, but in aggregate they behave as a continuous fabric. Though made of many distinct pieces, these designs require no assembly.” And, more to the point, they have made this type of design customizable and accessible to consumers. As I mentioned previously, this type of design has generally been used as a show-off piece by 3D printing vendors — invariably garnering ‘oooh’s’ and ‘aaah’s’ — and/or used by high-end designers in work that was beyond the reach of most people.

To this end, Nervous System has now released a jewellery collection together with an accompanying customization app built on the Kinematics concept. The company has also released a second, simplified, free to use,  application for desktop 3D printers. 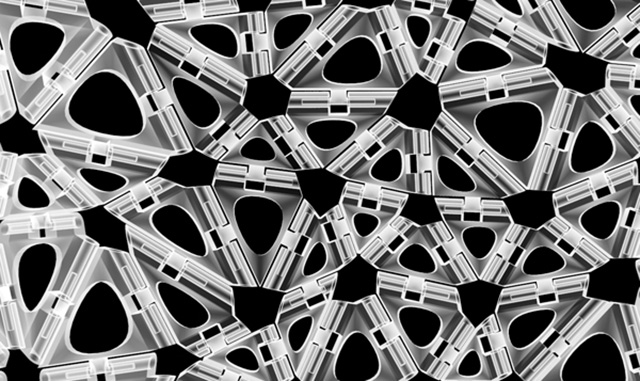 Within the Kinematics jewellery collection, each design is a complex assemblage of hinged, triangular parts that behave as a continuous fabric in aggregate, to conform closely to the contours of the human body. This is 21st-century jewellery, designed and manufactured using techniques that did not exist just a few years ago. The jewellery is offered in four styles — smooth, angular, polygonal and tetrahedral — and each is fastened simply and securely with hidden magnetic clasps. Nervous System has added eighteen Kinematics designs to its shop, and a limited initial run of each is currently available for purchase.

The Kinematics app allows for the creation of necklaces, bracelets and earrings. Users can sculpt the shape of their jewellery and control the density of the pattern. Designs created with Kinematics can be ordered in polished 3D printed nylon in a variety of colours, which will be produced by a 3rd party.

The Kinematics @ Home app is targeted at people who already have access to a 3D printer and allows users to download an STL file for home printing by entering their wrist size and style of bracelet required. They will then receive a free STL file.

Beyond the jewellery range, Nervous System has also been working on larger scale products with more advanced software with broader practical applications, an example of which is a flexible dress that can be printed in one piece.

The video below highlights the process: