The almost 14 foot tall gigantic animatronic creature named Bodock, that recently made an appearance on the Jimmy Kimmel Show before being the guest of honor at Comic Con in San Diego, certainly attracted global and local attention. As Bruce Bradshaw, Director of Marketing at Stratasys, told 3DPI, it was an impressive project that highlights many of the advantages that 3D printing can offer to the entertainment industry, but it might be just the beginning of even bigger and better things to come. 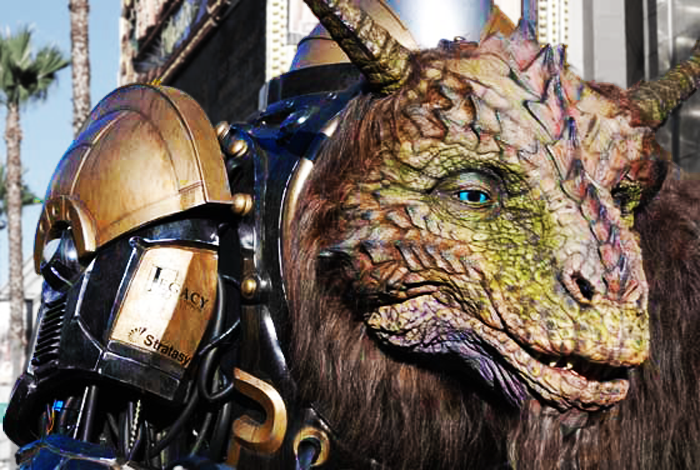 “Stratasys’ 3D printing technologies, polyjet in particular, but FDM as well, have been very well received by the entertainment industry for a while now,” says Bradshaw, who arrived at Stratasys following the Objet merger. “Special effects artists can use polyjet’s digital materials to create shapes in rubber and plastic.”

Using 3D printing for special – or physical – effects is not something entirely new. The real difference is that, now, top special effects artists can show how they use 3D printing behind the scenes because the public is more familiar with – and definitely a lot more interested in – how these technologies work.

“Just five years ago if you mentioned 3D printing people would have no idea what you were talking about,” continues Bradshaw. “Now, if you happen to say you work in 3D printing, you end up talking for hours about what you do. A lot of that has to do with a more public use of 3D printing by some of the biggest players in the entertainment industry for high profile projects.”

To underline his point, Bradshaw mentioned examples such as Disney Research’s always evolving Printed Optics project, developed in close partnership with Stratasys, as well as the adoption of 3D printing by huge production studios, like Bad Robot (owned by Star Trek and Star Wars Episode VII director JJ Abrams). Many of these companies have been among the first adopters of Strastasys’ new Objet 500 Connex 3 multi-material and multi-color polyjet 3D printer.

“The entertainment industry as been gravitating toward 3D printing and there is little doubt we are one of the companies that most focuses on this aspect, introducing versatile systems such as the Connex 3,” says Bradshaw.  He adds, though, that this system has been adopted by a wide variety of companies, like those in the sports industry, as well as those in electronics and even in tooling, such as Home Depot. 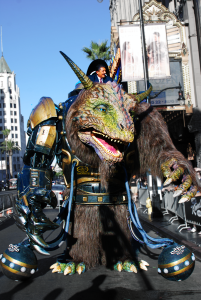 The Bodock project involved the use of the Connex 3, as well as a Fortus 400 and a Fortus 900, which are both high-end, FDM-based systems. Being able to 3D print as many as a third of the creature’s parts was a great advantage offered by 3D printing and it was not the only one.

“Something that special effects production studios appreciate is the possibility of creating a miniature version of any prop they are working on; this helps them unleash their creativity,” Bradshaw explains. “They can view it, test it, rotate it and see it from all angles at the same time. Being able to see a product before you produce it is something than any designer can appreciate or, as we often say, if a picture is worth a thousand words, an object is worth a thousand pictures.” 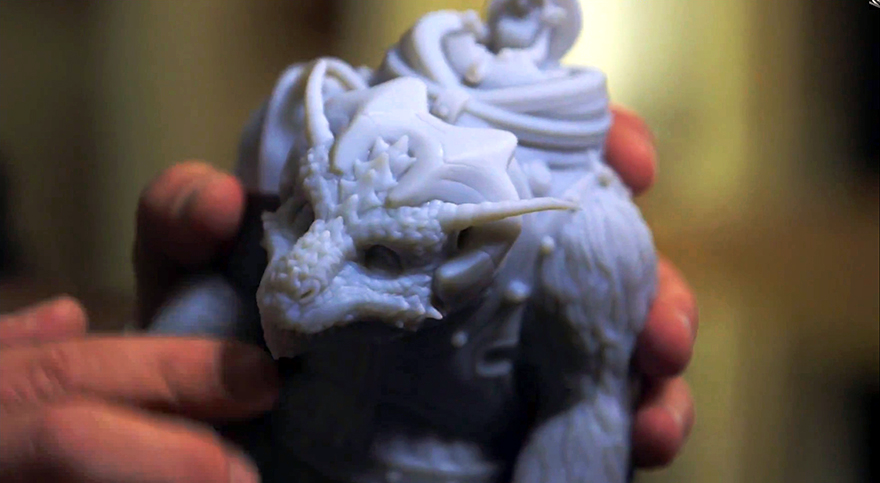 Legacy Effects has been working with Stratasys for a long time and the idea for the giant creature actually comes from Legacy Effects’ Lead Systems Engineer Jason Lopes. To be precise, it stems out of a project the two companies “improvised” during the 2013 Comic Con, when they build a mech robot in less than 3 weeks for the first season of the How to Make a Giant Creature show. For the new edition of the show, which is airing on Condè Nast’s online video channel, TheScene.com, the project had a lot more time and, therefore, just had to be a lot bigger.

“Jason Lopes and Legacy Effects got together with the Wired team to create something that would be worthy of a blockbuster movie and they, naturally, contacted us to partner with them as we have been working together for so long,” adds Bradshaw. The increasing adoption of 3D printing by the movie industry can show the many possibilities of the technology to the public, but it also reflects the great adoption of 3D printing at all levels. A new manufacturing revolution is already on its way.

“Many of the Fortune 500 companies that have been partners with Stratasys for years on rapid prototyping have now begun implementing 3D printing into final manufacturing,” says Bradshaw. “We are already seeing this happening on a large scale and it is contributing to Stratasys’ organic growth by 30% year on year.  And that is without considering acquisitions. We are going to see the industry change dramatically over the next 5 years”.

In a way, the size of the creature in How to Make a Giant Creature reflects the size of the 3D printing industry. At the current growth rate, we probably cannot even begin to imagine what awaits us next year. “I cannot confirm or deny we are going to have a season 3, but if we did, it would certainly be something truly amazing”.