Legacy Effects is one of the premiere special effects studios in Hollywood and its long standing partnership with Stratasys has given us lots to marvel about lately, especially as far as realistic looking 3D printed creatures go. Their latest creation, a 13.7 ft gigantic monster named Bodock, has set the bar quite a bit higher for those that will follow. 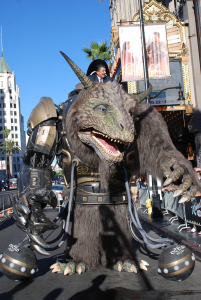 Stratasys and Legacy Effects have worked together on physical effects (i.e. tailor made armour and creatures) for blockbuster movies such as Avatar, Iron Man, Pacific Rim and the latest Robocop, demonstrating how 3D printing is enabling the entertainment industry to bring highly detailed objects from fantasy worlds into the physical realm. This project, which debuts at Comic Con in San Diego today, is the most ambitious yet. It will be the main attraction in the upcoming “How to Build a Giant Creature” series, on Conde Nast’s TheScene.com video website.

The creature’s very first public appearance, however, was on the Jimmy Kimmel show, where it gave quite a performance, interacting (with nonchalance) with both the host and a crowd of curious onlookers of all ages.

“Everything about the giant creature project was ambitious, including size, weight, delivery schedule and performance requirements,” said Matt Winston, co-founder of the Stan Winston School, that worked with Legacy Effects on designing and developing many of the creature’s 3D printed parts. “Without the close involvement of our partners at Stratasys, whose 3D printing technologies are, in our view, revolutionizing not only the manufacturing industry but the entertainment industry as well, none of it would have been possible.”

These mechanical creatures existed in the past, but it used to be so much more expensive and time consuming to make them that they could only be produced for huge blockbusters with even bigger budgets. Now, at a fraction of the cost and time, Legacy Effects can use Stratasys technology to make a much more realistic looking monster and send it on to Comic Con. 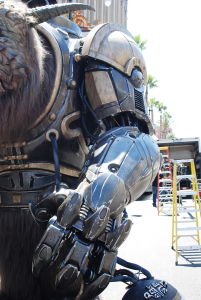 More than one third of Bodock was 3D printed, including the chest and shoulder armour, arms and fingers. Different technologies and different size machines were employed, including the extra large Fortus 900mc, which can 3D print parts as large as 36x24x36 inches utilising FDM, a technology particularly suited for functional parts with good mechanical properties.

“3D printing is opening up an entirely new world of possibilities in nearly every industry, including entertainment,” said Gilad Gans, President, Stratasys North America. “The giant creature represents the perfect marriage of technology and art coming together in an innovative way.”

For me, though, the big news in this story, and possibly for those who work in the 3D printing industry, was the ease and recognition with which Jimmy Kimmel pronounces Stratasys’ name, along with that of the other partners, demonstrating he is already familiar with it. And when a talk show host like this knows your name, it means you have made it into popular culture. After working behind the scenes in just about every manufacturing sector, 3D printing might be about to become the star.