Remember Linkin Park? You know, “I’m one step closer to the edge and I’m about to break…”  Who knew that those words would become so relevant to the band 18 years since its inception, as the band takes on its fragile 3D printed form, perhaps near the edge of a coffee table and, if knocked off, about to shatter into tiny clay pieces.

After Staramba had scanned the band during their “The Carnivores World Tour 2014” in June, their prints are finally available for sale on the German company’s website.  You can purchase all six members as 1:5 or 1:10 scale replicas, $499 and $149 respectively.  Or you can buy the whole band, on stage, at 1:20 scale for $295. Look how huge the 1:5 scale is! 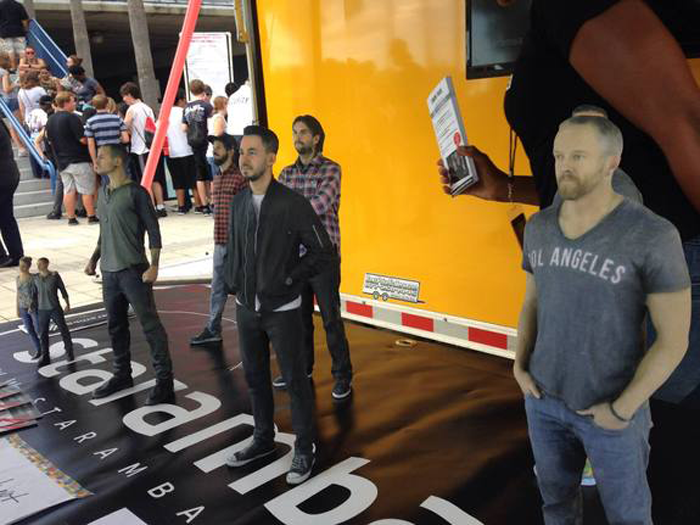 3D printed in full-color from polymer clay, Staramba ensures Linkin Park fans that “this figurine is a collector’s item and a fan memorabilia. It is not made for playing around with.” So, don’t get the wrong idea and give it to your kids.  And, if you’re a really, really big fan of the band, resist bringing the models to your mouth for any smooching, as the site warns, “Do not lick, swallow or eat parts of the figurine as it may your health including but not limited to suffocation and poisoning.”