Imagine being able to see the unseeable. And, on top of that, touch the unseeable — in the gel of your Nike airs, decorating your Macbook, and on the hubcap of your Ferrari. Or, if you happen to be an astrophysicist who studies dark matter, imagine having an object made of your numerical data anchoring the papers on your desk, or being passed around the classroom by your students.

In the depths of space and making up the fabric of our physical world exist phenomena so imperceptible, so small, that scientists can only study them through simulations, formulas, and theory, but Christine-Angel McLaren de Riordan – graduating out of the Trans-disciplinary school of the Ecole Normale Supérieure (ENS ULM) in Paris, France with a PhD specializing in spatial and aesthetic structures — has discovered how to make even the most complicated phenomena of physics tangible with 3D printing.

As an undergraduate at Princeton University, de Riordan coined the terms “seeablesTM”, “see-ablesTM”, and “Materials CosmologyTM”, before exploring the idea in more depth as a PhD student at ENS. Advised by Dan Garber of Princeton’s Departments of Philosophy, Politics, and History of Science, and Alain Connes of the College de France, her dissertation uses lateral thinking to look at difficult scientific phenomena in intersection with the humanities. Launching a field she calls “cosmologically-inspired engineering”, de Riordan is pursuing academic research to make difficult scientific phenomena accessible to a wider audience. In her trans-disciplinary doctoral program, she was a borsista in computational cosmology at Scuola Normale Supériore in Pisa, Italy (SNS), a visiting researcher at Princeton University in Philosophy, and began to make her see-ables a reality while a Visiting Fellow in Physics in the Spring of 2015 at Harvard University.

3D printing otherwise unobservable phenomena, such as dark matter, is no easy task, which is why Christine-Angel sought advice from expert scientists and mathematicians, which include Tracy Slatyer, Assistant Professor of Physics at MIT, Senior Research Scientist of the Wyss Institute at Harvard University; James Weaver; Federico Marinacci of the MIT Kavli Institute for Astrophysics and Space Research; and Mark Vogelsberger, Assistant Professor of Theoretical Astrophysics at MIT, among many others.

Relying on their advice, de Riordan has since established herself as the first person to create a 3D printed model of seeable dark matter. Dark matter is one of modern astrophysics’ great mysteries, but recent research has begun to explore emissions from dark matter through the use of the Fermi Gamma-ray Space Telescope. At the very core of our galaxy lies a dark matter search region, and, while dark matter extends far beyond the center of our galaxy, de Riordan chose this center region because it is the most dense, and where, theoretically, we expect stronger signal emissions. With gamma-ray information gathered from this research – provided to her by Tracy Slatyer, Assistant Professor of Physics at MIT – de Riordan was able to create what could be called a tangible print of the dark matter data. Right now, it is pocket-sized, and you can actually stare into the x,y,z coordinates of this dark matter data, here (back-lit): 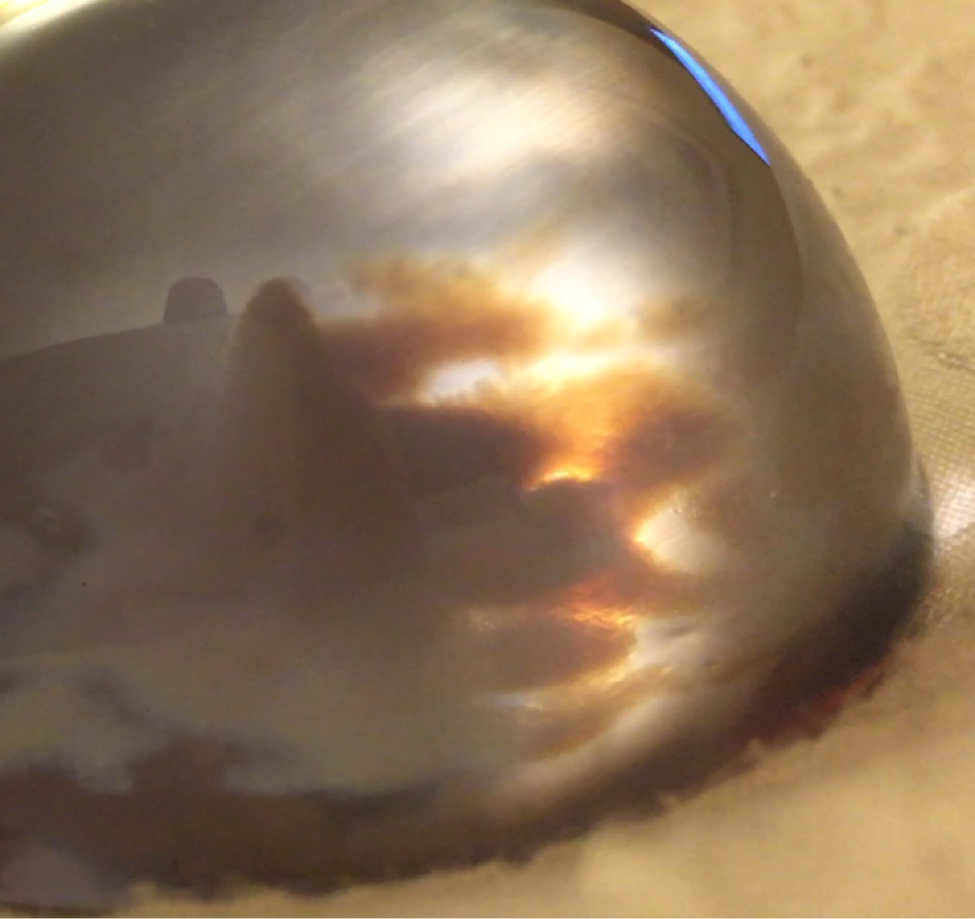 Another see-able uses data provided by Mark Vogeslberger and Federico Marinacci from the Illustris project of MIT and CfA Harvard. Illustris seeks to approach galaxy formation as a whole, including the development of our own Milky Way. To produce a seeable of a Milky Way-like simulation galaxy called Aq-C-4, she used the coordinates of stellar particles derived from this cosmological simulation, which is meant to model the formation of the Milky Way galaxy. In this type of simulation, all of the resources are focused on modeling a single object, whereas Illustris uses a more global approach. However, the underlying physical model is essentially the same. Christine-Angel has made this phenomenon tangible, and now that she has some prototypes, she is working on larger-sized end products representing the formation of the Milky Way.

Right now, the spatial architect is currently working to finish her collection, and is mid-creation on her next cosmological see-able based off of Daniel Eisenstein’s most recent findings from the Sloan Digital Sky Survey, with data provided by Eisenstein himself. De Riordan also plans to reveal more seeables that look at exciting data related to three-body problem of a rocket, Moon, and Earth based on weak stability boundary theory.

The benefit of these 3D printed phenomena for educational purposes is obvious, considering how models of the Solar System have become widespread tools for helping even the youngest of students grasp complicated concepts. Christine-Angel sees these 3D prints as taking education a step further into the world of popular culture. Unlike wearable technology created by companies like Apple and Samsung, see-ables have no gadget qualities. Instead, 3D printed models exhibiting highly abstract scientific phenomena might be slipped into one’s pocket, put on display, or even stitched into a piece of clothing to render difficult scientific concepts comprehensible to the lay person.

With experience as a fashion model herself in France and Italy, Christine-Angel also envisions the intrinsic spatial beauty of these objects as central features of photo shoots for fashion editorials. She also sees them as equally applicable to industrial design – decorative yet meaningful data embellishments for rockets, aviation, sports wear, race cars, computers and more. An upcoming shoot with Boston-based French photographer Tristan Govignon will result in an exposition at MIT or Harvard, for which de Riordan has received support from interdisciplinary professors such as Alan Lightman at MIT.

And, to make this application of her see-ables available outside of academia, Christine-Angel has launched her startup Materials Cosmology. An industrial design firm, Materials Cosmology weaves the fabric of the universe based on real data and equations into original design. Materials Cosmology, as a firm, is grounded in the view that the aesthetic architecture of the invisible realms is beautiful and mysterious; and, it takes this a step further, approaching how to learn from how nature engineers itself in the realms that researchers denote as hypothetically elusive. Chrstine-Angel tells me that the idea of thinking about an old problem in a new way is always going to be the backbone of Materials Cosmology. In applying exploring invisible realms of nature to our visible realms, industrial design takes on the hues of these remarkable exotic areas, by sleekly making everything more whole in perspective. After all, the entire universe is our universe, no matter the invisible or visible regions.

Most excitingly, while de Riordan has begun with the cosmos on the macrolevel, the physical picture of our universe wouldn’t be complete without the quantum world. In 3DPI’s next article covering her work, de Riordan will reveal what it has taken for her to tap into the quantum, using equations from a particular problem she has been working on given to her by Professor Alain Connes of the College de France. For the quantum, it is hard to make any kind of coordinate mapping system, as you can from real observable data, but it is possible. The quantum phenomena she represents with 3D printing have no observable data; rather, they are based on equations that are far too complicated to enter into even the most advanced CAD software. She is currently researching an eight-dimensional object and will share some of her methodologies in our upcoming interview. Soon, not only will we get a glance at 3D printed quantum data, but, through Materials Cosmology, we may even see that data printed into our designer products, or changing the way we think.