Smartest E-Scooter Uses 3D Printing to Get You Moving

After four years of intensive development and testing with Sculpteo‘s professional 3D printing capabilities, entrepreneur David Libault was able to launch an Indiegogo campaign which has already reached the initial funding goal of $50.000. ELECTRICMOOD is a pioneering urban scooter that would be impossible to develop by such a small team, low budget, and limited time without the extensive use of 3D printing technologies used for prototyping.

Although 3D printing was the only manufacturing method Libault was aware of for his needs – and, by far, the most affordable, easiest, and quickest manufacturing process to produce such complex prototypes on a limited budget – David Libault discovered in the process of designing his scooter that creating 3D models to be printed can be tricky.  The team at Sculpteo helped Libault to address and resolve those issues, so that the 3D printed prototype is now fit for injection folded mass production. 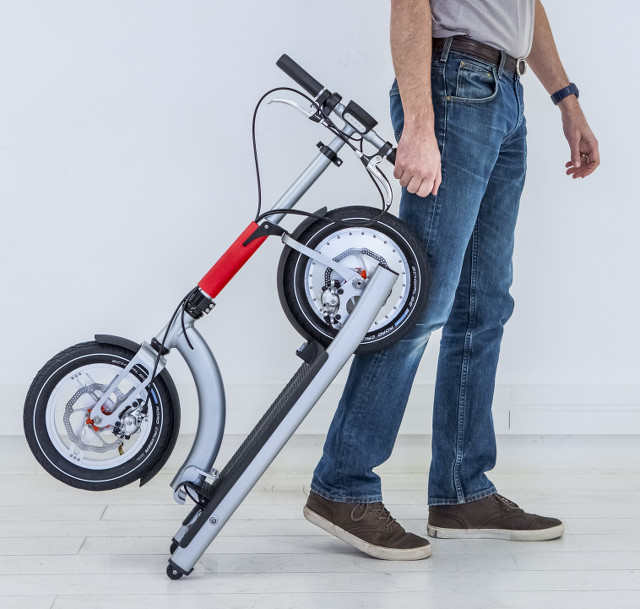 The main innovations in this electric scooter is its revolutionary brushless, high-efficiency, electric motor that keeps weight to a minimum, while offering enough power (500 Watts) for a seamless and effortless ride. Its performance is not exactly staggering, but it is more than sufficient considering its purpose is mainly that of urban transportation. It can move at a maximum speed of 26 kilometers per hour for a range of over 19 kilometers. After that, the user will have to recharge it, which takes less than an hour, and, thanks to the integrated charger, it requires nothing more than a standard plug, so that the scooter can be charged anywhere.

Although ELECTRICMOOD is a complete vehicle, with two 12-inch inflatable tires, two powerful disk brakes, a lithium battery, front, and rear LED lights, and a digital display, its total weight (including motor, charger and aluminum body) is only 10 kilograms. Add this to the fact that the scooter is foldable and you have one of the most handy pieces of urban transportation ever created. Moreover, it is almost completely silent and, since it produces no emissions, it is very environmentally friendly. Both factors are of key importance for urban transportation.

Last but not least, its price is very competitive, to say the least. This amazing e-scooter costs only $1.195, which is roughly the price of a low-cost and highly unreliable mass produced motorbike. Through ELECTRICMOOD’s Indiegogo campaign, you can  take it home at the even lower price of $995. Check it out in this introductory video below: