Based in Denmark and operating as a division under Global Scanning, Scan Dimension is a fast-rising competitor in the 3D scanning market space. The firm’s product portfolio is two-strong, comprising the original SOL and the higher-performance SOL PRO full-color desktop 3D scanners.

The SOL PRO is the more recent offering and is intended for small to medium part scanning applications. Much like its predecessor, the machine aims to combine affordability and accessibility, sporting a streamlined and automated scanning workflow that takes much of the load off the user. This isn’t to say it’s exclusively beginner-friendly, however, as there are still plenty of options and parameters for more advanced users to play around with.

Priced at just $1,899, the SOL PRO is perfectly suitable for makers and educators but is also geared toward commercial use in engineering and design firms. For context, industrial-grade 3D scanners are often available for around $15,000 or more.

Those seeking a turnkey 3D scanner need not look any further, as the SOL PRO is the complete package. Included in the box is everything you’ll need to begin 3D scanning, including the scanner and turntable, two cables, and a complementary black-out tent designed to create the perfect scanning environment.

The SOL PRO operates on Scan Dimension’s red laser diode technology, which is safe for unintentional exposure but not for extended periods of time, although this shouldn’t be an issue when scanning in the tent. The device also sports two w seehite LEDs to provide light and an 8MP camera for image capturing. This impressive combination of electronics allows the machine to scan objects with an accuracy of up to 0.05mm.

But what kinds of objects can the SOL PRO handle? The size and weight constraints are largely governed by the dimensions of the turntable, so there’s a minimum object size of 20 x 20mm, a maximum object size of 170 x 170mm, and a maximum object weight of 2kg. Thanks to the laser, the system should also be able to capture black objects much better than competing structured light technologies, all without the use of any positioning targets.

As with any scanner on the market, objects that are too reflective may still give the SOL PRO a hard time. To combat this, you can make use of a special primer spray or powder-coating spray to coat parts before placing them on the turntable. These sprays provide a matte finish that makes the parts less reflective, meaning the scanner has an easier time registering the geometry. 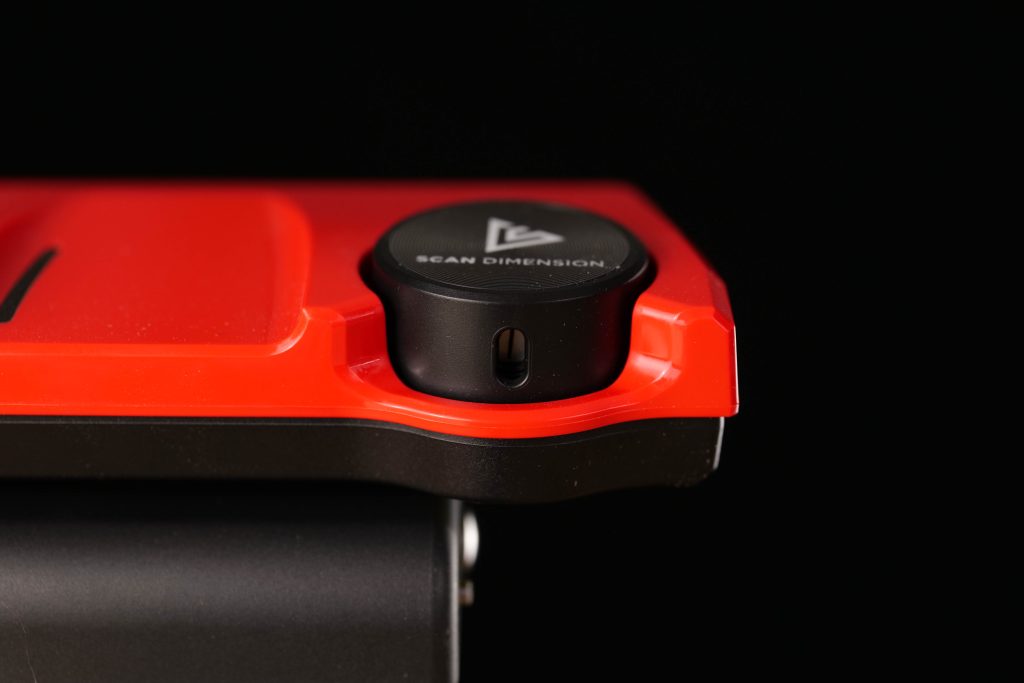 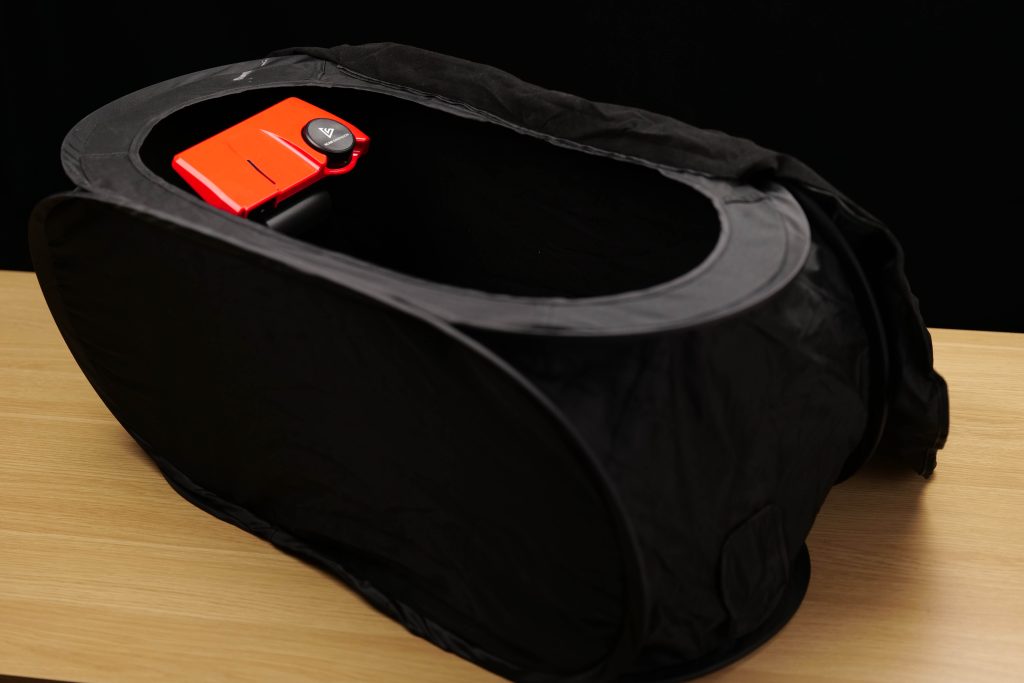 Scan Dimension markets its scanners with accessibility at the forefront, and this is evident in the SOL PRO’s calibration process.

To calibrate the machine before every scan, all the user needs to do is run the automated calibration process from the scan processing software (we’ll look at this in the next section). The SOL PRO analyzes the white sections of its own turntable and is able to determine its exact position relative to the scanning area based on just the circular patterning. The process usually takes a couple of minutes for normal and turbo mode and that’s it, you can begin scanning.

Since this is the higher-performance offering in the Scan Dimension lineup, the SOL PRO also features a ‘high accuracy profiling’ calibration method to further improve the quality of scans done on the system. To opt for this procedure, you’ll need to calibrate the SOL PRO using the small plastic calibration cylinder included in the box. Although slightly more tedious at around 13 minutes, we found the higher-precision calibration approach to be more than worth it, especially when scan quality is a priority.

Since Scan Dimension is really going for a streamlined user experience here, all you need to do to start a scan with SOL PRO Creator is hit Start, place the object on the turntable, and wait for the system to complete the scan. It’s possible to scan an object up to five times in different positions to capture sections that the scanner couldn’t catch the first time around, such as the underside.

Once complete, SOL PRO Creator automatically aligns the scans and opens the SOL PRO Viewer software to display the final 3D model. There’s not much to say other than the fact that this works and it works well, the one-click scan approach is as easy as it sounds.

For the more experienced users out there who want a more hands-on workflow, SOL PRO Creator also packs a number of configurable parameters. Specifically, there are options to exclude textures, scan unstable objects, and scan dark objects. SOL PRO Creator even allows you to manually align the scans in the event that the automatic procedure fails in some way, which we found to be extremely useful.

It’s worth noting that we did unfortunately run into several bugs when using SOL PRO Creator. This included being unable to install the software at all on one of our PCs, although this should indeed be resolved with the current version of the program.

Benchmarking the SOL and SOL PRO

It’s time to put the SOL PRO 3D scanner to the test with some benchmarks. We put the system through a variety of scan tests involving artistic models, 3D printed objects, and functional parts.

The first of the tests was a 100mm long benchmarking cuboid of known dimensions. We scanned the model and compared the resulting scan file to the original STL of the part, giving us a quantitative method of evaluating the scanner’s dimensional precision (as shown in the heat maps below). For our point cloud analysis, we used the GOM Inspect and CloudCompare software packages. 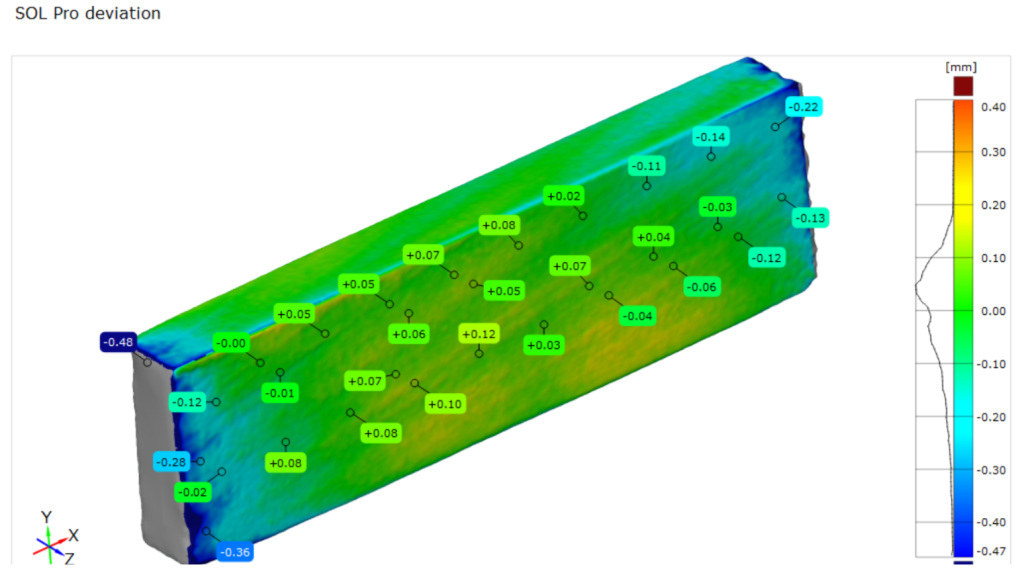 The precision of the SOL PRO was very impressive here, we obtained an average offset of -0.0188mm and a standard deviation of just 0.1127mm. For a system in this price range, this is a very small average imprecision and a very tight point cloud spread. To put this into context, when using this scanner you can expect 99.6% of your scanned points to be within -0.36mm and +0.32mm of their intended dimensions.

Then we tasked SOL PRO with scanning a set of generic full-color scan tests: a 3D Printing Industry trophy, a rubber duck, and a polymer head 3D printed on a Mimaki 3DUJ-553.

The SOL PRO really held its own with this set of full-color scans, capturing all the minute details in the models and recreating them very faithfully. The surface features of the trophy, the tiny surface bumps on the duck, and the fine wrinkles lining the head all came through successfully. However, it’s worth noting here that the SOL PRO scans did seem to have a yellow-like filter over them, whereby the colors on the models are slightly off from their true shades.

Next up, we 3D scanned a set of CNC milled ornamental models: a lion, a horse, and a triple helix.

This set of scans was definitively among the strongest on the SOL PRO. All three models were preserved with grace, with accurate texturing and shadowing to really make the models pop. The level of detail in the lion’s mane is particularly impressive as it looks very much like the physical part in the real world. The curvature of the triple helix is also noteworthy, with smooth surfaces and a distinct lack of jagged tesselation.

We then put the scanner to the test with a set of electronic components: a Raspberry Pi Zero, a PCB voltage converter, and a stepper motor.

The electronic component scans were the first time the SOL PRO really slipped up. The scanner failed to capture both the Raspberry Pi and the PCB voltage converter successfully, as both 3D models had a few missing sections. We even tried the voltage converter three separate times on the SOL PRO and still couldn’t get a clean model, which we concluded has something to do with the black and glossy surfaces. As previously stated, surfaces such as these will require a 3D scanning spray, so it’s good to have one ready at all times.

Similarly, the stepper motor had huge sections that failed to materialize. However, the sections that did scan successfully were almost lifelike with minimal warping. We were particularly impressed with the quality of the writing as it’s perfectly readable without zooming into the 3D part.

The final scan test was a set of six different tabletop models 3D printed in a matte grey resin.

The SOL PRO went above and beyond on the 3D printed tabletop part scans. Each of the 3D models is faithful to the real thing, with an abundance of detail in the fine grooves and surface features. Here, the scanner’s performance approaches that of a full-fledged professional-grade system, despite being a fraction of the price.

The SOL PRO is one very impressive 3D scanner defined by its incredible ease of use. As such, it’s a great choice for beginners, educators, and those that simply don’t want to worry about technical details. More experienced engineering and design professionals may find the lack of advanced parameters somewhat limiting.

Scan Dimension has built its hardware to bridge accessibility with performance, and the SOL PRO delivers on that front. On the other hand, the software at the time of testing did suffer from a myriad of bugs that affected the saving of files and the installation process. Scan Dimension has since rolled out an update to fix these issues, so it’s nice to see the care being taken here.

When it comes to scan quality, the machine is capable of preserving finer details such as writing and grooves with ease, which is astonishing given a price tag of just $1,899. Although the device did struggle with the electronic scans, 3D textures on the other tests largely emulated their real-world counterparts. The colors of the models also seem to be slightly faded, but they’re true to life for the most part and accurately convey depth.

If you’re in the market for a full-color small to medium part scanning system without breaking the bank, we can safely say the Scan Dimension SOL PRO has proven itself to be a very cost-effective competitor in spite of its rough edges.